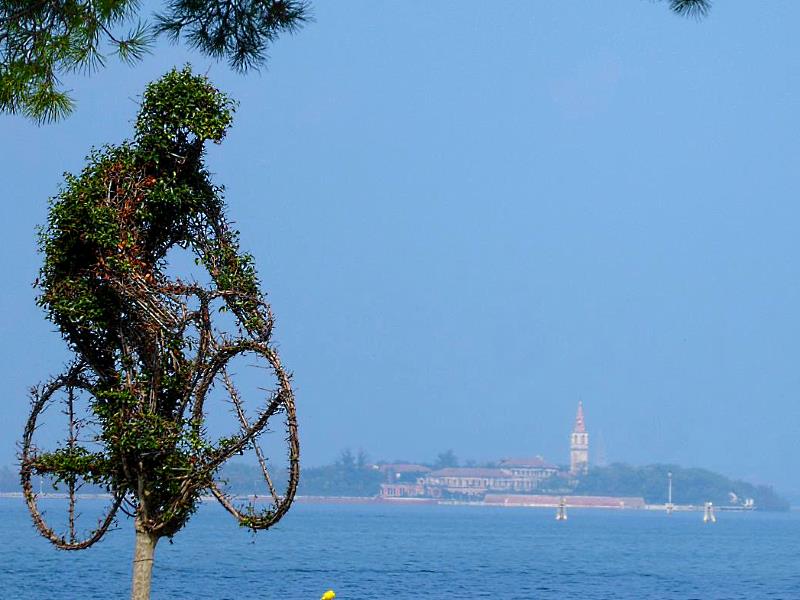 Ah, yes. Venice. La Serenissima, whose elegant centre has been car-free since the 1600s. Bike-free too, sadly: having emerged from the train station of Santa Lucia to the abrupt, astounding canalfront facades of the old town, you are informed by signs forbidding all bikes in the historic centre, even pushed. Nigel could have hidden his Brompton in a backpack, I suppose, had we wanted to beat the system.

So, yesterday, our explorations were all on foot, ending as we stumbled upon (and, later on, stumbled out of) a splendid, cheap little waterside local bar, still amid the canal-foot-alley zone, but in the western side away from the theme-park crowds of the centre. But today we got on our bikes for a Cycling Venice experience, and very satisfying it was.

We were staying in Mestre across on the mainland. From there a causeway runs a few kilometres across the lagoon to Venice proper. The Mestre-Venice bike path is largely a right old mix of scruffy make-do roadside lanes and cycleways with views of unserene chemical factories. But the segregated path on the causeway itself is rather atmospheric, with the flat shallow waters either side. At the Venice end, it’s excitingly cantilevered on wooden planks that make a satisfying racket as you clonk over them, the towers and domes of Venice on the skyline before you.

As stated, you can’t cycle into Venice centre. You can however dart south to a ferry terminal and get the boat across to the island of Lido di Venezia. The half-hour trip takes you along the south side of Venice, with sensational views of St Mark’s Square, and the tourist throngs.

Our jaunt down the Lido to Malamocco was an easy, flat, tranquil waterside experience in gentle sun. Not far – a handful of miles on the western side down to the cafe at the bottom, and the same distance back up the eastern side, along a slightly bumpy concrete path. No cars, a handful of cycle tourists, and about two million insects that periodically swamped us. A good incentive to keep my mouth shut.

We took the ferry back past St Mark’s again and cycled back over the causeway to Mestre, and our hotel. You wouldn’t go to Venice just for the cycling, but this trip is an enjoyable add-on to the walking experience – which is, it’s fair to say, not unpopular.