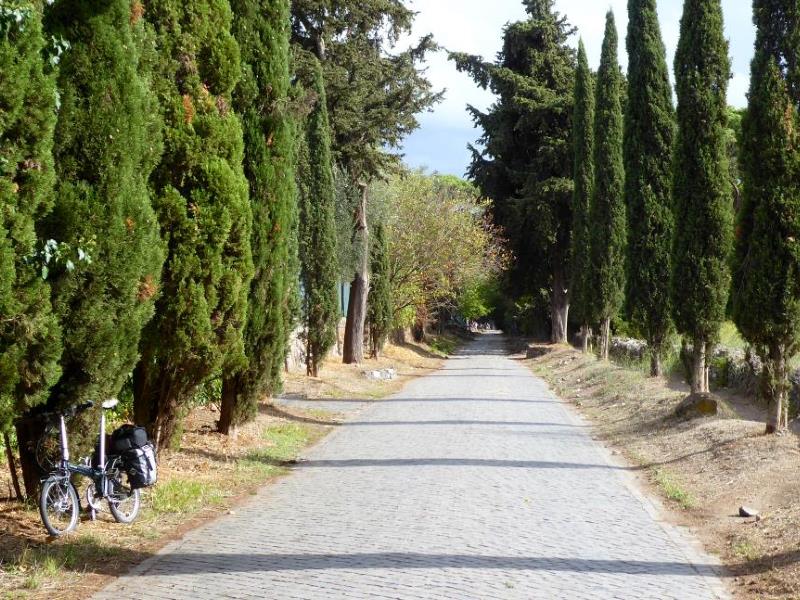 What was it like to cycle in Ancient Rome? To find out, we cycled the classic intact-Roman-Road stretch of the Appian Way, the Empire’s A1, which ran 365 miles from the capital down to the Brindisi. As the Via Appia Antica, it’s a popular hire-bike jaunt with visitors, going from the Baths of Caracalla in central Rome a few kilometres along busy road, quiet road, parkland and track. It’s lined with countless monuments, relics, buildings and remains that make it an outdoor museum.

We rode to the start of the old road from Rome’s central train station. It was hectic and slightly intimidating. Swirls and eddies of traffic surged with urgent unpredictability, often cutting across lanes and changing tack, with indicators either unused, ignored, or deployed in a token way post factum. More predictable was the double-parking, or as they call it in Italian, parking.

The first couple of miles of the Via Appia Antica does have a hint of ancient vibe, with the plain brown walls either side and lack of modern signs or buildings, but the bumpy brick setts we rattled over and the impatiently passing traffic were not a good mix.

But then it diverts – as Eurovelo 7 cycle route, in fact – through some parkland and past a cemetery. This did feel old-time, broad and tranquil and green and little developed, just a few isolated villas with light brown walls and red tiled roofs, the road itself lined by cypresses.

Alas it didn’t last long, just a mile or so. Then it was back to the bumpy setts. But that gradually turned into the classic old-time bit: a few hundred metres of the original Roman Road surface, and the closest we can get to imagining what riding a bike in Empire must have been like.

Well, it’s no wonder nobody did. You need full-suspension mountain bikes with fat tyres for the Appian Way. The old section would have been cushioned somewhat two thousand years ago by top layers of pebble, gravel and sand. Today though you cycle on the base layer of beanbag-sized boulders smoothed down by millennia of traffic, and by gum it’s rough.

Somewhere Nigel lost his enthusiasm for MTBing, and I lost my water bottle, jostled out from the cage by a sudden vault.

But I was happy. I’ve ridden the world’s most famous bit of Original Roman Road, or at least bumped and pushed and scooted along some of it. My tick-list of bike infra and cycle curiosities is done for the moment.

We clattered our way back and found more hectic city roads to our hostel. At a pavement restaurant I had the best spaghetti carbonara I’ve ever tasted. Thanks to the UK’s rapidly declining economy it cost more at the end of the evening than it did at the beginning.

Rather than heading home, perhaps I should be heading away, down the Via Appia…