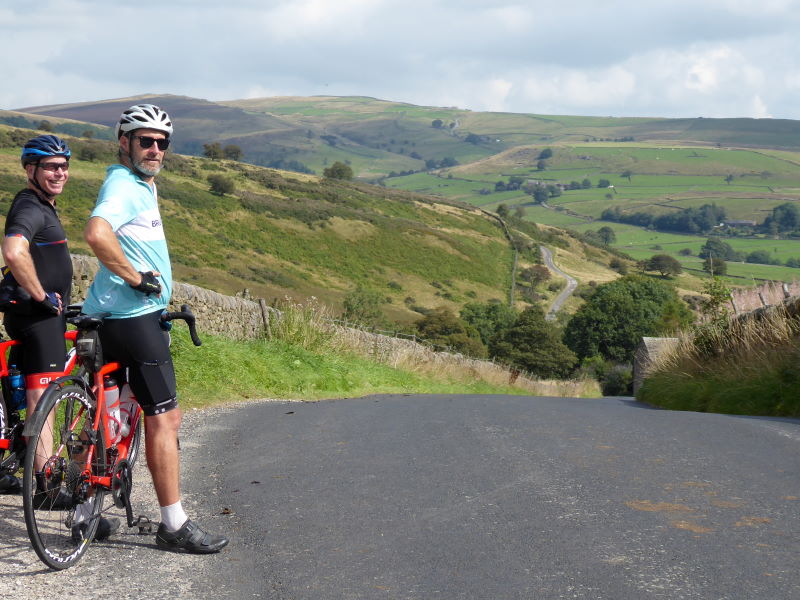 The Tour of Britain passed through the Staffordshire Peaks today. So did I, though rather slower. But with my pals Mark and Andy we cycled from Longnor through the micro-Dolomites by Earl Sterndale – a village, not a jazzman – and to Flash, the highest village in Britain. (Yes, higher than anything in Scotland: Wanlockhead in the Borders, Caledonia’s top settlement, is not quite as aerial.)

After Flash was a quite superb downhill west to the course of today’s ToB, one of the most scenic and exhilarating I’ve enjoyed in Britain. We deposited ourselves at Wildboarclough, got a quick bottle of local beer, and waited for the Tour to pass.

The buildup is gradual. Police outriders – most waving cheerily at us spectators – come by every five minutes, then every two minutes, then every minute, then in a bunch. It’s like contractions piling up before a birth. The commentary car goes through, its rooftop speaker clearly annunciating the state of the race to an almost empty lane. A helicopter whirrs overhead, and the team cars tailgate each other through this single-track road (cleared of oncoming traffic by those outriding coppers, of course) with forty grand’s worth of bikes on their roof (about four bikes, then).

And then, like a solar eclipse, whoosh! bang! wallop!, the race hurtles past in a few seconds, and it’s all over except for a few back-marking motorbikers. Today there was a breakaway group of five about three minutes up from the peloton, but they were eventually reeled in and Brit Nathan Hayter won the stage somewhere in Warrington.

We clearly had to wind down after all this excitement, which we did in a pub in Longnor, neatly avoiding some torrential rain. Somewhere today in all this, I had actually done some valuable route research too.