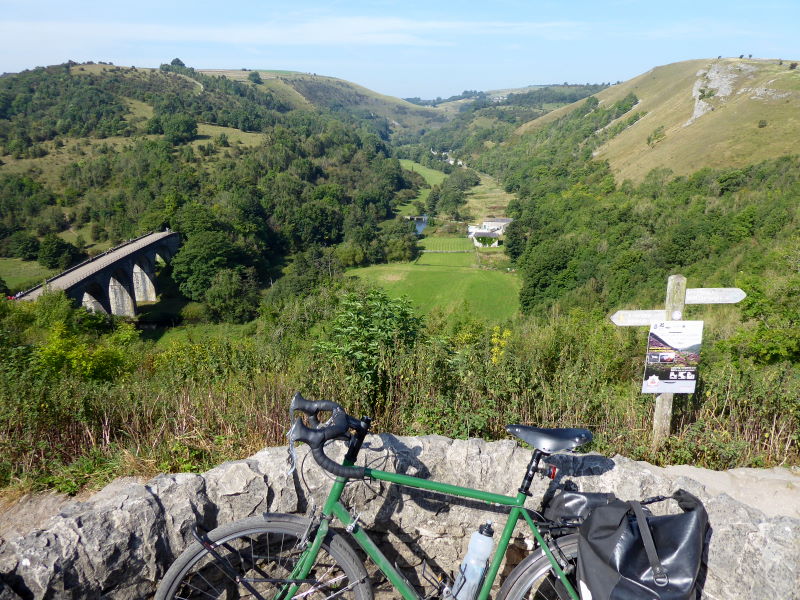 Hills, follies, stately homes, guardian angels for my lift driver, Bakewell Tarts in Bakewell, and one of England’s most spectacular views: another day to cherish.

No mist this morning: it was cloudless and warm as I left the tent at half seven, heading to Matlock north along the Cromford Canal’s decent towpath.

I came off to clamber up to Riber Castle, which down in Matlock appears as a mighty hilltop palace, but close up proves basically a facade whose inside is a dusty building site.

After some excellent plateau riding north I whizzed down the lane into Beeley, knowing I had it to myself: the road has long been closed because of a landslip, a common affliction for thoroughfares in these parts.

But closed to cars: not bikes. Concrete blocks like oversized lego bricks are arrange to exclude them and admit us. Hooray. I hurtled down with glee and streaming, but smiling, eyes.

I took the B-road (I can’t now look at the name of the England fast bowler without seeing it as ‘Stuart B-road’) past Chatsworth and branched off to Pilsley, which is almost as picturesque as its more celebrated neighbour ‘model village’ of Edensor, opposite Chatsworth itself.

I did put my nose in the Chatsworth Farm Shop thinking to buy a carrot or plum, but wasn’t sure of my overdraft limit, so left empty-handed.

So, in the sunshine to Bakewell. I had a mission here: first, to buy some whisky; second, to have a tart.

The first was easy. The Wee Dram is a shop well-known to lovers of single malts. I bought a bottle of Filey Bay Special, a rather superb example of Christmas-puddingy barrel-crafted whisky, made not in Speyside or Islay but in my very own home county of East Yorkshire (I cycled there a while back). It wasn’t for me, but for my pal Mark tonight, for reasons that will become evident soon.

Second was easy too, thanks to the Bakewell Pudding Factory nearby. Bakewell is associated both with Tarts (spongy cakes with a seam of jam, almond slivers on top) and Puddings (squodgier, marzipan-ier, tastier if you ask me). I ordered both and was later to find that many people claim you ‘can’t mention Bakewell Tarts in Bakewell because people will blank you/ lynch you etc’. Hmm. Well, when I asked for a ‘Bakewell Tart’, they happily sold me one, without organising a hate campaign against me on social media.

From Bakewell I took the Monsal Trail, which was very busy with families and leisure riders cycling, but also walkers, dog walkers, pushchair pushers, people in wheelchairs and all sorts besides. It was rather uplifting to throng with so many people in the hot sunshine, though I wished it wasn’t quite so hot when I pushed up the steep footpath and steps from the viaduct at Monsal for one of the most enthralling views in Britain: Monsal Head, sweepingly overlooking the railtrail and the valley.

From here I took a long downhill to Ashford, promised to me as one of the Peaks’ most picturesque villages, but given the amount of delightfully picturesque villages I’d cycled through, it just seemed average. After that came a steep climb through mercifully shady woods up to another plateau, and then another downhill to Monyash, then another uphill – my gears were getting quite a workout – to Parsley Hay.

And, finally, a long downhill to lovely Youlgreave (or Youlgrave: spellings differ across shops and even road signs) and a humdrum but acceptable run along the A6 (yes, the A6: it’s not too bad to cycle actually) back into Matlock and thence my campsite.

It was six, and I took down my tent and packed up waiting for my pal Mark to come and whisk me back to his house in Hathersage. He was on time despite his Audi having lost his exhaust somewhere at Chatsworth, thanks to a passing motorbiker just happening to be an exhaust fitter for Audi who made his car roadworthy again.

He transported me, bike and luggage back to stay at his place, plus a pile of fish and chips picked up en route, and – after a pause for Bakewell Tart – that whisky came into play.