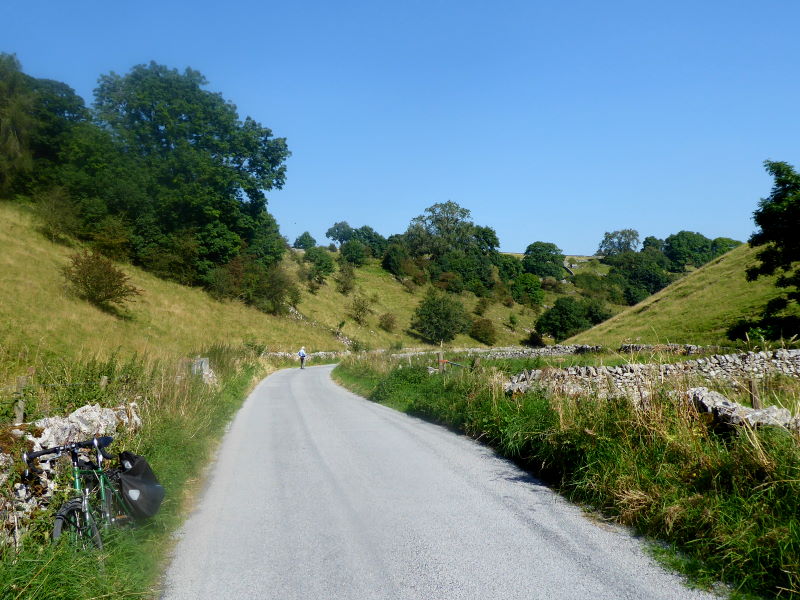 I found out what ‘doubly thankful’ means today, and it was nothing to do with finding a Co-op both open and with some reduced-price sushi, my usual post-ride twin-cause for celebration.

It was a misty, chilly morning, but by the time I’d climbed up and over the hill between Crich and Belper, the sun had burnt everything off. Belper proved not quite as picturesque as I’d hoped, but most importantly, its pedestrianised central street had a Greggs with a bench outside it. In-tent cereal only sustains you for so long.

The steady climb north out of Milford, south of Belper, got me to Alport’s collection of transmitter masts which looked like a plantation devastated by some fungal disease. Views from the top were OK, but better was to come.

A succession of downhills and uphills got me to Carsington Water again, and this time I stopped off at the Visitor Centre area to check out the shoreside cafe. It was cloudless and hot, and I quickly needed a bit of shade to scoff my snack chocolate biscuits. I only had one. Though, in the heat, it may have actually been six melted together.

Bradbourne proved interesting: it’s a rare ‘doubly thankful’ village, in other words one to whom all its fighting sons returned in both World War I and World War II. Only fourteen such villages exist, out of tens of thousands in Britain, none of them in Scotland or Ireland. Let’s hope there’s never a need to consider listing triply thankful villages.

After a dramatic ford, a stiff climb took me up to high lands to cross the Tissington Trail and pass through postcardy Tissington village itself, looking splendid in the sun with its fine Hall, and cafe chocker with cyclists.

Some, I gathered from eavesdropped conversations, had not cycled that far – only from the bike hire centre a hundred yards away, in fact. Well, it wasn’t a day to hurry.

At Ilam I treat myself to an ice-cream from the van, which seemed the only thing in the village, and set off up the lane north then east to Milldale. The road down to it had the steep-sided dry-valley feel of the Yorkshire Wolds.

It was a hard ascent out from Dovedale to Alsop and then the village of Parwich: a pretty gem with no distracting modern buildings amid the strapping stone cottages, like so many unsung places in the Peaks.

From here I headed north to Pikehall and then east back to Matlock, along a progressively narrowing lane that ended up plummeting down to Matlock from a ridge that had super views down to the valley.

All was quiet in the glorious mid-afternoon sunshine, except for sweet birdsong, the whisper of the breeze, and the occasional group of motorbikers deafening everyone as they ripped past.

With time in hand before dark, I sat at the basin picnic tables of the Cromford Canal with a snack and can of refreshment (OK: beer) in the honeyed evening sun, or perhaps it was buttery, or maybe liquid gold, or whatever. A group of schoolkids were learning to kayak, and it was a delightful little interlude by the waterside.

I watched the sun run through its palette of syrupy evening hues as it made the hills beyond my tent glow, and the memorial tower at Crich look like a lighthouse. Another splendid day.

e2e.bike > Other > Route research > Matlock 2: Double thanks for the memory