The penultimate day of the End to End, and the day I finally set eyes on the Baltic. Today started with yet more flat, easy miles on quiet back roads through woods, and finished with an extraordinarily 35km-long run through bike-friendly Gdańsk on segregated cycleways. I knew I was close to the sea when I saw a sign for ‘Baltic Restaurant’, but I must be missing a good curry: I thought at first it said ‘Balti Restaurant’. 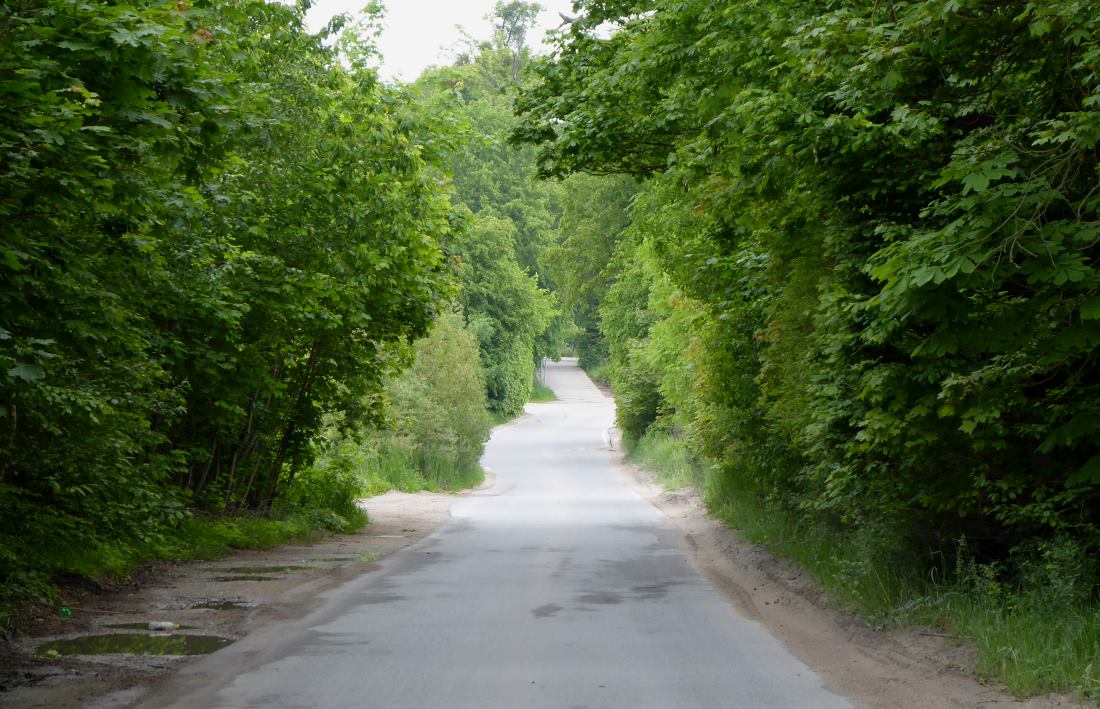 This was the sort of thing for the first half of the day (pic) – similar to most of the days so far, but with the addition of a few slopes. In the hilly North York Moors, they don’t bother to signpost hills anything less than 25%. In Poland, inclines are so unusual they even sign ones of 5%. 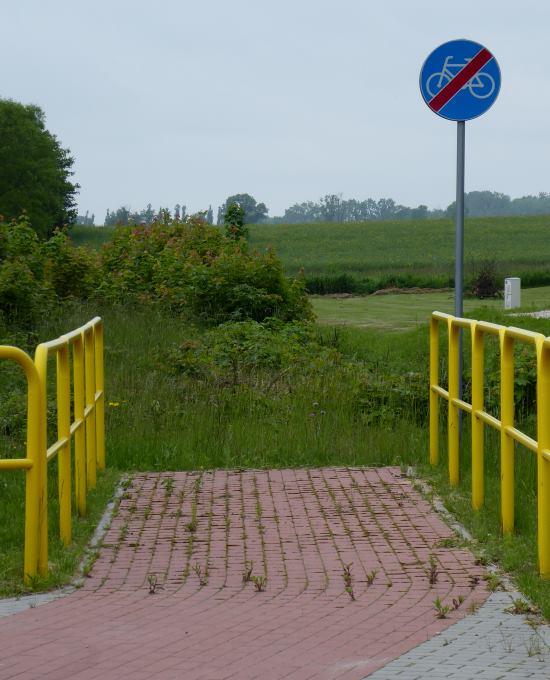 Poland is making great progress in putting in cycleways, and most cities I’ve been through have really pretty good segregated infra easing you into or out of the centre. (They haven’t got the hang of dropped kerbs though.)

Unless the councillors here have been inspired by factfinding missions to the UK. 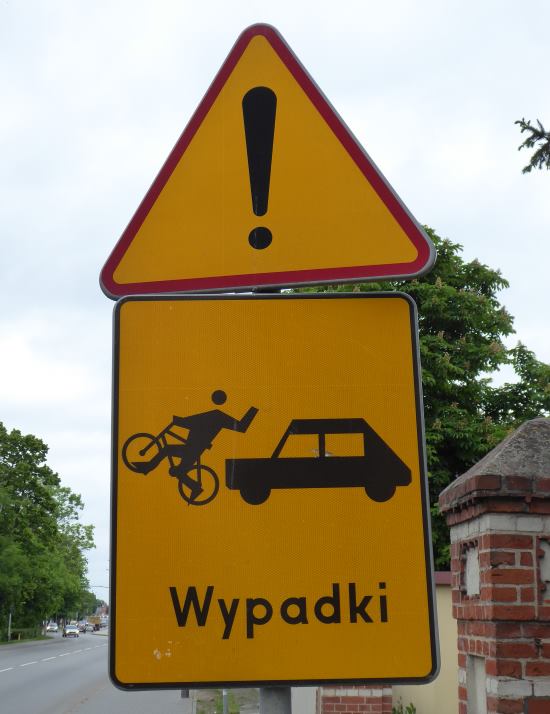 Many road signs can be puzzling too, unless you know a little of the language.

Wypadki is Polish for ‘do not attempt to give motorists the V-sign while doing a wheelie’.*

Gdańsk prides itself as Poland’s ‘cycling capital’, with good reason. For the last half of the day – over four leisurely hours, including refreshment stops, and about 35km from Pruszcz to Gdynia via Gdańsk and Sopot – I was entirely on good quality segregated cycleways: not single metre on road. 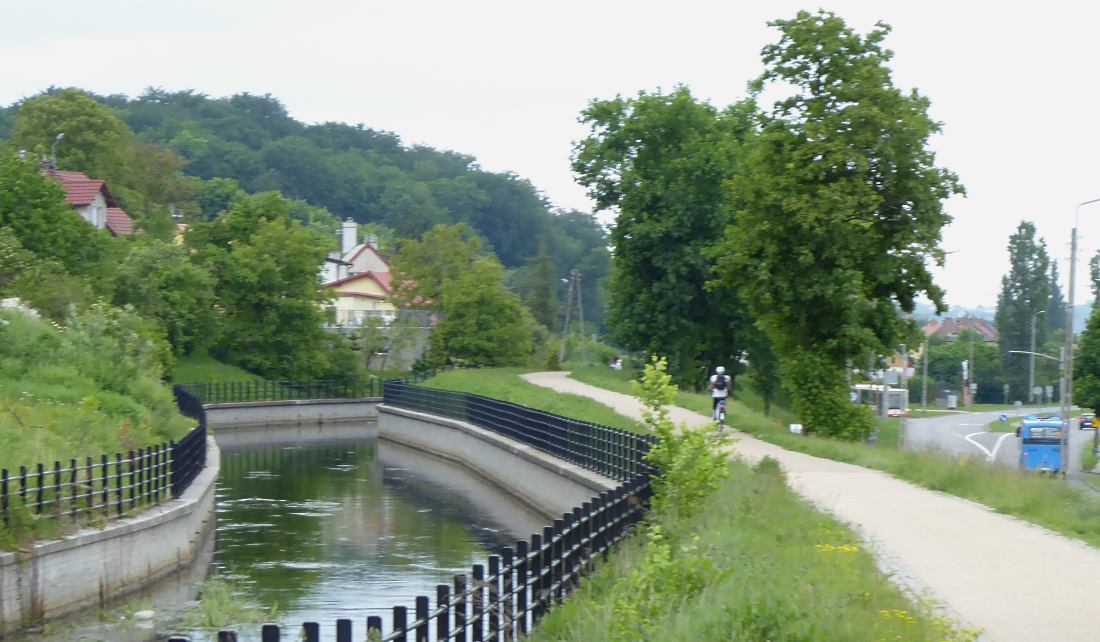 From Pruszcz I was on this canal towpath (pic). I didn’t even know Poland had canals, never mind towpaths, but it does. Those high concrete sides and fencing don’t make the waterway especially picturesque, but it prevents people fishing, which makes cycling a lot more pleasant… 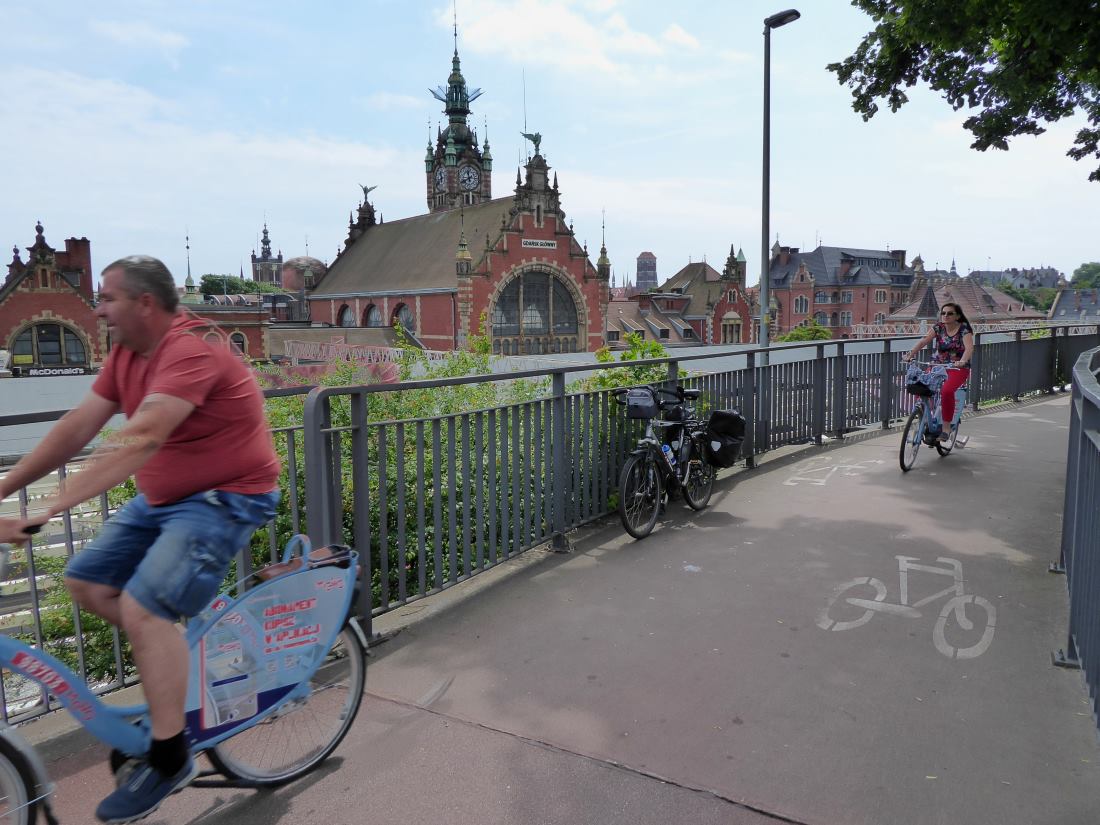 The path took me right through central Gdańsk, past the main station (pic). I’ve visited before, and I’ll be spending a couple of days here next week, so I didn’t need to stop and ‘sightsee’ (ie from the table of a pavement bar). 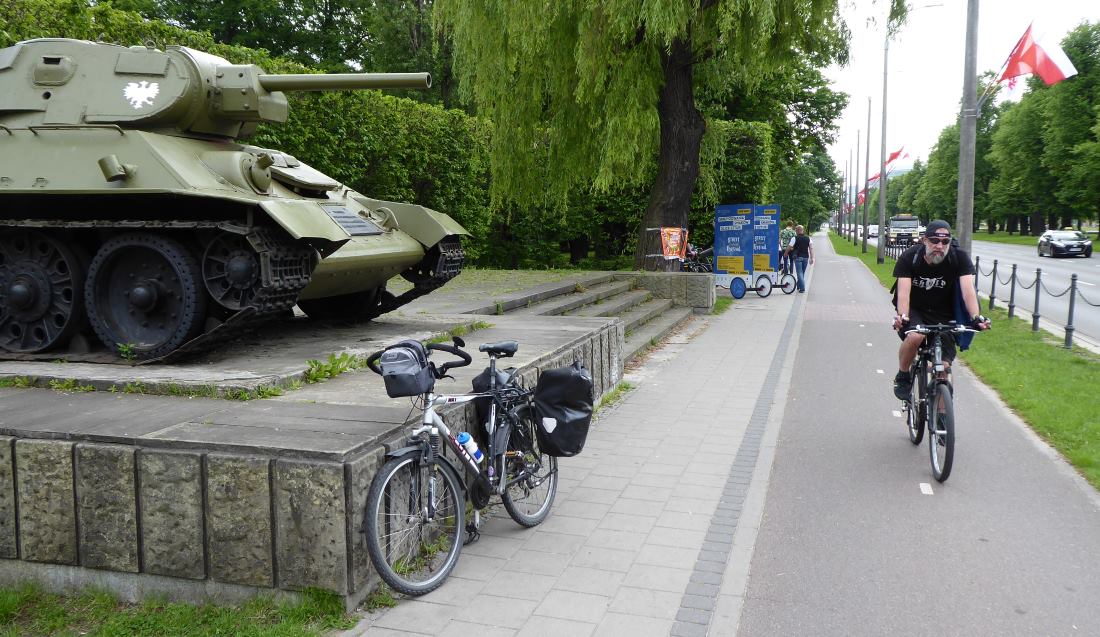 At one point the cycleway passed this tank monument (pic), with my bike leaning against it. Weighing nearly 40 tons, with a maximum speed of 5mph, based on old-fashioned but reliable technology, difficult to manoeuvre, but virtually indestructible, my bike has served me well on this trip. 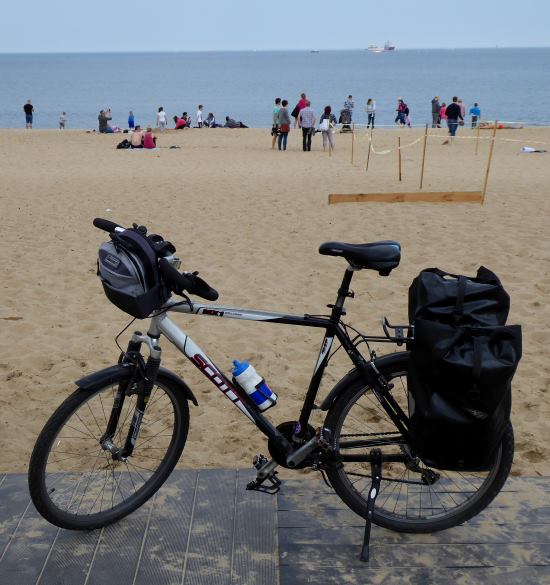 And so to the sea: my first glimpse of salt water since Montenegro, never mind since starting at the Polish border high in the Tatras two weeks ago (pic).

A long, long beach connects the shores of neighbouring Gdańsk, Sopot and Gdynia, and on this sunny Saturday there were plenty of people frolicking on the sand.

Not many swimming, though – it’s as cold as the North Sea at this time of year…

The cycleway continued, on and on parallel to the beach, and it was chock with people on bikes enjoying a weekend spin, as well as a fair few inline skaters, wheelchair users, electric scooter riders, and people on novelty hire bikes, who were going even slower than me.

At the shiny resort of Sopot I stopped for a drink. It’s a grand, slightly artificial-feeling place with a very long pier, but it’s agreeable enough, and today was crowded with tourists. The expansive main square (pic) is dominated by the Grand Hotel, notorious as the place Hitler was staying when he started World War II in 1939. Wonder what he wrote in the visitor’s book. 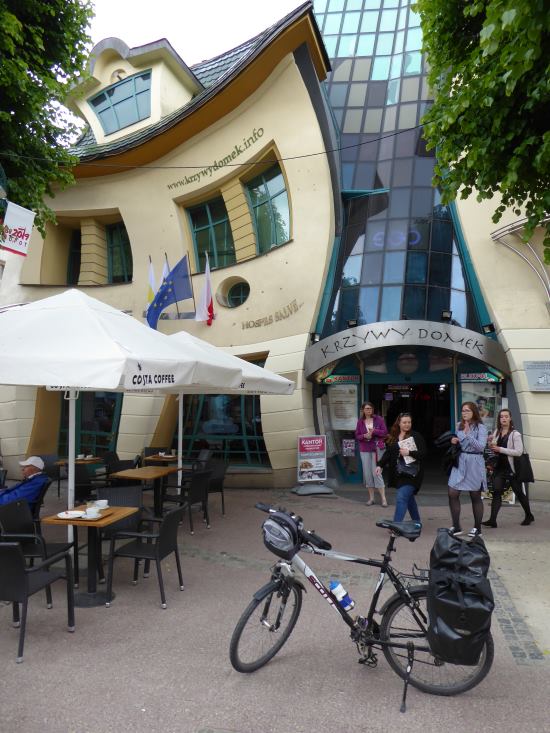 I couldn’t resist a snap of the Krzywy Domek, ‘Crooked House’ (pic). See what I mean about Sopot? Fun, but a bit contrived. We have lots of genuinely crooked houses in England. As anyone who’s seen my annexe knows.

Anyway, I’m in my very pleasant hostel in Gdynia – a modern and vibrant, but to me slightly bland, city that somehow has got itself on the cruise-ship circuit.

Tomorrow is scheduled to be the last day, when I finally get to the northernmost point in Poland. Meanwhile, apparently there’s a football match on telly tonight…

Listen to my piece for classical guitar, written in 2019 in the style of an imaginary old Polish song. It was inspired by the memories of this day’s ride. (MP3, 3min 20sec).