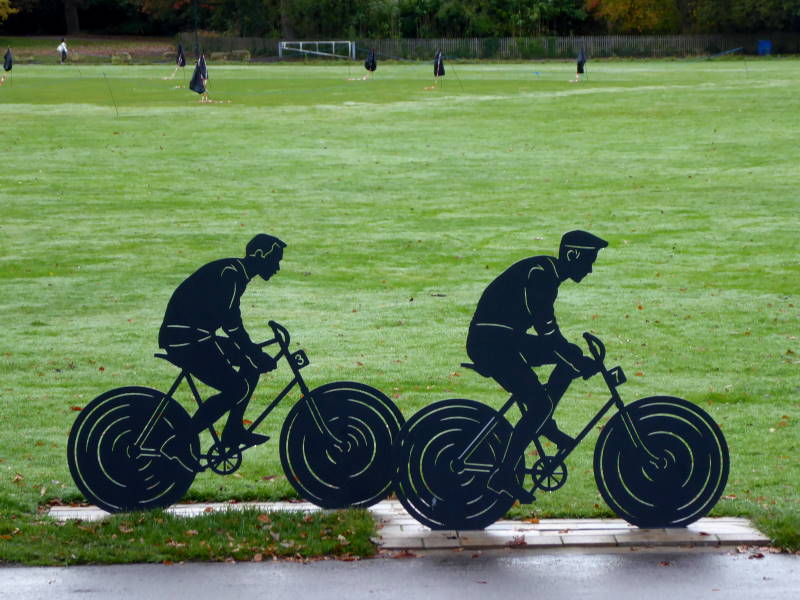 Yesterday was east; today was west, through Poole to the Isle of Purbeck via chain ferry, then back to Bournemouth via that endless seafront path.

After the cycle path which runs north through parkland alongside the Bourne I took roads to neighbouring Poole. I came here in 2010 as the first of my Rhyming Coast to Coasts, but had time to admire more of the town today.

There’s a lot of waterside stuff to admire, too, with plenty of cyclable parkland and harbourfront paths, but I was also intrigued to come upon the Poole Park Cycle Track. Once a 550m racetrack, it’s now a tarmac loop on which you can go round and round in circles and not really get anywhere, a feeling cycle-campaigners know all too well.

Figures of two Victorian cyclists commemorate the circuit’s sporty past, and it’s interesting to see how little bicycles have changed since then – or moustaches.

Poole is one of the world’s largest natural harbours, so perhaps it’s just as well there aren’t cycle paths around its entire shoreline; I’d still be riding it. I headed south along the east side, anyway, to the spit of land at Sandbanks to catch the chain ferry over to the Isle of Purbeck. I enjoyed the view, but perhaps the best view is from the upper deck of the yellow No 50 bus that uses the crossing.

It was a bit too early to have a pint at the Bankes Inn in thatchy, echt-Dorset Studland, despite the temptation of a splendid view from its beer garden, and I had a coach home to catch.

So I retraced my steps to the ferry, and back on the ‘mainland’ (though the Isle of Purbeck isn’t an island at all, just a peninsula) ambled four miles up the seafront path back to the centre of Bournemouth.

The Dorset coast is known for ‘chines’ – short, narrow ravines that slice through the cliffs to the sea. Some of them you can cycle up, the longest being Middle Chine. Which I did, enjoying the cool, rich autumnal feel. Feeling cool or rich are not common experiences for me.

It was time to fold up my bike and get the coach back home. I’ve had a lovely break, and enjoyed not having to do any work, just riding round and chilling out. Unless you’re from HMRC, in which case it was a hard-working work break for work, and totally claimable against expenses.