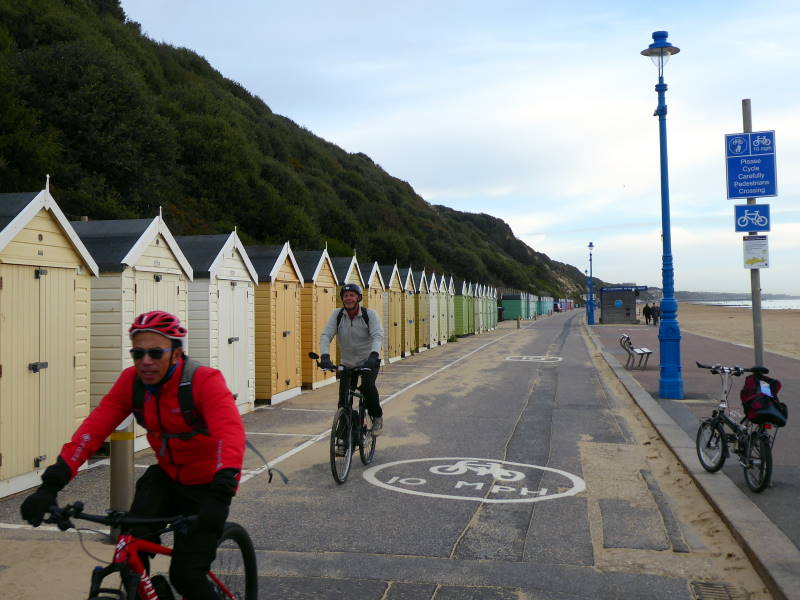 The town boomed as a seaside resort in the 19th century, and as one source informed me, has a Victorian gentility still.

So long as they use their Victorian gentility still to make whisky and not pesky artisan gin, that’s fine by me.

‘The Coast with the Most’ is the boast of the host, and after a pleasant day trundling past cafes alongside custard-yellow beaches, it’s hard to disagree.

Even a chaotic wrong-note rendering of I do like to be beside the seaside – stand by for that later in this post – couldn’t detract from a splendid day.

I got here by cheap overnight coach, enabled by my Dahon Speed TR folding tourer. Today’s plan was simple: cycle east on the prom path five miles to Hengistbury Head and back. Simple plans are often the best. At least they’re easy to remember.

Bournemouth’s prom cycle path isn’t quite as simple as Blackpool’s, though. There are a number of caveats and riders, more riders even than I saw today. The seafront is out of bounds to bikes from 10am to 6pm in July and August; however, the section between Bournemouth and Boscombe piers is cyclable all year; but, it also carries light traffic for beach huts and such; nevertheless, they move slowly, etc…

Outside those times though it’s a cracker of a seaside ride. Cafes – and, more important for me, toilets – are frequent. The path is mostly very wide and smooth. Beach huts run the length of the prom; despite being badly insulated, cramped and without basic amenities, they command huge prices thanks to simple supply and demand… like English housing stock generally.

You can hire bikes easily, either from a kiosk just east of Bournemouth Pier, or via the local Beryl Bikes scheme: download an app, pay £1 unlock fee plus 5p per minute, and off you go.

(There’s also e-bikes for £1.50 plus 10p/min, and various bundles and pass schemes for cheaper deals.)

For those of us used to urban bike-schemes such as London’s, it’s odd to see a docking station by the beach.

On this fresh November morning there was a steady trickle of cyclists, dog walkers and joggers, plus the odd hardy greyhair in the luxury of a wetsuit (£15 for day hire) heading for the waters.

But today was good. At Hengistbury Head I treat myself to a full English breakfast at the Hungry Hiker cafe, and explored the sandy reserve. I waited patiently for the short ferry across to Christchurch before realising it would be a while until the next service: March, in fact. It had just shut for the winter, as had the funicular in the town centre, and the land train between here and the centre. (Though they don’t have a bike carriage – another argument for renationalising the railways NOW.)

But there are advantages to coming out of season, such as very cheap coach fares and ultra-low hotel prices. Chuck in a pint or two at Wetherspoon prices (there are three branches in the town centre), bring your folding bike, and you have an overnight seaside break for the cost of a meal out at home.

Or even the cost of the zipwire that whooshes you down from a tower at the end of the pier to the beach – being such a brief ride it works out at about £3,000 per hour. Not even Tory MPs moonlighting for lobby groups earn that.

Talking of Wetherspoons, one of the three in town is called the Mary Shelley. The Frankenstein author is buried in the town despite never having lived here, and the pub is named after her even though she never, as far as we know, had a breakfast deal here for £3.95 (£4.95 including a free pint).

Before my post-ride refreshment, though, I wheeled my bike along Boscombe Pier (which is free, unlike Bournemouth’s: that’s £1.30). I was delighted to see a Musical Play trail on it: a set of percussion instruments you are welcome to try using the attached mallets, though most of the mallets had been stolen.

The headline musical installation is the 88-note line of tubular bells, which played in sequence (to the right rhythm) play I do like to be beside the seaside, the anthemic 1900s music-hall favourite.

Sadly only half the mallets were available, so only 50% of the tune was playable. But the effect is engaging, and tends to turn heads, as people look round for the ice-cream van. (One mallet-rich duo have helpfully put a video of their performance on YouTube.)

But I was most intrigued by the score for the song, helpfully painted up above. Delightfully, it was full of mistakes. This is what the song should sound like, and indeed does, if you have enough mallets to play the tubes in rhythm:

What the tubular bells play

…and here’s how the score claims it should go:

What the score says

This is excruciating for proper musicians, who looking at the notes would hear the wrong-note tune in their head, all the while playing the right-note tune on the instrument itself.

Luckily, I’m not a proper musician.

So, to reveal the sort of cacophony experienced by a good sight-reader attempting to both read the score and play the tune, here’s my take on it: Duet for Tubular Bells and Incorrect Score, faithfully following the installation here, playing both versions of I do like to be beside the seaside simultaneously.

Enjoy. If that’s the word.

e2e.bike > Other > Route research > Bournemouth 1: Wide ride beside the seaside