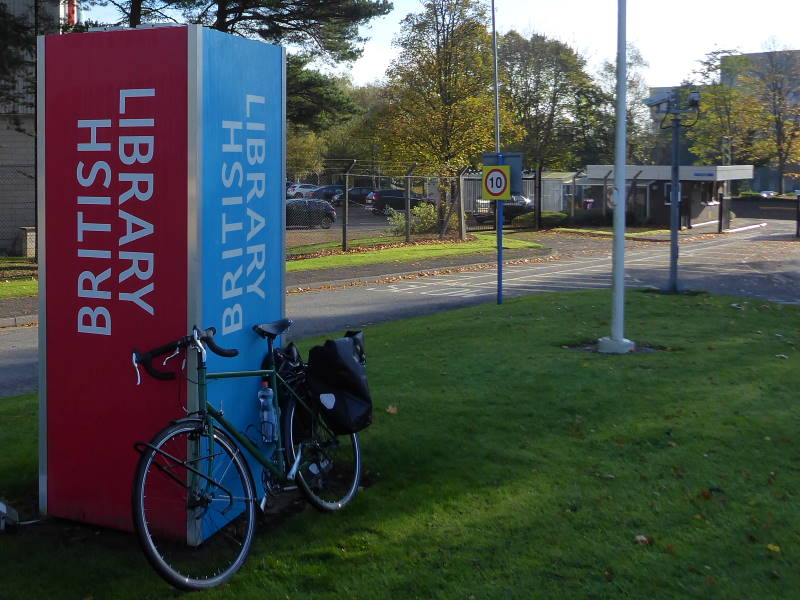 The British Library, at St Pancras in London, is nirvana for researchers. It gives free access to (in principle) every book ever published in the UK and much more besides, in spacious and comfortable reading rooms. But its Yorkshire outpost – officially in ‘Boston Spa’, but actually adrift in an industrial estate between Wetherby and Tadcaster, on an old WWII munitions site – is little known.

As one BL blogger wryly notes, “Occasionally mistaken for the nearby prison, the British Library at Boston Spa… is a landmark perhaps more driven past than actually visited.”

Its obscurity is partly down to its remoteness. The nearest train station is effectively York, 40 minutes’ taxi away, and the one daily bus (as I know from previous research visits there) arrives an hour before the library opens and departs an hour after it closes. So unless you are a fan of bus shelter architecture or taxi interior decor, public transport links are not especially convenient.

Indeed, living in York, it’s often actually been easier for me to travel down to BL St Pancras – right next door to the rail terminus at King’s Cross – for a day’s swotting. Megabus used to do £1 fares from York to London, so it was far cheaper, too.

Yet Boston Spa’s sole reading room (which offers the same access as the fancy London HQ, and also has the UK national newspaper collection covering 300 years) is even more conducive to study than its more crowded London counterparts. There’s also a very reasonable cafe-restaurant you can use, the whole site is delightfully quiet, and the staff are chirpy Yorkshire folk.

I had to renew my reader pass, but hadn’t been able to book a slot in London for any of the times I was passing through this autumn. So today I cycled to BL’s quieter Yorkshire branch to do it instead: a gentle, flat journey of 15 miles each way on a super sunny day, out via Rufforth, and back via Tadcaster.

It was an apple-crisp autumn morning, and I followed the recently improved car-free cycle route from western York to Rufforth via Harewood Whin.

At Bilton-in-Ainsty I was pleased to see that my favourite ‘Pedestrians Crossing’ sign, featuring a silhouette of John Cleese in Silly Walks mode, is still there.

A ‘Roman Road’ that looked suspiciously wiggly got me to the industrial estate that BL Boston Spa calls home. The road names are hardly suggestive of history or character: ‘Street 5’, ‘Avenue B’ and so on. But the Library is a little oasis of smiling, scholarly good cheer.

My reader pass duly renewed with an unflattering new prime-suspect mugshot, I cycled over the Wharfe on a bridge recently renovated as a bike path. It was once the Wetherby-Tadcaster railway line, but was the first casualty of the Beeching purges.

Tadcaster is known as a beer town, and I’ve blogged about it before, but it was too early to be thinking about a pint. So, stopping briefly to admire the viaduct to nowhere, I carried on along the A64 bike path – a noisy and humdrum journey but a fast way to get back home, especially with a friendly tailwind.

There are plans to make BL’s Yorkshire outpost more accessible and visitable, with talk of a centre in Leeds – a welcome move away from Britain’s notorious London-centricity.

It’s unlikely that Yorkshire ever will be a distinct country. But if it was, it’s nice to know we already have our national library in place.

We’d even be prepared to share our resources with that foreign equivalent down in London. We wouldn’t deny researchers in the capital access to the world’s knowledge. What with unaffordable houses, two-hour commutes, no scenery, and £6 pints, they suffer enough.