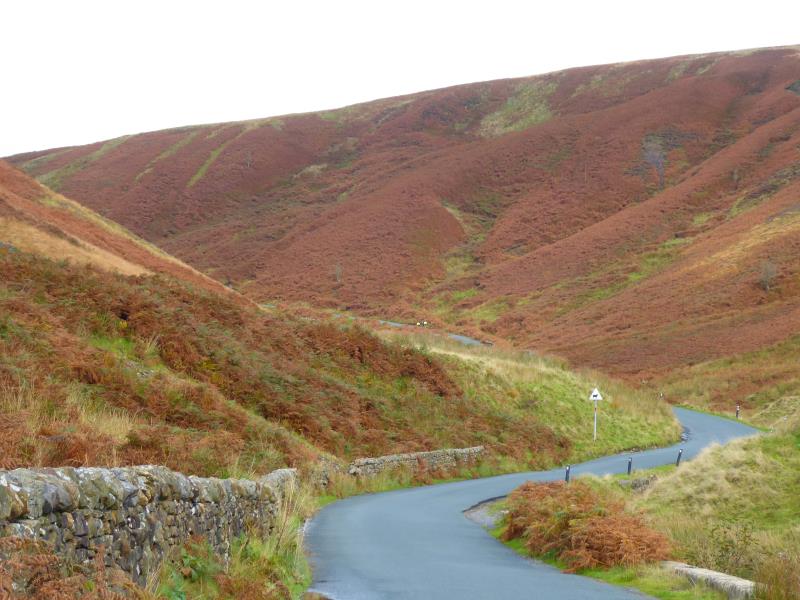 Dunsop Bridge is the centre of Britain: the point at which a cardboard cutout of the country would balance. Not, obviously, a full-size one. Thanks to everybody ordering everything off Amazon these days, there isn’t enough cardboard as it is.

And my route today – a forty-odd-mile loop northwest from Clitheroe up the splendid Trough of Bowland – took me right through this extreme-centrist village. A beautiful route, too, with wide open views everywhere, a pleasant mix of rolling farmland, rugged hills, ginger-coloured moors and broad plains.

Dunsop Bridge’s centrality was determined by the Ordnance Survey, who place the precise zero-zero origin at Whitendale Farm a couple of miles north up a tarmac bridleway that I cycled a couple of years ago.

But DB is the nearest inhabited, visitable place, just large enough to boast a very good cafe, the Puddle Duck, and a phone box with a rare claim to fame – thanks to scanty mobile signal round this remote area it still has a working phone in it, not a defibrillator or miniature library or bed of nettles.

DB is now in Lancashire, but used to be right at the western extremity of traditional Yorkshire. The road that rises northwest out of it certainly has a borderlands feel. It winds through the extravagant Trough of Bowland, a tarmac gash through the rust-coloured hills, steadily plied by cyclists all riding faster than me.

I followed wild, sparse and barely-trafficked lanes on the other side to wind west and then back south and ultimately east back towards Clitheroe. Good ridge views, especially over the flat coastal plains to my right, with Blackpool Tower standing out on the horizon as if ready for launch.

With my cycling routes done, I could look forward to a few days staying with friends outside Chorley. They’re cyclists too, and we had some research to do into nutrition. Of the sort involving black pudding and single malts.