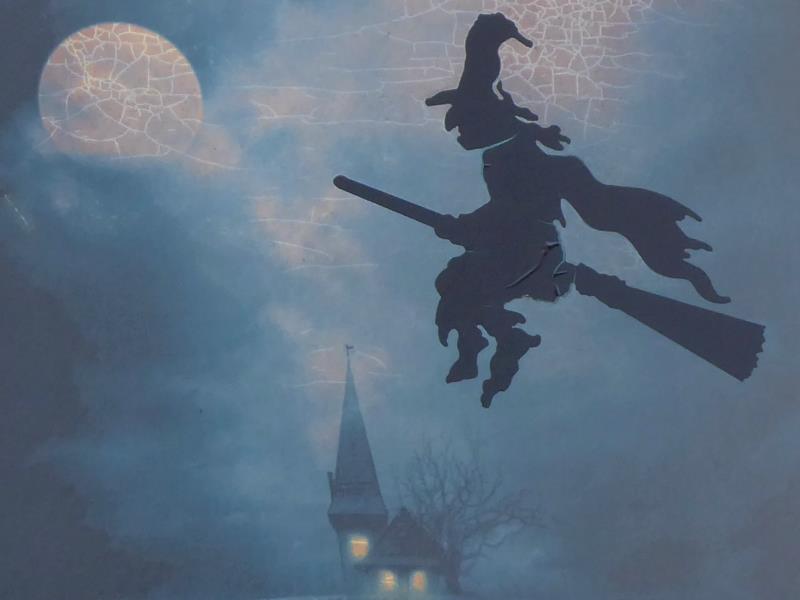 Today’s plan was a ride in diabolical territory – up through the Nick of Pendle to witch country – and the morning was certainly diabolical weather, with black clouds and furious rain. I sat most of it out by doing cafe and bike shop research (talking of which, the Green Jersey local bike shop–club–cafe is a cracker.)

As usual I wasn’t travelling light. I had panniers full of stuff and a stomach full of English breakfast. With squelching trainers, I crawled up the Nick of Pendle as the drizzle eased off at last, past Pendle Ski Club. Yes, it’s a bit middle-class round these parts, you know.

The Nick itself offers commanding views in both directions. All today’s ride was very easy on the eye, thanks to the open, friendly landscape, like the people, with their inclusive Lancashire good humour. Though the people are a fair bit warmer than it was today.

After a fair bit of upping and downing I pass the Witch Shop in Newchurch, where you can buy all sorts of broomstick-, cauldron- and hat-related souvenirs. Because this is Pendle Witch Country, notorious for the trials in summer 1612, when a dozen or so women were executed for murder and witchcraft.

It seems being a witch at the time could be a lucrative career choice for village women, who were more like healers and herbalists than demon-raisers, or besom-toting aeronauts. Boastful talk of deals with the devil were part of their advertising shtick.

However, in the feverish and superstitious atmosphere of the early 17th century, exacerbated by family feuds and anti-Catholic hysteria, a lot of people wanted heads to roll. Literally. After a tinker died, or perhaps just limped a bit, having supposedly being cursed by one of the women, the Pendle Witch Trials took off like an e-broom.

The dramatic landscape certainly goes with the dramatic story, and in the village of Barley I was pleased to see witchy images on the pub sign and, fetchingly, on the car workshop. I haven’t had a car in twenty years, but when I did, I remember charges appearing on my MOT list by magic out of nowhere.

BROOM WITH A VIEW

There’s an official witch trail here. It runs 45 miles from Barrowford to Lancaster, with ten marker posts along the way commemorating some of the witch-hunt victims. The best photo-opp (which I missed) is a statue in Roughlee village. The pedalling poet Caroline Burrows cycled the trail and wrote it up for Adventure Cycling magazine.

More lovely ridgetop riding on quiet lanes led me to Downham, a handsome village with one of Clitheroe’s many upscale gastropubs. No, of course I didn’t. I ate in Wetherspoon’s in Blackburn.

But before that, I had one bit of fun. I hopped off the train at Langho (rhymes with ‘mango’, where there is another very upmarket place to eat, the Michelin-starred Northcote) and cycled up the steep hill to the village of… York.

Yes: York, Lancashire. It’s a tiny place with sweeping views down over the valley and up to Pendle Hill to the north. It has a pub – 364 less than its namesake, but not bad for a cluster of a few dozen houses. I celebrated with a pint of local real ale, Bowland Brewery’s Hen Harrier.

The other thing in York, apart from the pub, is a curious pair of gingerbread-person-like figures on a hilltop. (I can’t find any explanation for them online.) On a clear day, they say, you can see Blackpool Tower. I didn’t see that, but I did see a couple of donkeys, who followed me hopefully, perhaps thinking I might have some carrots. I didn’t. Because I was going to eat in Wetherspoon’s in Blackburn.

The landlord of said pub, the Lord Nelson, cheerily informed me that yes, sure enough, they get a few tourists every year who rock up there wondering where the Minster and the city walls are. Google Maps has a lot to answer for, he said with a smile.

It was tempting to have another pint and something to eat, but I hurtled back down the hill to Langho station for my train. By now you’ll have gathered where I was heading for dinner.