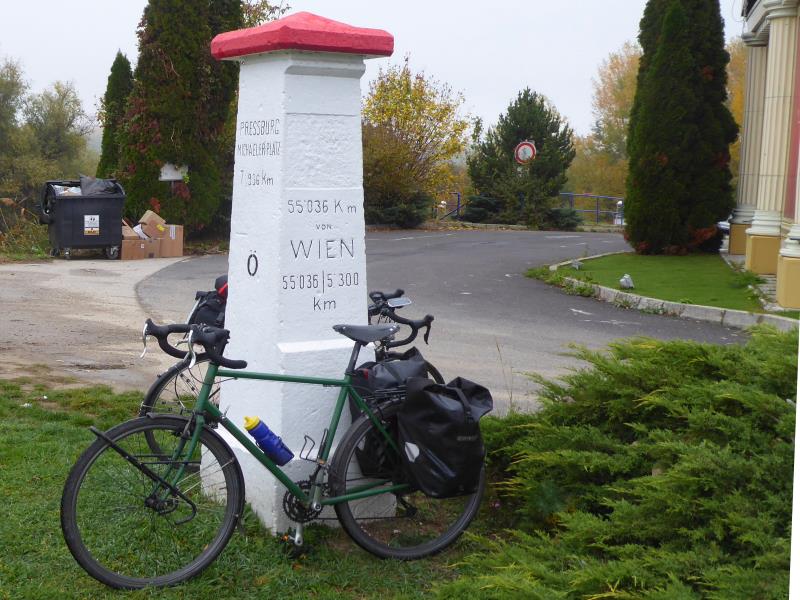 If this Austrian End to End started with Bangs, it ended with – well, not exactly whimpers, but maybe a shrug and a meh. The last few foggy, drearily uneventful floodbank-top miles of Danube Path were like Philip Glass played on a hurdy-gurdy. For five hours. Except that I rather enjoyed the quiet solitude of the cycling.

Even in Vienna nothing much was happening, thanks to it being National Day and most places being shut. (Not McDonald’s, though.)

We passed through no villages or towns until Hainburg, near the border. It was mostly shut – no chance of a snack – but I got a machine coffee from a back-room shop, but it tasted more like tea.

There was one final settlement before the border, and the end of our End to End: Wolfsthal, which looked shopless and closed, except for a vending machine that engagingly offered fags and beer as well as confectionery and potato-based snack foods.

A couple of miles of mist along a roadside path later, and there we were, at the old border post with Slovakia just outside Bratislava. This was the End to End completed, at the old border and customs buildings, now abandoned and scruffy apart from a dingy-looking bar and casino, both shut.

And that was it. Getting on for six hundred miles in 11 days and one rest day; no mechanicals, no punctures, no disasters. Plenty of beers, many pastries, glorious alpine scenery and mostly superb weather. From here the Slovakian capital was only a handful of drizzly kilometres away; we headed to our hotel there for a couple of days’ post-project winding-down.

Austria makes for an outstanding End to End: almost all on flat, smooth, wide, car-free cycle paths in quite outstanding scenery. It’s not the cheapest place, but no more so than Britain. And it’s not hard to guess which is the less stressful, and more beautiful, place to ride. Highly recommended. Enjoy.