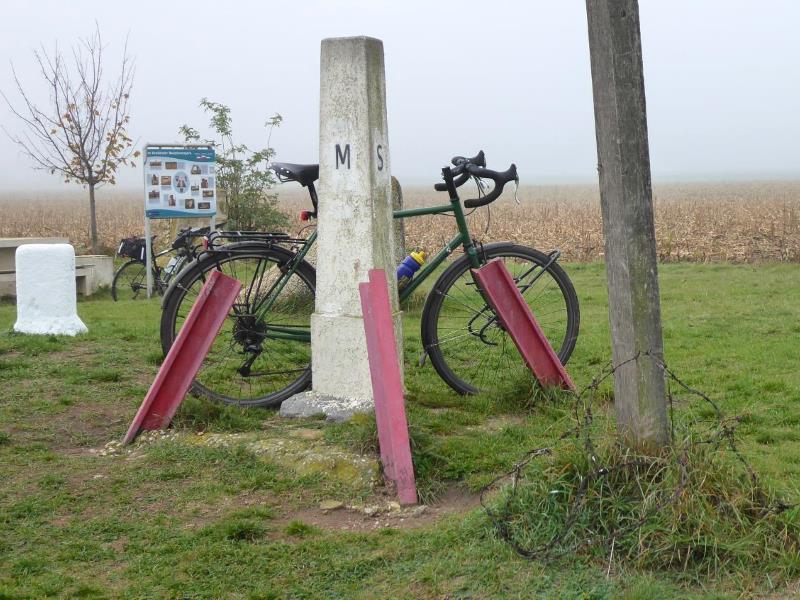 Europe is strewn with points where three countries meet, so they’re not that special. (There are no genuine four-country points in the world, by the way.) But, being in Bratislava after finishing our Austrian End to End, we couldn’t resist cycling through the fog today to the junction of Slovakia, Hungary and Austria.

A dozen or so level misty miles on back lanes and paths took us to the tripoint, just off a main road along a farmland track. It’s marked with a collection of sculptures and a few information boards. On a clear day, you can see three countries from here. Well, today the visibility was about five metres, and you could still see three countries.

The marker post itself has an ancient tangle of rusty barbed wire still attached, presumably a reminder of those dreadful Iron Curtain times when you could be shot for illicitly traversing a border. Or more probably interrogated pointlessly for hours by some gloomy guards who wished they were back home eating mum’s pies.

Snaps duly snapped, we cycled back towards Slovakia’s bars via more excellent flat smooth Austrian cycle paths. I was keen to explore the Bratislava suburb of Petržalka (from the word for ‘parsley’: I couldn’t help but think of early 1970s BBC children’s programmes).

The area is known for its forest of postwar residential tower blocks. In fifty shades of grey in Soviet times, they have now been brightened up by inventive paint jobs, and I found the effect rather pleasing.

We were also brightened up once we found Petržalska Klubovna, a hip and trendy brewpub. I had their IPA and a schnitzel the size of a hand towel. I found their effect rather pleasing, too.