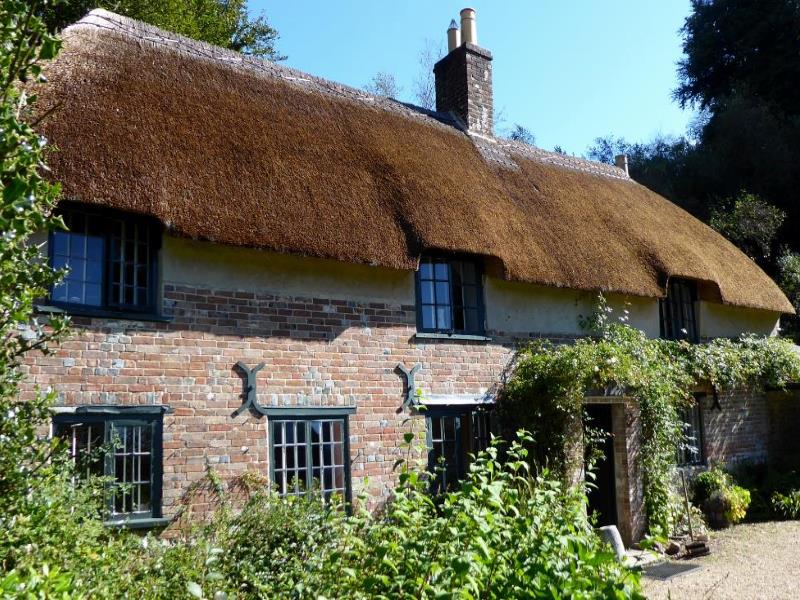 In Thomas Hardy’s novels, Dorset is a miserable, oppressive backwater – something tourism marketing glosses over. But I enjoyed cycling round a few sights that the gloomy old scribbler would have recognised today, and it wasn’t miserable or oppressive at all. Except for Poundbury, maybe.

Weymouth’s prom looked inviting in the morning sun, especially as it was early enough to cycle it. (There’s no biking from 10am to 5.30pm from Good Friday to 31 Oct.) But it was too cold for a day on the beach. I didn’t want to freeze my bananas. I was after something more rural; more, well, Dorsety.

I got the train to Chetnole, a remote unstaffed halt, whose single platform is so short I had to manoeuvre my bike through the train aisles to the front door to be let out. A few moist bridleways took me to Evershot, praised by my guidebook as one of the county’s prettiest villages.

I’m not sure I agree – I couldn’t find a postcard view of it, never mind any postcards. But I’m sure Hardy would have recognised the Acorn pub, which he wrote into Tess of the d’Urbervilles as the ’Sow and Acorn’. (Tess avoided breakfast there; in her honour, so did I, getting a sausage roll from the nearby bakery instead. I hope I don’t emulate her too much: typically for Hardy characters she came to a terrible end, executed.)

From nearby Rampisham I took NCN26, along a few bridleways and farm tracks, to Dorchester. Hardy was born just outside, in Higher Bockhampton, so I couldn’t resist cycling out to his birthplace. It tends to be described as a ‘simple cottage’, but looks fairly large and well-to-do if you ask me.

Perhaps people think writers inevitably come from humble beginnings before the world recognises their talent and they become fabulously wealthy from unlimited royalties. In my experience this does not necessarily reflect reality. You’ve probably met several writers, but were unaware of the fact, as you took delivery of your Just Eat takeaway.

Anyway, Dorchester also has a fine example of a Roman Town House, which I nosed around, admiring their advanced notions of civilised life such as underfloor heating, floor mosaics, and wine for breakfast.

I also stopped off at the Hardy statue. Tom does not, it has to be said, come across as a cheery soul, what with all his characters leading wretched and futile existences, and like Tess, dying awfully. A sort of 19th-century Morrissey, only for novels. His statue doesn’t make him look like a cheery soul, anyway. The car drivers queuing at the roadworks alongside by the empty petrol station didn’t look happy either.

Heading out west I went through Poundbury, a model community designed along Georgian architectural lines under Prince Charles’s stewardship that shows all the good taste and intelligence you’d expect from a hereditary royal. In other words, not much. I really don’t like it: to me it feels contrived, car-centric, soulless and jumbled, a superficial film-set of a place.

A steady climb got me to the Hardy Memorial. But this isn’t Thomas, or indeed Jeremy, or GH, or Oliver, or Francoise. It’s Admiral, of Kiss me, Hardy fame. It put me in mind of Morrison’s chmney in York, only made out of Portland Stone, and without the benefit of an adjoining supermarket.

It commands a superb panorama from its position on the top of Black Down, which sounds a safer option than Black Up, and I spent a happy half hour marvelling at the views down to Portland and Chesil Beach and just wandering round. Carefully: it was very windy indeed and there were lots of steep ledges. I didn’t want the melodramatic sort of demise the other Hardy vengefully thrust on some of his characters.

Miraculously I survived, and had a quick look round Abbotsbury nearby – a welcome piece of thatched, cottagey Dorset authenticity after the ersatz Poundbury – and scooted with a strong tailwind back to my accomm in Portland, enjoying a promenade pint at the Cove House Inn.

e2e.bike > Other > Route research > Dorchester 1: Hardy country. But which Hardy?