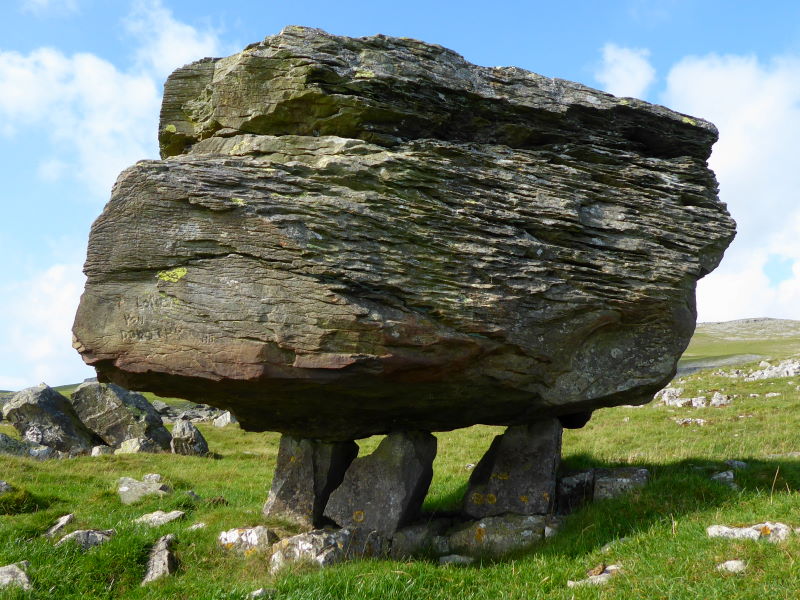 The sandstone blocks are ‘erratics’: intruders, deposited by glaciers long long ago, before the internet, before mobile phones.

And, of course, they’re best visited by bike. You can’t cycle right up to them – a shortish walk is involved – but you have no parking problems on the narrow lanes that twist up to them.

I took the train to Clapham – the village in Yorkshire, obviously, not the railway jungle in London – and biked east then north to Austwick, enjoying vast ridgetop views north to the Dales.

From there a lane heads up into the limestone hills, and with bike discreetly locked to a fencepost, I could stroll up to see the erratics themselves, on a plateau with sweeping vistas.

The sandstone rocks, ferried in on ice about 12,000 years ago, strew the plateau. One toothy ridge reminded me of the Dolomites…

…though it looks less alpine when viewed in context. Still, it made me wish I’d brought some Lego cycling models to do a faux-mountain-pass photoshoot.

So, to the main attractions. Wander round amid the boulderscape, spooking the odd sheep as you go, and you’ll come across several splendid examples of nature-art.

The sandstone (dark, green lichen) is harder than the limestone underneath (light, white lichen). Over the millennia, wind and rain eat away at the supporting softer rock, but the very central parts are sheltered by the hulk above.

The result is a mighty range of works that put you in mind of all those great West Yorkshire monumentalists. (Henry Moore was a cyclist, but I get the idea Barbara Hepworth preferred driving.)

I spent a happy hour poking round this raw, unfiltered version of a Yorkshire Sculpture Park, before returning to my bike and doing a loop up Crummack Dale and back down to Clapham.

This involved some off-piste bridleway. Considering the Scott is my shopping bike, it coped pretty well.

I got up to a cairn where I could join the Pennine Bridleway, which immediately had me making plans for more off-road tours in the Yorkshire Dales, definitely not involving the Pennine Bridleway. It was a bit too rough for a bike that’s more used to gliding around Aldi’s car park.

I came into Clapham by the atmospheric tunnels that burrow underneath Ingleborough Hall. This route – part of the Pennine Bridleway, and a Sustrans route – is one to be savoured at leisure. You certainly can’t cycle it. It’s a boulder field.

At Clapham’s lovely limestone village, threaded alongside the brook, I enjoyed some more Yorkshire masterpieces: I relaxed with a pint of refreshing Settle Brewery IPA at the New Inn, before cycling back to the station and heading home.