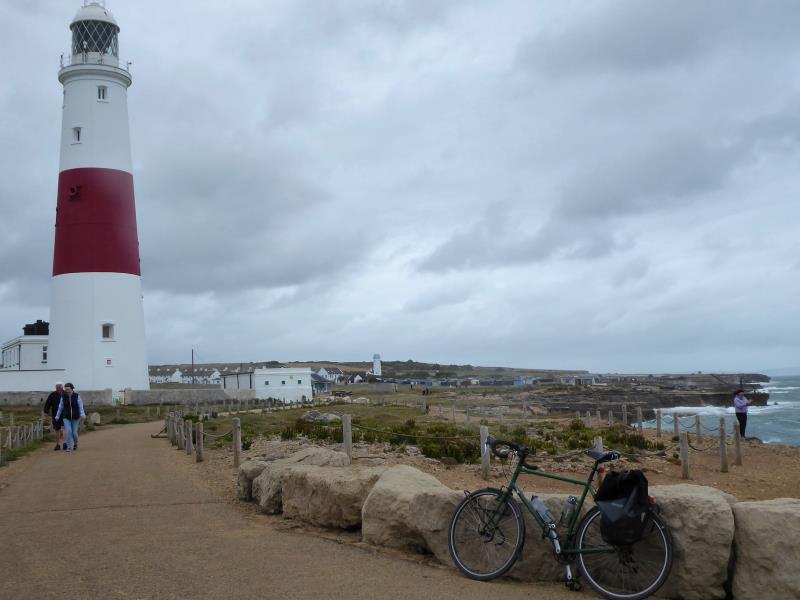 With rain and very strong winds forecast for today, I scaled down my plans for an eighty-mile research ride to, er, eight miles. Instead of heading out to the Jurassic Coast out Lyme Regis way, I’d stay on Portland itself, hopping down to the Bill: the southernmost point of the entire south coast, except for, er, all of Devon and Cornwall.

Porland is sometimes dubbed the ’Gibraltar of Wessex’; half-close your eyes and it looks strikingly similar, a rocky island tenuously linked to the mainland by narrow sandy flats. But no ’apes’ here, of course, and the beer’s much better. I cycled up the steep hill to the top of the island, where there’s a cafe (closed) Tourist Information kiosk (closed) bar (closed) and restaurant (closed).

There’s also an ancient monument that commemorates a time when Britain was an international power, confident and collaborative on the world stage: the Olympic Rings from 2012, when Weymouth hosted the sailing events. There’s a commanding view from here down to Chesil Beach and the harbour waters busy with kitesurfers and other wetsuit wearers.

I had a nose round the adjacent Tout Quarry, with its half-hearted and rather missable (in all senses) ’sculpture park’ (I couldn’t find the Antony Gormley, but it looks a bit of an early hamfisted effort anyway from what I can see online).

So, the Bill, please. As so often, it proved bigger than I expected. I followed the road through fringe-feeling settlements down to the tip, which had an almost Hebridean edge-of-the-world look to it.

I enjoyed the gusty extremity of it all: obelisk, lighthouse, old lighthouse now repurposed as birding spot, and not-yet-open pub (just as well: heavy rain could have persuaded me to stay there all afternoon).

I pedalled back to the north of the island to find a cafe for lunch, but only found the Cove House Inn again. Reluctantly, I treat myself to a burger and chips and two more pints of Jurassic, at a window seat inside this time, watching the timeless waves crash furiously against the beige concrete prom outside.