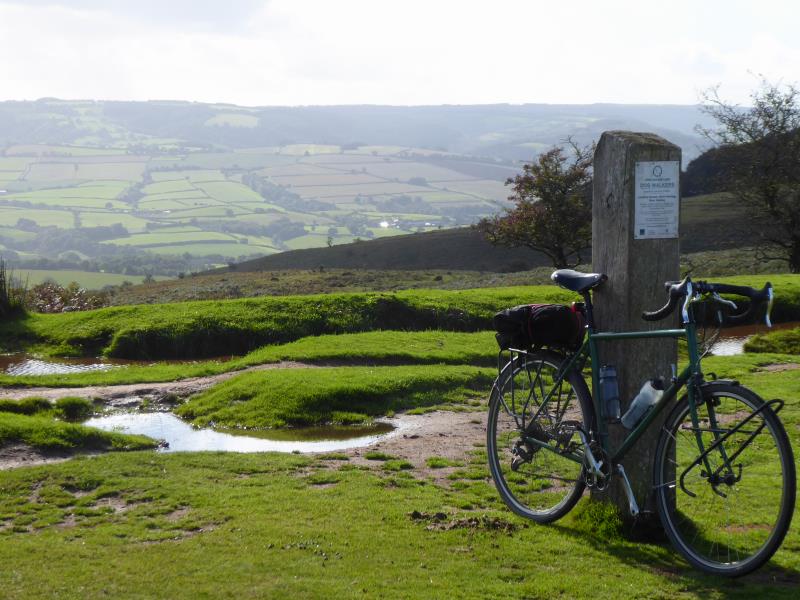 I lived in Bath for 13 riotous years, so there’s place in my heart for Somerset; probably a furred-up aorta. Unheralded Bridgwater entices cyclists with easy access to the Mendips, Quantocks, Levels, and even the Solar System, as a scale model strung along the canal towpath to more heralded Taunton.

No planets today though. I was trying out a shortish gravel route west from town and up into the Quantocks, a compact AONB of heathland, moorland, woodland and parkland, known for its superb views. I wasn’t disappointed. I was very appointed, in fact.

A long gradual climb up quiet lanes west of Bridgwater got me to the Qs themselves. The lanes ran out and turned into good bridleways, then not so good bridleways, a right old mix of fine gravel, rocky tracks, smooth packed earth, tree roots and muddy paths. But it was all gravel-bikeable, or at least steel-touring-bikeable, on my trusty Spa Cycles Tourer.

It was gloriously sunny: a super autumn day. The views were fantastic and got even better as I headed northwest, past Black Knap, Triscombe Stone, Hurley Beacon and Bicknoller Post: magnificent natural showpieces such as the North Somerset coast, Welsh hills, the broad Severn, the purple moortops, and Hinkley Point C.

I turned west down a long bridleway called the Great Road, which was neither great nor a road: it was a rather rubbish rock-strewn challenge that got more and more trenchlike as it went on. The last mile into Holford was a tedious push. But the rest of the ride had easily made up for it.

From Holford I took some lovely, quiet back lanes to Bridgwater via Nether Stowey and Spaxton, though Butcombe was probably top of my enjoyment list today. Not a village or a combe, but a pint of cask ale, in the West India pub near my accomm.