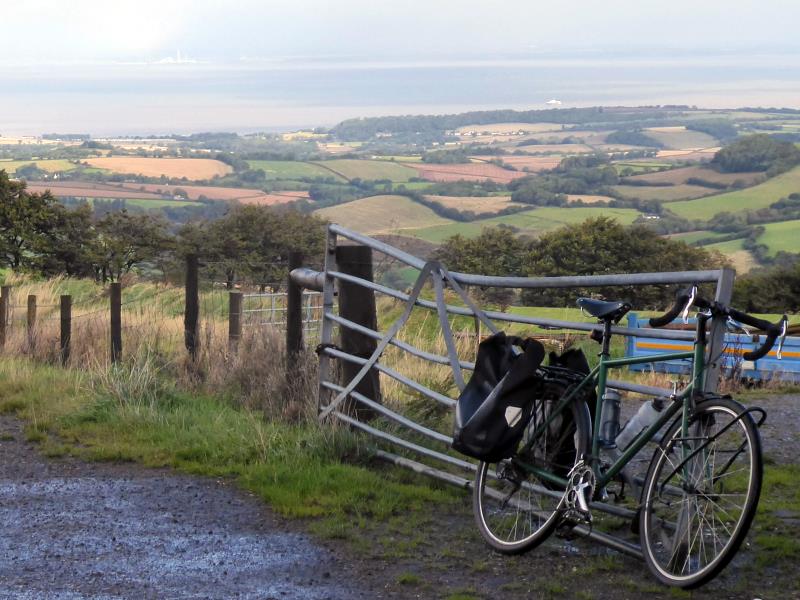 Today’s forecast suggested rain at 11am and 3pm; cloudy and dry in between. Spot-on, if you deleted the words ‘cloudy’ and ‘dry’. I got rather wet and spent a lot of time sheltering downpours under trees or in village hall awnings, but it was a very satisfying day of cycling the hills, combes and coast west of Bridgwater.

I ground my way up the southerner of the two roads that cut east-west through the Quantocks. Not many views thanks to the thick woods, and no glorious downhill freewheel on the west flanks of said Qs because of a rocky surface that I had to walk my bike down.

Very quiet lanes took me through villages such as Brompton Ralph, where I had a snack in a rare burst of sunshine by the church with fine views back down to the plains I had climbed up from.

A skim west along the B3224 and down a back lane to Kingsbridge – interrupted by one of many sheltering from rain under tree episodes – was the cue for a magnificently long, ten-mile downhill on an untrafficked streamside lane all the way down to Watchet.

I’d only known of Watchet from an imaginary conversation-joke (–Where are you from? –– Watchet. –No need to be so defensive, I was only making conversation.) In fact it’s a pleasant and historic little harbour town, on the West Somerset heritage railway indeed (as the wheeps of today’s steam special confirmed, on Britain’s longest of the genre).

Watchet is also the home of the Ancient Mariner, as in Samuel Taylor Coleridge’s famous poem. I was put in mind of the joke about the inept goalkeeper nicknamed the Ancient Mariner, because he stoppeth one of three. But I never knew the verse was inspired right here: evidently in 1797 Coleridge walked here over the Quantocks from his home in Nether Stowey, and thought up all that stuff about albatrosses and ghosts and death and things.

(The wedding guest he buttonholes, having sat through the mariner’s long story, ends up a ‘sadder and wiser man’, something I’m familiar with from my many route-research cycle-rides.)

Watchet is also the home of a much-stalled Sunday market on the first of each month, and it was rather jolly I must say: I treat myself to a bacon and egg roll from one of the stallholders and enjoyed the musical entertainment from another.

After that it was more rain and a long slog up the 1 in 4 climb over the Quantocks east out of Crowcombe up to the wide heathery, moorsy top, followed by the swoop eastwards down the other side, eventually back to my accomm in Bridgwater.

Rain notwithstanding, it had been a good day and I was happy: a tribute to my positive altitude.