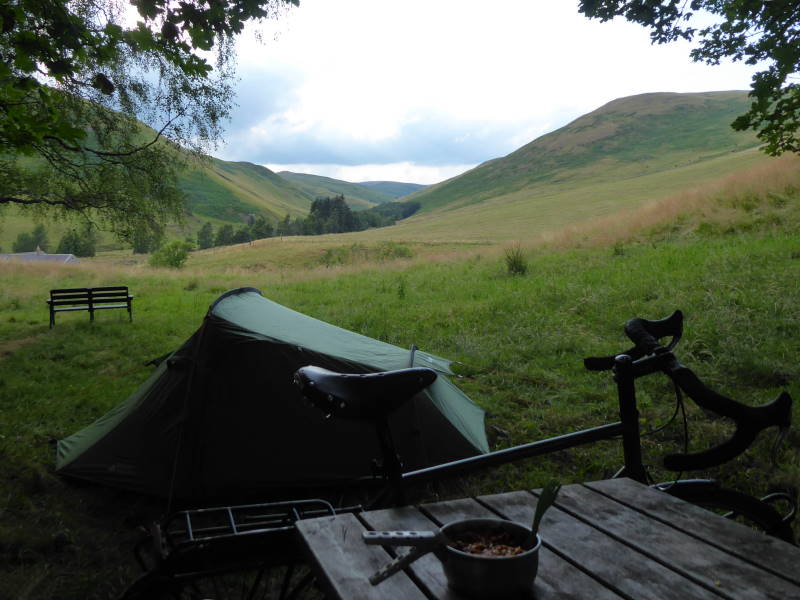 This is as remote as England gets. The top of Coquetdale in Northumberland is over thirty miles’ ride west from the nearest railway station at Alnmouth. I was cycle-camping here to research a magazine article, exploring the Otterburn Ranges: Ministry of Defence land only open to the public a few days a month, like our local GP surgery here in York.

Getting there took a whole day. A train to Alnmouth; the recently-installed cycle path from there to Alnwick that’s ideal for the fan of industrial estate architecture; up and over on the long B road to the small town of Rothbury, for a picnic at Cragside’s National Trust property; and then the long, long lane up winding, hill-lined Coquetdale.

I was camping at Barrowburn Farm, aka Nightfold Retreat, a lovely little wild-ish spot with a decent toilet and shower, superb views, a convenient canopy of trees to shelter me from the nocturnal rain, and a handy table for picnics, dinner and travelogue-reading.

The Otterburn Ranges are used for firing most of the time, but when the red flags are not flying, you’re encouraged to explore the selection of well-surfaced singletrack lanes that run over the area.

When everything’s closed, the road up to the head of Coquetdale is a twelve-mile cul-de-sac, as a few unlucky travellers must have discovered.

Traffic is virtually non-existent. I saw only one car and three cyclists during my circuit today. It’s hard to describe where the route goes via, as there’s no ‘via’ to say where it goes via. There’s nothing at all up on the tops, just vast sweeping moorland and frowning lumps of Cheviot in the distance. All very exhilarating.

It’s a remarkable piece of England, perhaps the remotest and furthest cycling experience you can have without crossing a border.

It’s a good idea to have tools and provisions with you. Getting an Uber in an emergency may not be as easy as hoped.

Well, after a couple of days incommunicado, it was good to get back to the civilisation of Alnwick before my train home, and the splendid Barter Books, the St Paul’s Cathedral of second-hand bookshops. As well as over quarter of a million volumes and a splendid fresco depicting countless authors and writers, it has its own giant train set.

I also enjoyed a pint of Cheviot Brewery’s Trig Point in the Tanner’s Arms, a fine real-ale pub where I was encouraged to bring my bike inside. Cheers.