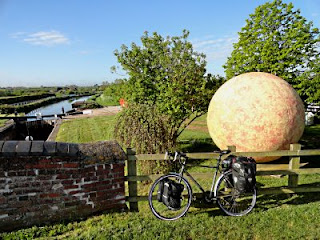 Another long and lovely day of cycling across England’s patchwork nation. Up the pleasant canal towpath from Taunton to Bridgwater this morning (picture). The route – part of NCN3, Bristol to Land’s End – has a scale model of the planets, rather like York’s. This is the sun, as if dumped at Maunsel Locks by an astronomical flytipper; Pluto is in a supermarket car park. 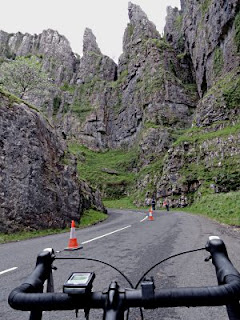 Some back roads got me to Cheddar. I spurned the chance to visit the caves – if I want to spend time in cramped, uncomfortable, dripping conditions, I can do that at home – or eat the cheese. But I did cycle up the Gorge (picture), which is one England’s few genuinely spectacular natural features, along with the Severn Bore.

At the top, talking of bores, I had one of those encounters with a cyclist whose sole intention is to subtly rubbish everything you do and suggest that his way is better. He was surprised I was using paper maps and not a GPS like him. He couldn’t understand why I had so much luggage and didn’t travel light like him. He was amazed I was camping and not using couchsurfing websites like any normal person.

I wanted to say yes but, if I couchsurfed, I might have to spend a whole evening with someone I didn’t like, such as you, but thought better of it. Instead I talked to him about helmets, another topic on which he arrogated expertise, and after five minutes of me explaining in detail the shortcomings of British Standard EN 1078:1997, he couldn’t get away quick enough. 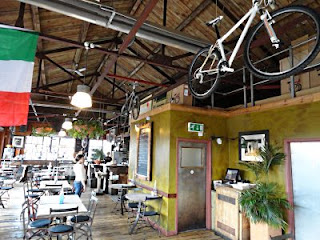 Anyway, I cycled past Chew Valley Lake, and into Bristol, where I had a late lunch at the Mud Dock Cafe (picture). I remembered this as the cool place to be when I used to live in Bath 15 years ago. Cycle cafes are relatively common now, especially in London, but Mud Dock was one of the very first: a place where you can have your bike repaired, buy a top-end road bike, or – if you’re feeling really really flush – even buy a sandwich and coffee.

From there I dodged a few showers and zoomed up the A38 to Gloucester. There were several other cyclists out on the road, some of whom I chatted to pleasantly. One of them was a doctor called Foster.