From Plymouth I went up the first bit of Sustrans’s lovely Devon Coast to Coast route. I did this with Nigel last July. It chucked it down with rain. This May morning it chucked it down too. I must come back to Plymouth in summer one day. If someone knows when the one summer day is. Anyway, the railtrail up the Plym Valley is fabulous, and I stopped to chat to some birdwatchers (picture). We saw two peregrines having a furious scrap mid-air. Last time I saw that sort of thing was on a Ryanair flight back from Malaga. 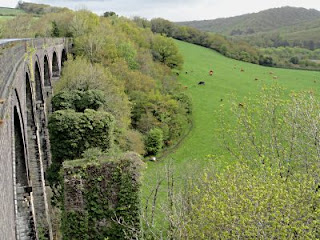 There’s some mildly awesome engineering along the railtrail, such as this viaduct (picture). Note the cows are standing up, thus disproving the fact that they lie down when it’s about to rain. 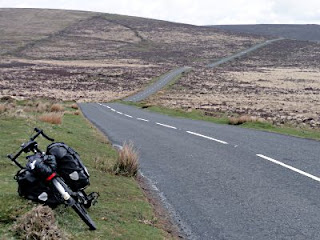 From Yelverton I rode across Dartmoor to Exeter. It was a superb ride, with lots of this sort of thing (picture). All I had for company was a few Dartmoor ponies, and several dozen Dutch tourist buses.

This road, the B3212, is supposedly haunted. Drivers have reported spooky hands taking their steering wheel and making the car veer off course. I saw this happen several times, coincidentally when the driver was gawping at the scenery or emailing on their iPhone. 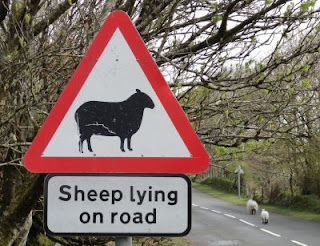 I’d never seen this sign before (picture). The sheep were indeed lying. They told me the road to Exeter wasn’t very hilly and it was only 20 miles or so.

I stopped for a coffee at the Warren House Inn, southern England’s highest and most remote at 1425 feet. Not as high as the Tan Hill Inn in Yorkshire, at 1732 feet, but a curiously similar experience as you walk in: the position of the bar, fireplace and tables are almost identical. Now that is spooky. 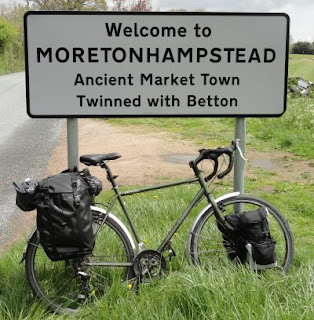 Moretonhampstead (picture) on the eastern edge of Dartmoor is the joint-longest single unhyphenated name in England, along with nearby Doddiscombsleigh and other southwestern jumbos such as Woolfardisworthy. (The longest multiple name is North Leverton with Habblesthorpe.) I took this just to show that the name is as long as my bike. 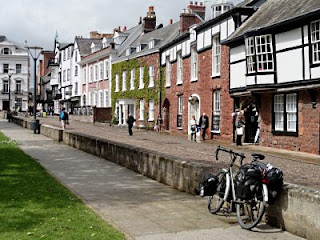 I had late lunch in Exeter, by the Cathedral Close (picture) and then whizzed up the old A38 to Taunton. En route I had a very pleasant chat with Sooz at Cullompton library, who told me another End-to-Ender had just passed through – on a skateboard. The remarkable details (he’s doing big daily mileages) are on the SkateLeJog Facebook page.

I camped just outside Taunton at a farm with an impressive range of squawking wildlife: peacocks, very free range hens, and toddlers in the next tent.