Day 2 of the River Wharfe ride featured a cyclists’ favourite back lane, the inadvisability of no headgear, a beer town’s strange tendency for unfinished bridges, and the unscenic dénouement of this most scenic of rivers in a field.

As I was camping last night, I had the bike fully loaded — front and back panniers, tent on the back rack. It’s been a couple of years since I had it so laden, and it was actually quite nice to get back to traditional touring — totally self-contained, heavy and lumbering. 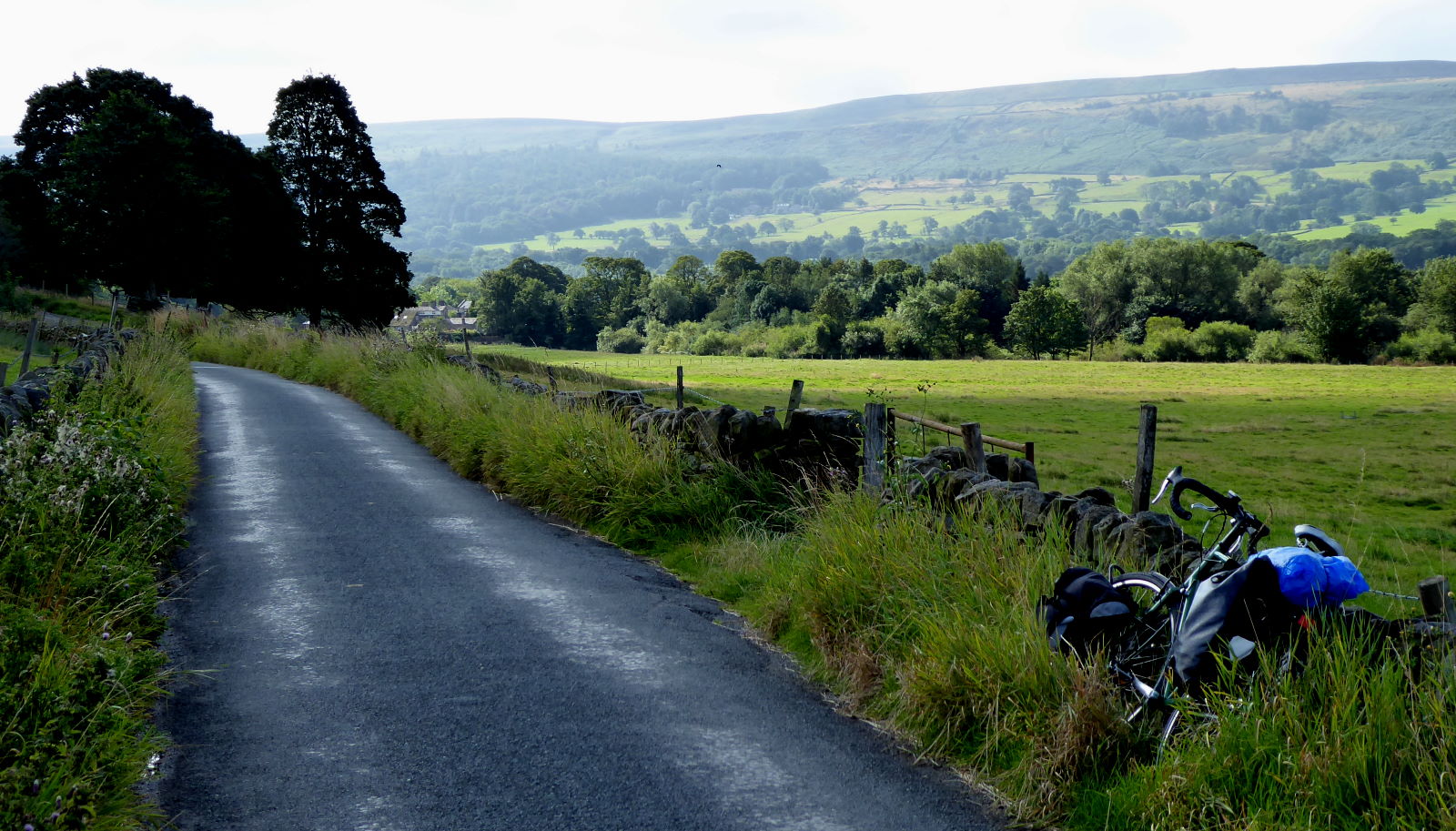 After a rainy night, I had a sunny morning for my spin down the back road (pic) between Bolton Abbey and Ilkley — a local cyclists’ favourite, to judge by the number of friendly waves and mornings from riders, who vastly outnumbered vehicles. Even sheep.

Them thar hills in the distance are Ilkley Moor, a place of legendary inadvisability for venturing without proper headgear. As for me, I wasn’t sure what was most suitable for today’s changeable weather. A sunhat with guttering, probably. 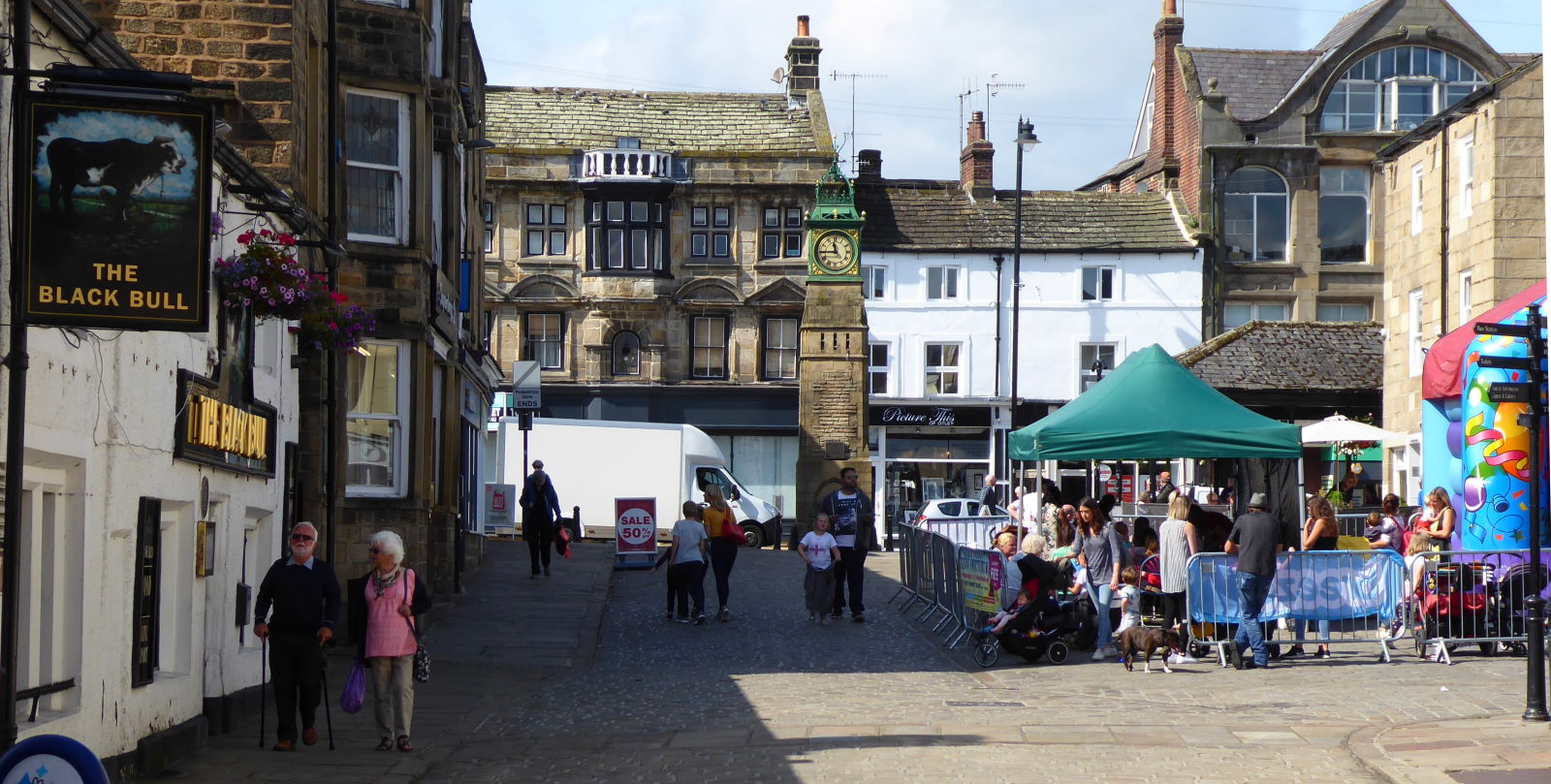 Ilkley is middle-class enough to have a branch of Booths. I don’t recommend driving there, though. By the time you’ve fought your way back home through the town’s jammed roads, that fresh food will be past its sell-by.

Anyway, I stopped for a coffee in The Commute, the cool bike-café that offers that elusive combination of copies of Rouleur magazine, a cycle workshop, and beetroot lattes. My snack downriver in Otley’s pleasant central square (pic) was a more prosaic sausage roll from Gregg’s. 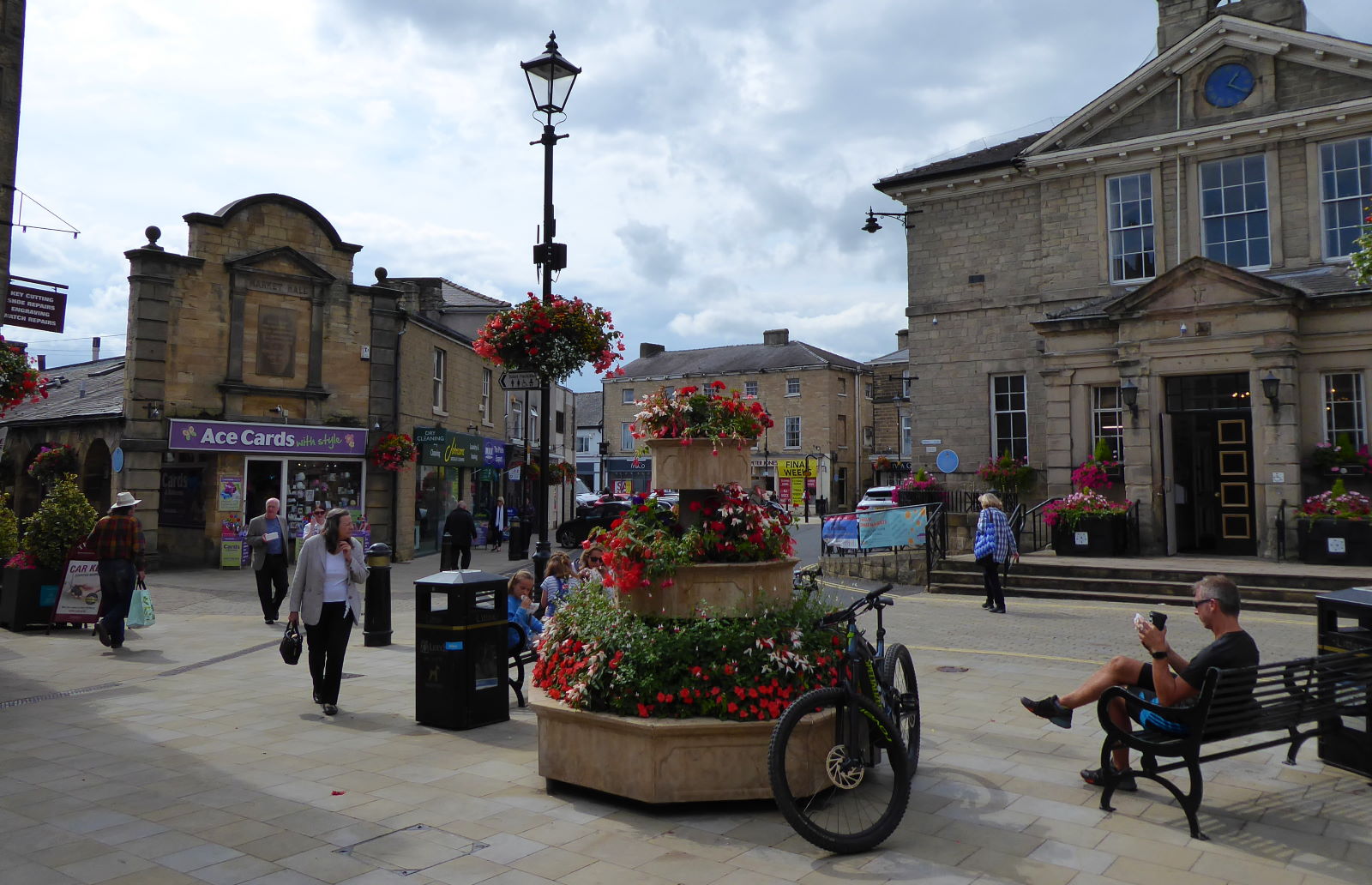 The look and feel of these Lower Wharfedale towns is fairly similar, and Wetherby’s courtyard-like centre (pic) came as a nice suprise after having cycled through its humdrum outskirts in the past. 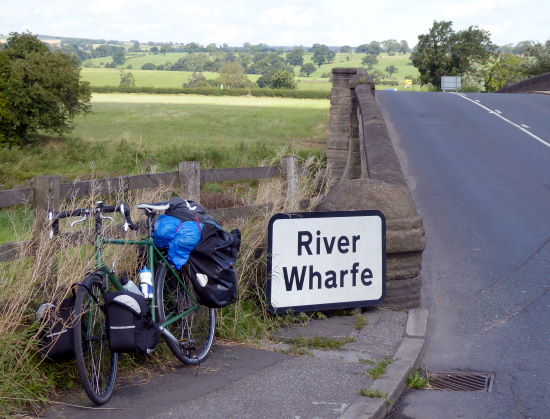 From here the land flattens out (pic), as the river starts to wind its way laconically to the Vale of York. And the drivers get more impatient and try to pass you no matter how tight and narrow the bend ahead. I followed A-roads to classy Boston Spa, home of ‘Georgian architecture and riverside walks’ according to the info boards. 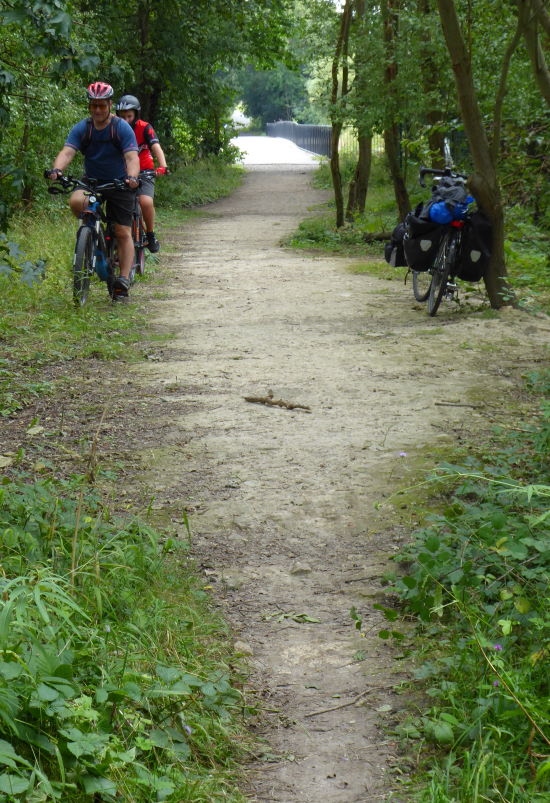 I was keen to see the Wharfe’s newest bridge (pic). As part of a housing development last year, the builders refurbished the old railway bridge over the river at Newton Kyme, just south of Thorp Arch Trading Estate (home to the British Library’s Yorkshire outpost).

It’s now on a fine walking and cycling path that leads from, er, the main road outside Tadcaster to, um, a totally unsigned, muddy footpath. Until the council links it to the half-decent railtrail that runs from here north to Wetherby, only locals in the know — or particularly adventurous cycle bloggers who spend ten minutes hacking through undergrowth on the southern side — use the bridge. 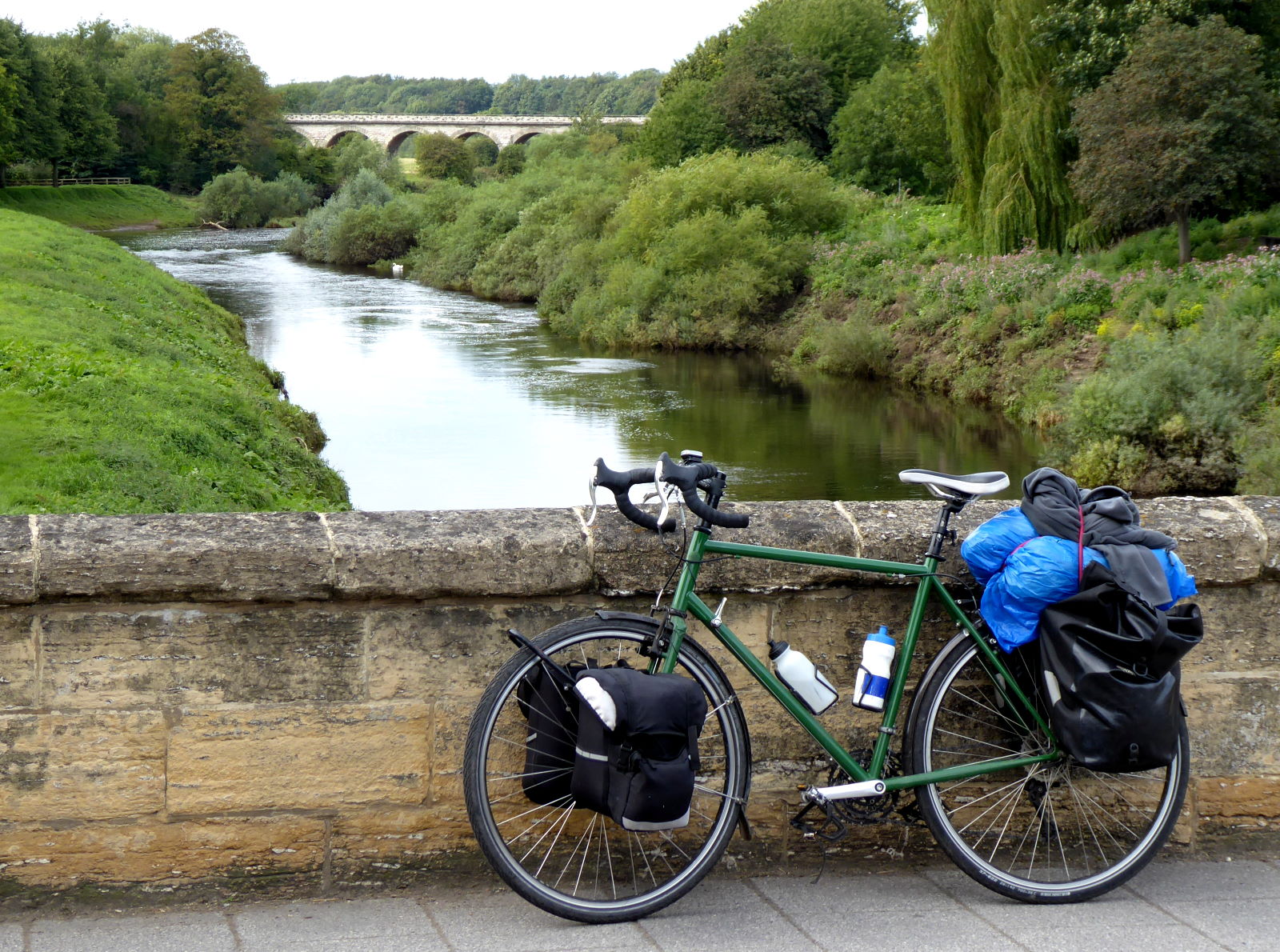 In fact, Tadcaster seems to specialise in haphazard crossings of the Wharfe. On a previous ride I stopped to admire the old railway viaduct (pic, in distance) which never quite got round to carrying passenger trains, while the town’s main bridge over the river (pic, parapet) was infamously washed away by floods in 2015 and only reopened in 2017.

The delay was largely down to intransigence of local brewing magnate Humphrey Smith, the shadowy boss of Sam Smith’s, one of many ale factories in the town. As I was following the Wharfe, it seemed appropriate to sample a beer made from the very waters I’d been riding. I nipped into the Angel and White Horse in the centre of town and had a pint of their famously cheap brew (£2 for a pint of bitter). A very budget-friendly way to drink, especially as you don’t particularly want another one.

Like all their pubs, all tech — smartphones, laptops, iPads etc — are strictly banned, to encourage conversation. To judge by all the single blokes sat nursing their £2 pint alone, it wasn’t working. 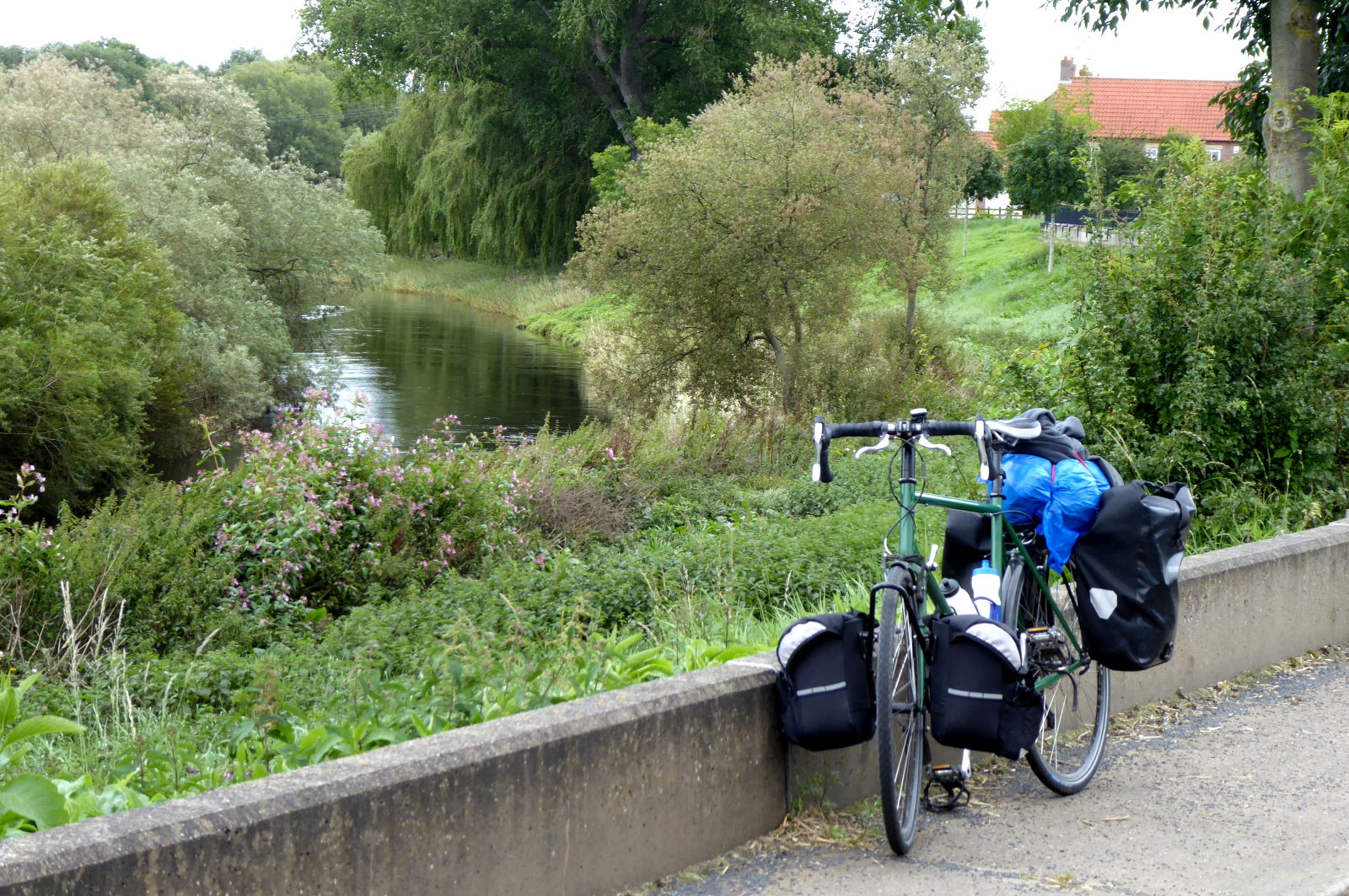 I was nearing the end of the trip. The Wharfe winds unspectacularly from Tadcaster through flat farmland; the last glimpse you can get from the road is in, and shortly after, the village of Ryther (pic). 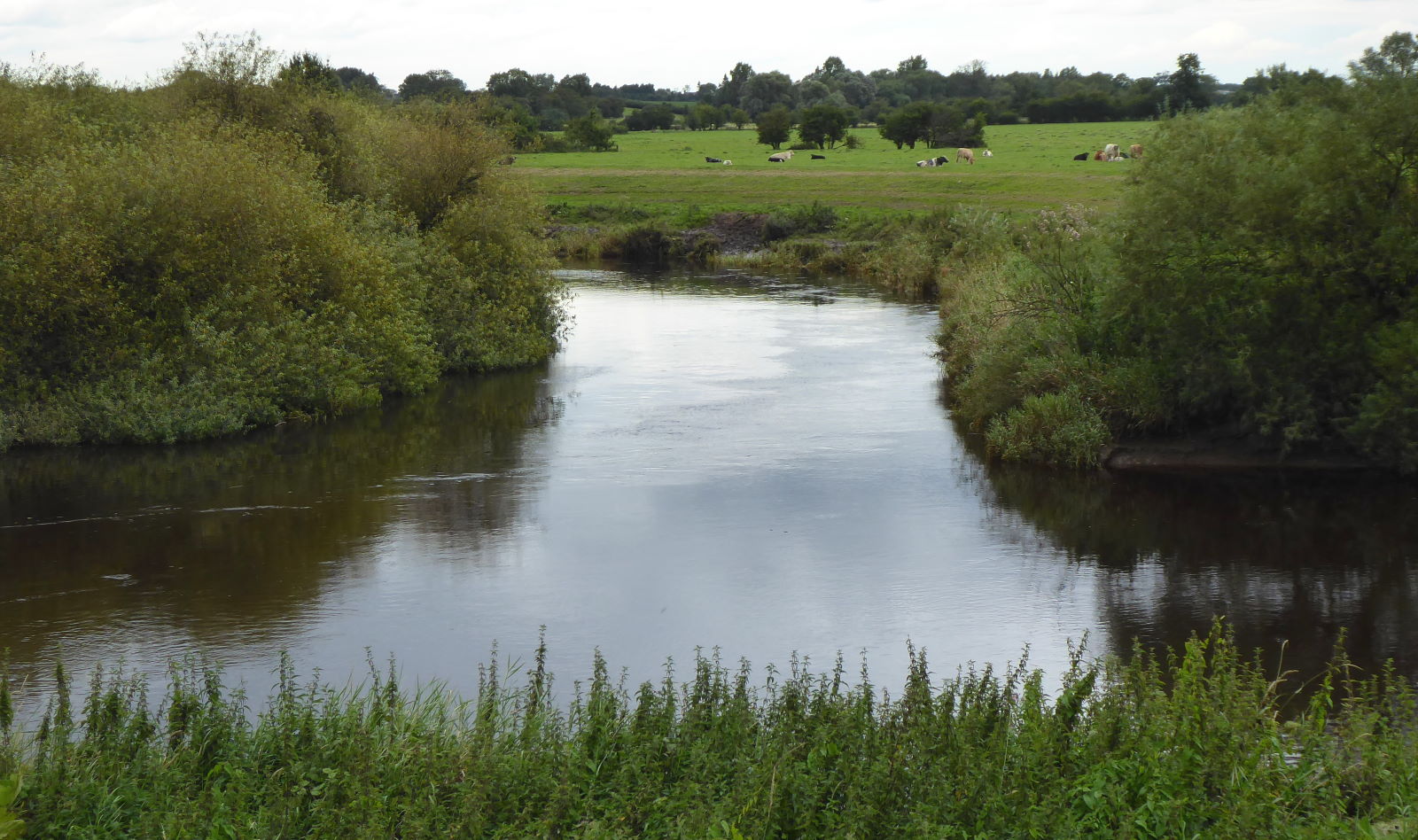 This is the mouth of the Wharfe (pic), as it joins the Ouse just outside Cawood. I had to leave the bike and plod along the river bank for a few hundred yards to find it. Hardly the Ganges delta; in fact, a rather ordinary end to a watercourse whose first half is one of the loveliest riverscapes in England.

I just had time to take a snap or two and get back to the bike before a deluge arrived. I sat it out in a bus shelter with a sandwich. Like I said, it’s been good to get back to traditional cycle touring.