A delightful day of local wildlife such as frogs (ish), storks (ish), dinosaurs (ish) and elephants (ish), fine scenery that could have come out of Scotland, and plenty of pleasant downhill riverside cycling. This was where I stayed last night (pic): a lovely, cosy little wooden chalet hostel in the woods on the edge of Zakopane. The only soft sounds you could hear were birds chirping, insects humming, and soundtracks of YouTube videos being watched on phones by everyone else in my dorm. Hmm. Do Young People know about earphones, or is that old people’s technology?

Anyway, I cycled out through Zakopane, enjoying the typical sights of the region: local wooden architecture, the backdrop of the grand Tatra mountains, and nuns (pic).

Perhaps she was off to play a medley of songs at one of the town’s many wooden gothic churches, or the Shrine of Our Lady of Fatima in Krzeptówki.

That’s the place that was built in thanks for the survival of Pope John Paul II (a Pole, of course) from an assassination attempt in 1981.

In which case I’d like to hear what would rhyme with, say, ‘Karol Wojtyła’, ‘Mehmet Ali Ağca’, or ‘9mm Browning semi-automatic pistol’.

There were a couple of animal statues which were never quite explained, and which I don’t quite think fit in to the traditional pattern of Podhale (‘Polish Highlands’) style: a dinosaur hatchling and an elephant (pic). 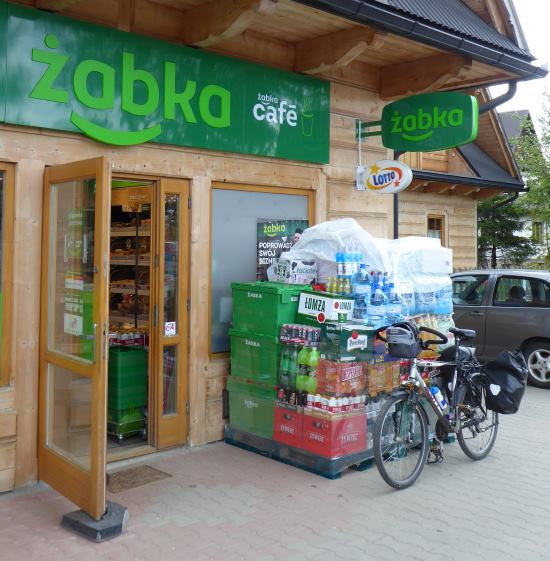 More traditional is the żabka, ‘frog’.

Not the amphibian, but the convenience store which is proving as useful and amiable as 7/11 stores did in our Taiwan End to End.

Very, in other words – a frequent, reliable and always-open option for sustenance on the road (pic).

Vanilla and chocolate pastry plus double espresso for under a quid! 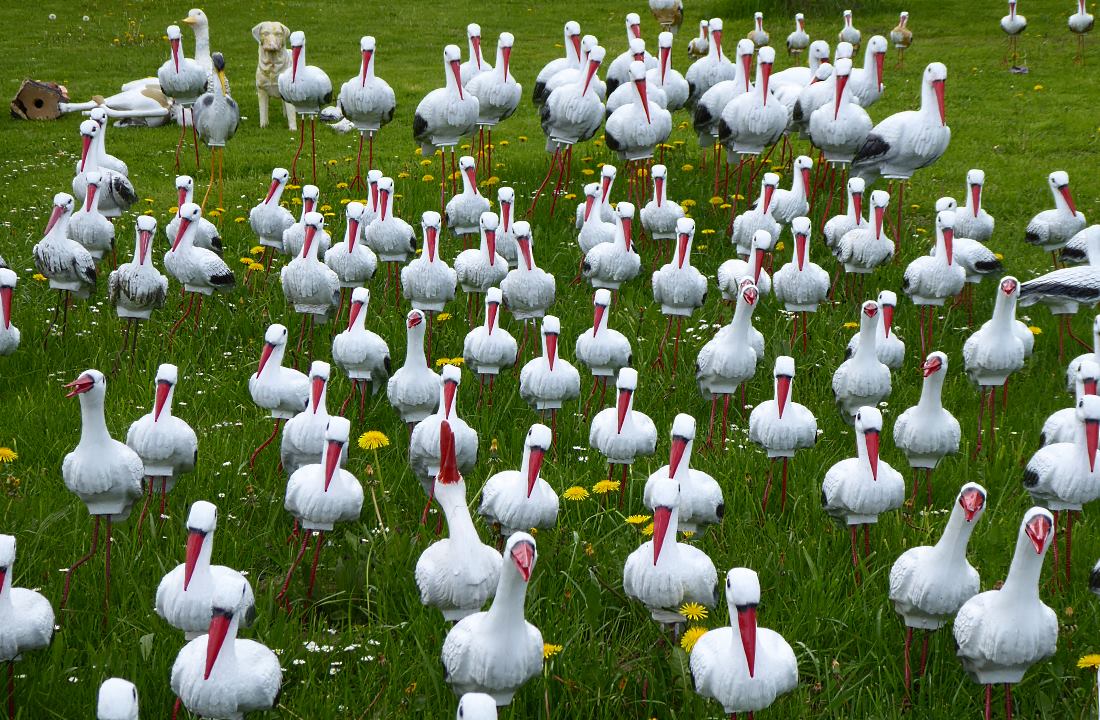 The next surprising animal was this flock of storks north of Nowy Targ (pic). Not real, obvs, but part of the display of a centre selling garden models such as hedgehogs, sheep, mushrooms, etc. And – yes – gnomes. My personal hell would be full of gnomes. Morris dancing. To Supertramp. In a certain B&B in Newport, Wales. 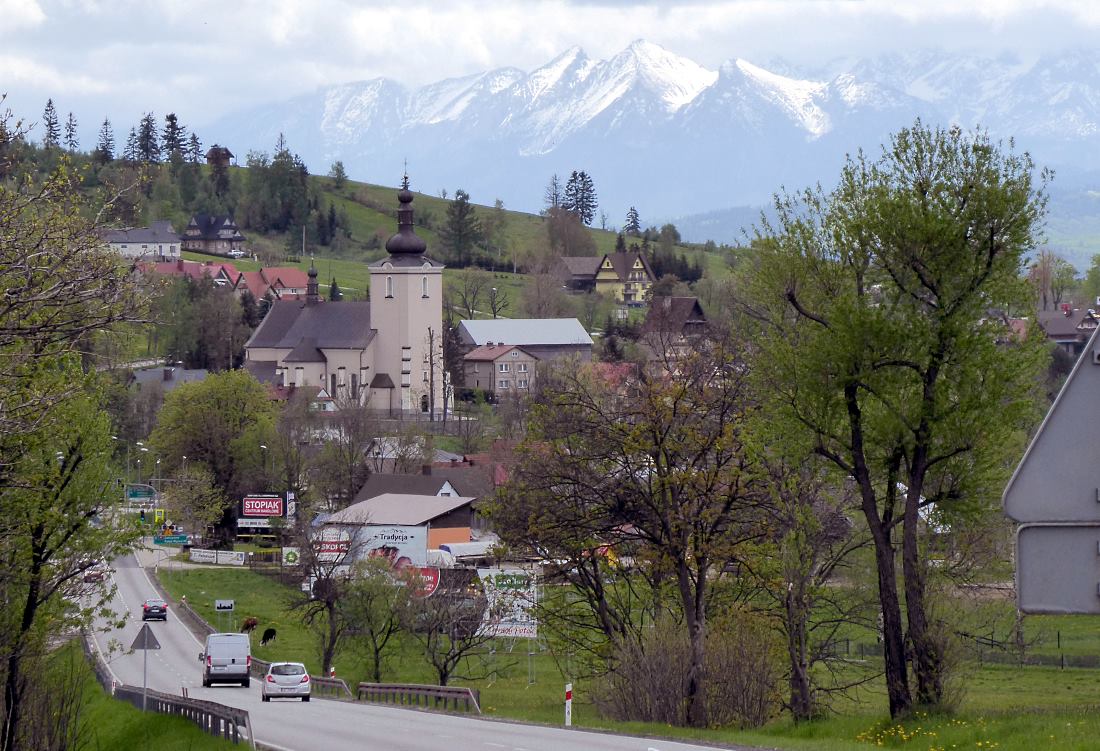 There was some climbing today, most of it a medium-strength haul up and out of Nowy Targ, with my last glimpse of the Tatras (pic). The road was quite busy, and I was glad I had (a) a rear-view mirror and (b) my mountain bike, because I could see when to avoid the HGV approaching from the rear by dodging off to the bumpy gravel shoulder. Not as scary as it sounds. But it does sound very scary.

However, much of today was spent freewheeling down quiet, well-surfaced lanes by the side of rivers through pretty villages. Lovely stuff. 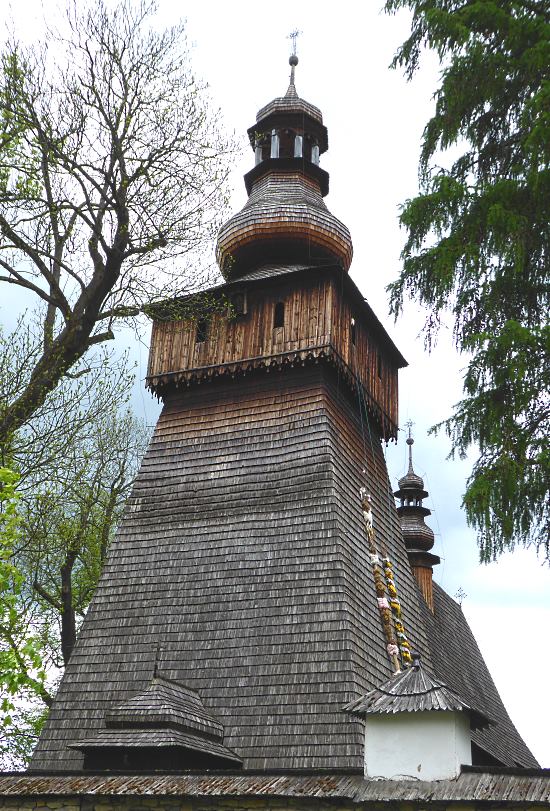 Here’s one of the traditional wooden churches in the town of Mszana Dolna, now a museum (pic).

However, I was more interested at the time in my view of a delicious local cafe’s cheeseburger, served in that friendly Polish way by a smiley young woman clearly impressed and amused by my Polish.

By 3.30pm I was in my destination of Kasina Wielka (pic), a scenic village in a landscape rather reminiscent of the Scotland around Pitlochry or Inverness. Though you’d be doing well to get a beautiful, clean, modern ensuite room with a kitchen and with sweeping views in a farmhouse villa there for £13. And, indeed, such smooth side-roads…