The promised day of sun and downhill proved one of drizzle and tedious climbs. Neither accuweather, nor the BBC website nor yr.no got the weather right. However, Polish TV seemed on the money (and I was pleased to see my rule of thumb vindicated: the worse the weather forecast, the more the presenter smiles, as if trying to make up for it).

And how openstreetmap’s fantasy elevation profile prediction of mostly descent turned into mostly granny-ring upward grind, I’m not sure. But it was a good day, starting with lovely countryside and ending with everyone’s favourite Polish city. 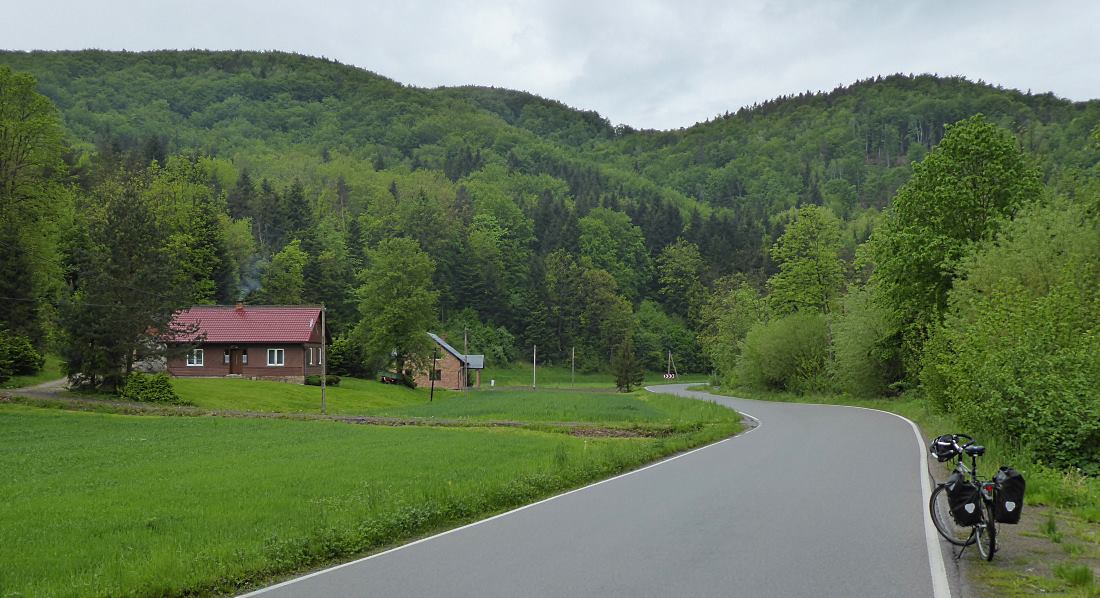 The first couple of hours was lovely flat riding through more landscapes that could have come right out of Scotland (pic), especially given the clouds and the light drizzle. The giveaway was that the village pizzerias didn’t offer a deep-fried option. 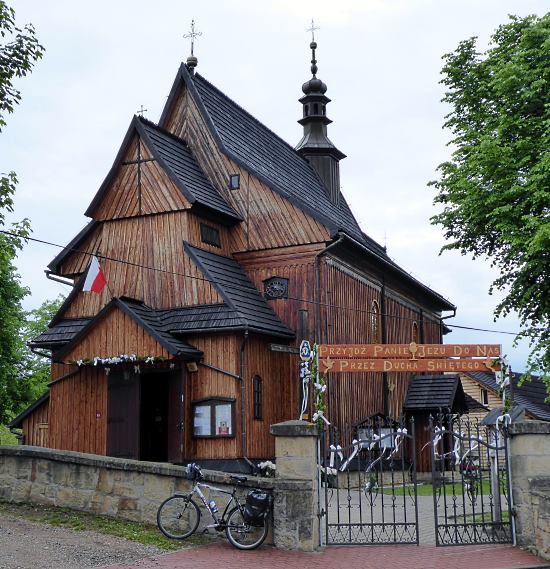 After gliding through the village of Szczyrzyc (pronounced as it’s spelt), I was startled to see that the village of Raciechowice (ditto) had a fine wooden church (pic) that was the start of one of the many Ways of St James to Santiago de Compostela.

I knew that western Europe was criss-crossed with various middle-ages pilgrimage routes that converged in Santiago, one of which (the Vía de la Plata) we cycled last month.

But I had no idea the network was as dense out here in Poland. Evidently the Church had huge influence over the pre-Enlightenment world. Who knew? Anyone who, unlike me, did history, I suppose.
My route took me through Wieliczka. Its famous salt mines – which include a huge astounding cathedral carved out of the solid rock way down in the tunnels – I’d visited before, backpacking in 2009, but this time I could explore the town’s fine parks and buildings by bike. 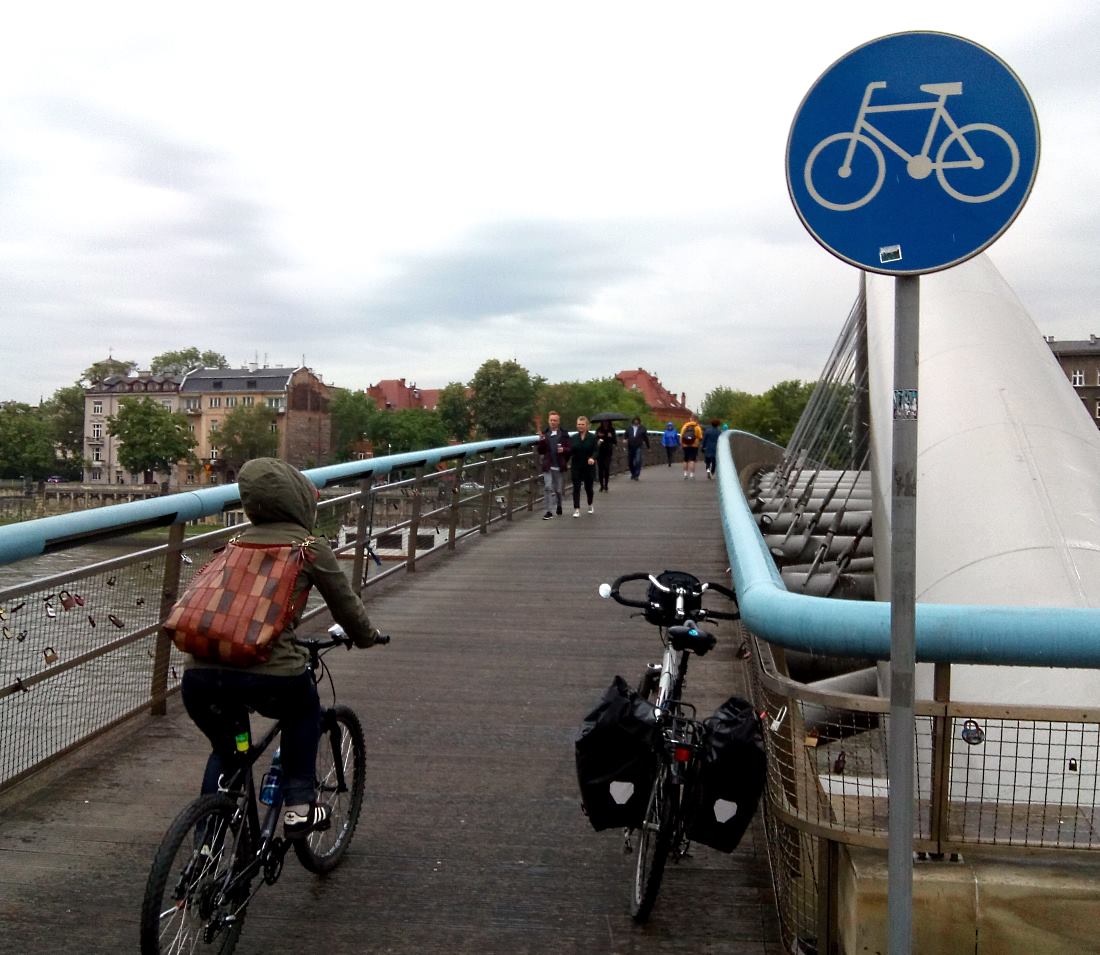 From there it was cycleways that excitingly criss-crossed busy tram tracks all the way to Kraków. Again, I was pleased to be on my mountain bike. The tyres are wider than the tram rails. I crossed over the Wisła river into the centre by this new ped-bike bridge (pic), though not so new that it isn’t already weighed down with those pesky love padlocks. 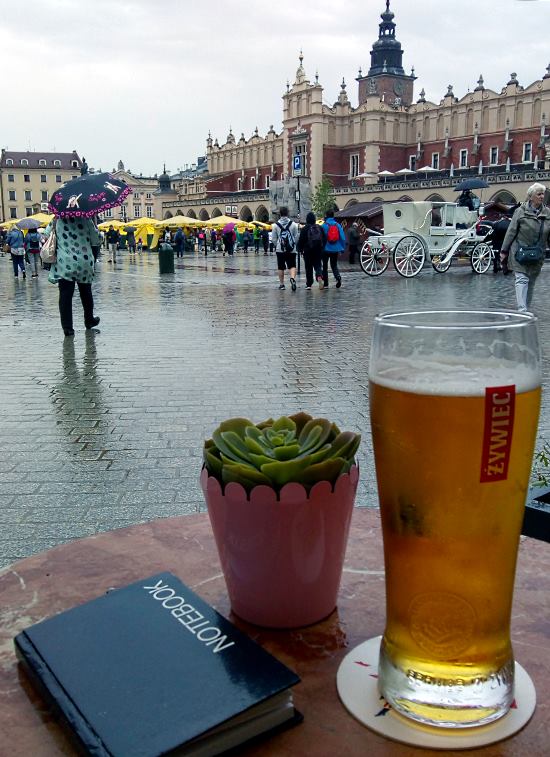 And so to Kraków. I first came here in 2009 and was enchanted right away – partly because I could afford a central-square beer even at tourist prices, and despite a late drunk arrival in my hostel dorm managing to misappropriate one of my only pair of shoes. In a freezing November.

I’ve been several times since, fortunately finishing with the same quota of footwear I started with, and always been delighted.

But this time was much better, because I was on a bike.

It was chucking it down when I arrived, so the only sensible option was my usual arrival strategy: a pricey but unmissable pint of Żywiec (pronounced as it’s spelt) in a bar overlooking the main square, watching the tour groups and horse-drawn carriages, and listening out for the hourly trumpet call from St Mary’s Church (pic).