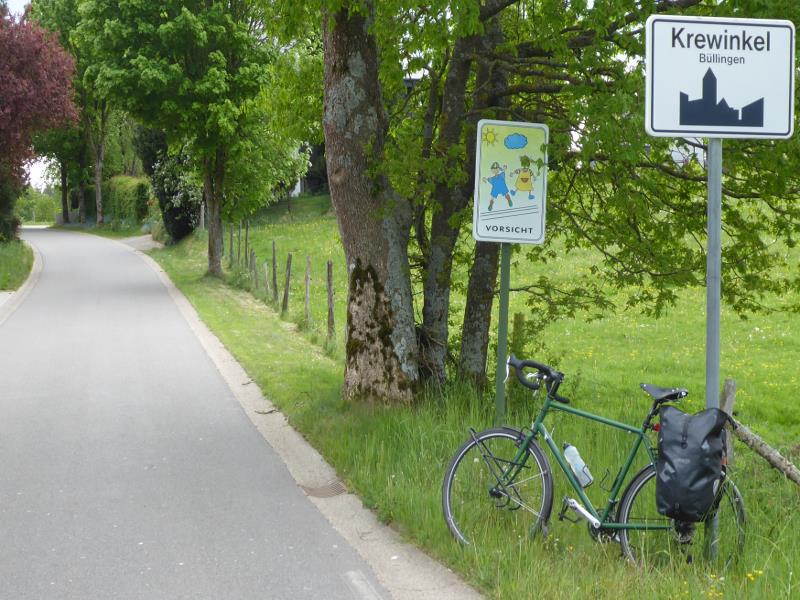 I completed my Belgian End-to-End with a 17-mile hop to the border this morning. Well, Belgium’s pretty good at handling hops. It was all very German feeling, of course: the look and feel of the houses, chalets and forests, hilly landscapes, and car dealerships.

The ‘official’ easternmost settlement is Krewinkel, a village that was described by my friendly Airbnb host last night as nice and with a well-known church. It seemed a bit mundane to me, but it was my endpoint of several days of very enjoyable cycling, which is agreeable enough.

Well, not quite endpoint. A mile or so further up the hill, straddling the border, is the village of Kehr. Its Belgian part is the most easterly habitation in the country; a car wash sits on the border itself. I took some ceremonial snaps and resisted the temptation to run my now-dusty bike through the machines.

Oddly, there seems no signage marking the border. No Wilkommen in Deutschland, no Auf Wiedersehen Belgie. But then, perhaps to the German speakers, you’ve been there ever since St Vith.

But it’s done. I’ve successfully collected another End to End. No punctures, no mechanicals, no problems at all in fact.

It’s a very stress-free place to cycle, whether down to the shops or across the country. And though some people might find the linguistic mix bewildering – the Dutch might be all Greek to them, the German Double Dutch, French Chinese, and Esperanto Volapük – I relished the chance to get by in such lingual diversity.

And beer is pretty much the same in anyone’s language. Here is a country where cyclists debating a double versus a triple are probably talking about something in bottles, not chainsets.

Belgium’s maybe not the most spectacular country on the eye, and there’s plenty of harsh industrial stuff.

But with a culture strong on chips, chocolate and that beer – as well as visual art both refined and popular – I’ve found plenty in it to engage with.