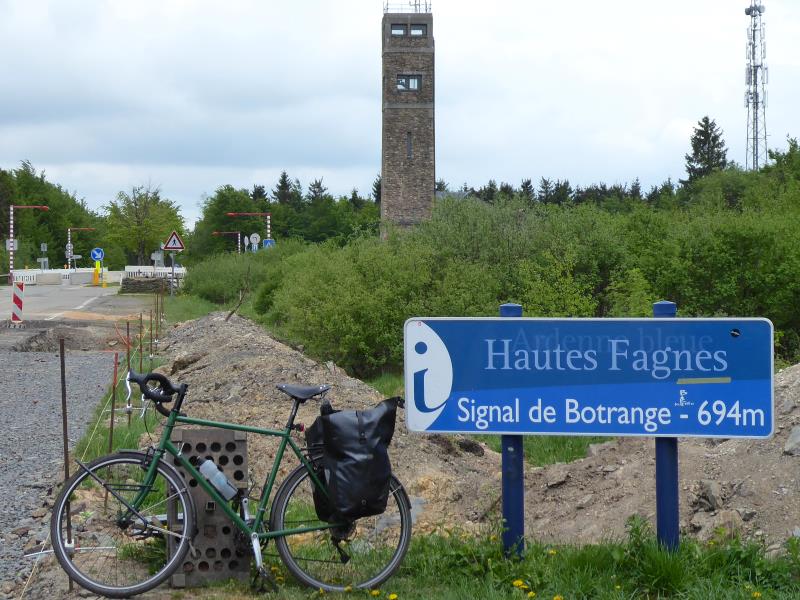 A sandwich of a route today: two bread-and-butter railtrails on the outside, with a meaty middle of Belgium’s highest point. All of this took me from the French-speaking heart of the country to its German-speaking minority eastern fringe. So instead of un sandwich, make that ein belegtes Brot.

The forecast wasn’t anything to write home about. (Though with post-Brexit stamps to Britain now costing a whopping three euros, postcards are too expensive to send anyway.) It threatened thunderstoms and heavy rain on and off all day, with feisty sidewinds, little of which actually came about.

With a large hostel breakfast inside me, and some liberated items from its fruit bowl inside my panniers, I cycled round central Liège for a quick look at the city. It’s described as ‘gritty’ and ‘functional’ rather than ‘beautiful’ or ‘elegant’, which put me in mind of my town bike.

Certainly the historic centre will save you a fortune in euros not having to write home about, though it was bustling and amenable enough on this sunny morning. I was impressed, though, with Santiago Calatrava’s mighty, graceful station building, like a giant King’s Cross canopy, a computer framework made real.

A climb through suburbs, some gritty and some well-swept, got me to the first railtrail of the day. The Belgians do their railtrails properly, with wide continuous tarmac surfaces and good signage. Halfway through my fifteen or so miles east, though, the promised rains came. It threw it down for half an hour, and I stayed dry in an eerily deserted grassless park under a kind of modernist covered market structure clearly not designed by Santiago Calatrava.

But the sun soon came back out and I could resume my gentle, stress-free progress. Suddenly I realised there was scenery to my left, with a view down over the lower landscapes to the north.

A steep hill joining the trail up from there was evidently some sort of staple bike climb: stencilled on the road at the summit was the message YES YESS YESSS. I was also amused by a sign for horse parking at one of the railtrail’s town centre breakout spaces.

At Clermont (one of Wallonia’s prettiest villages, the sign said, though that sounds suspiciously like being one of Norfolk’s highest mountains) I peeled off the railtrail and headed south along roads. After a joyous hurtle downhill I had some of my smuggled fruit in the rather shabby, but pavement-cafed, central square of Limbourg.

I was heading for Belgium’s highest point, so I knew – being good at this sort of thought process – there would probably be some climbing involved. Out of Limbourg the main road climbed long and steady, with a decent wide shoulder to evade the whooshing traffic. At Jalhay’s supermarket I stocked up on energy drinks, crisps and chocolate, and ground my way up the last few kilometres of shallow but slow ascent through cool forests.

That highest point is Signal de Botrange, a tower, monument and cafe in the middle of moorland and trees. There’s no feeling of summit; you’d have no idea where the loftiest bit is if Belgium’s equivalent of the Ordnance Survey hadn’t surveyed it ordnancely, and put in a trig point.

I once joked, while writing about a cycle route round Yorkshire’s Three Peaks, that Pen-y-Ghent – one of those tops – was ‘the highest point in Belgium’. Curiously, I was sort of right. Pen-y-Ghent is 694m high; Signal de Botrange is 694m high. Amazing coincidence, eh? Geography imitating humour, or something.

But to get to the Signal, I had a problem. The road was blocked to all traffic thanks to comprehensive works, remaking the surface and apparently installing some high-quality cycle lanes. Right now, though, it was a building site, with concrete pipes, makeshift gravel tracks, diggers, lorries, holes and piles of sand. The Signal itself had some works in the car park and was closed too.

However, in Belgium it seems cyclists get plenty of respect, and not just from the drivers. The roadworks crew happily waved me through on the ‘closed’ road, and I got to the Signal to have it all to myself. The cafe was out of commission, so just as well I had my snacks with me.

I enjoyed the view down over the lowlands to the east (there’s only moortop views to the west) and climbed the steps to the top of the engagingly installed mound behind the Signal itself: it’s 6m high, making its summit exactly 700m above sea level.

Lots of downhill now, and thanks to those closures, I had an empty road to revel in. The shallow gradient was just right for freewheeling, steady and not too fast, and I could take in the views happily on my way down.

At Waimes I took the day’s second railtrail, part of the Vennbahn, a very long (125km) and excellent path going roughly north-south down the Belgian–German border. It’s great: impeccably surfaced of course, smooth and wide, but – unlike typical railtrails, which funnel you unexcitingly through trees – this stretch of this one has entertaining views of hills, fens and the odd disused historic viaduct. My last eleven miles today from Waimes to Sankt-Vith was a delight.

Somewhere just out of Waimes I crossed my final linguistic border, and German replaced French. Why Belgium has a German-speaking minority region is a complicated and often puzzling mattery of history, but then why Belgium exists at all is, too. But, anyway, all the signs were now in German first, and as I rolled into the small former railway-junction town of Sankt-Vith, everyone in the place’s lively beer cellars and pubs was speaking German.

I visited a supermarket to get some dinner and beers – a good selection in the Carrefour, notably the Val-Dieu Triple, still made by real monks in a real abbey – and checked into my Airbnb, a little town house all to myself. There’s not much can beat the relaxed satisfaction of sipping an artisan beer in the bath after a full day’s riding.