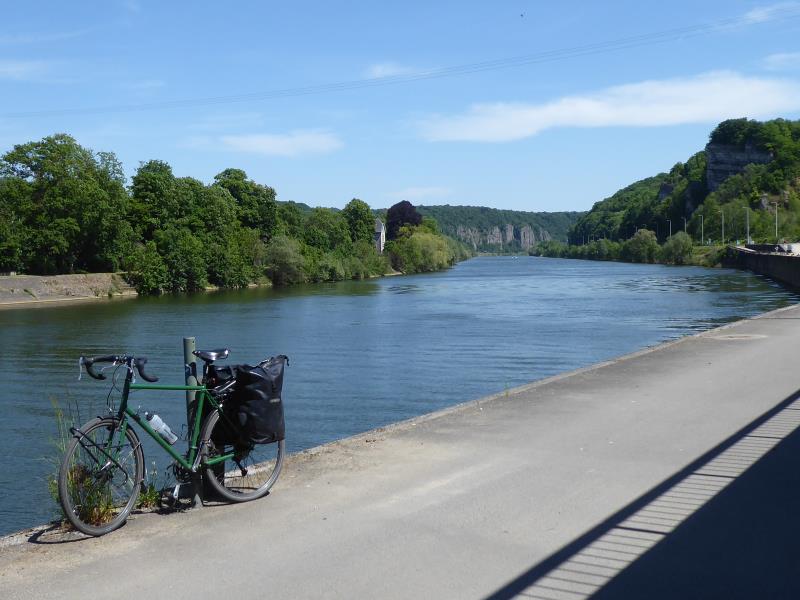 Today was a colourful affair of mostly riverside riding, the colours being forest green and cement factory grey. Yes, the Meuse is a grand waterway, but like most of Belgium, industry is never far away.

But first I went through the Centre of Belgium. The country’s exact centroid – as determined by their equivalent of the Ordnance Survey – is marked by a monument in the village of Nil-St-Vincent-St-Martin, which sounds like a garbled football result.

I was the only person at the centre of things this lovely morning; everyone else was peripheral. Just as well, as I had hydrated diligently before departure and there were no public toilets.

It had been an early start – a little too early, I suspected, for my affable Airbnb host Charly, blearily wishing me good luck in his dressing gown. But it meant I had plenty of time to get to Namur for lunch.

Getting from Wavre to Namur was a back-roads delight on concrete farm service lanes, which are effectively car-free and make an excellent cycle route system.

Route-finding is straightforward too, using a Dutch-style system. Junctions are numbered within a region, so you can follow the clear and frequent direction signs by numeral: getting from Wavre to Namur for instance might involve the sequence 8 – 22 – 56 – 3.

Negotiating your way through the network for a long journey can thus be as simple as remembering a couple of phone numbers. Except nobody can remember phone numbers now everything is stored on your mobile.

Nevertheless, I spent a couple of happy hours trundling along the lanes across farmland that reminded me of the Yorkshire Wolds’ spare beauty, getting to Namur for lunchtime.

I was a bit surprised to find no riverside restaurants or bars – it’s all working towpath – and the citadel is, well, a bit ugly. But in the cobbled historic centre I enjoyed a shady lunch at a pavement restaurant in the Place d’Armes. Even for my modest meal though – spaghetti prawns and a small glass of white wine – the bill resembled the numerical sequence of a cycle route.

The remaining forty miles from Namur to Liège was all alongside the river. The Meuse is big, running nearly 600 miles from France through Belgium to the Netherlands, where it joins the hugely industrial Rhine–Meuse–Scheldt delta.

This stretch isn’t always pretty: I cycled through countless factories, power stations and industrial estates, and had to weave between piles of sand and stone, conveyor belts and silos, and heavy vehicles silently parked for Sunday. But there was enough foresty green around to make it a pleasant ride.

And the towpath was, well, just great to cycle: as wide and smooth as a road but with no vehicles, and almost all continuous. The headwind and the occasional diversion for works weren’t too bad, and on a beautiful sunny day, the riverside was owned by cyclists: I never went more than a couple of minutes without being passed by a group of road bikers, or a grey-haired couple in matching clothes on e-bikes, or – deflatingly – someone on a shopping non-e-bike.

It was a long journey under the hot sun, though, and the final approach to Liège through factory scrubland and shabby main roads dragged a little. But at last I was in the centre, failing to spot Santiago Calatrava’s iconic railway station building, and riding through a riverside park packed with families enjoying the sunshine.

I fancied an ice-cream, but there were more people in the queue than the population of some of the villages I rode through this morning. It would have taken longer to get served than I’d taken to ride from Namur.

So I headed for my hostel, for a much-needed shower, and even more much-needed beer. My Kasteel Tripel tasted rich and toffee-like, but not oversweet, with notes of apple strudel and chocolate. And it was perfectly chilled. With beer like that, who needs ice-cream?