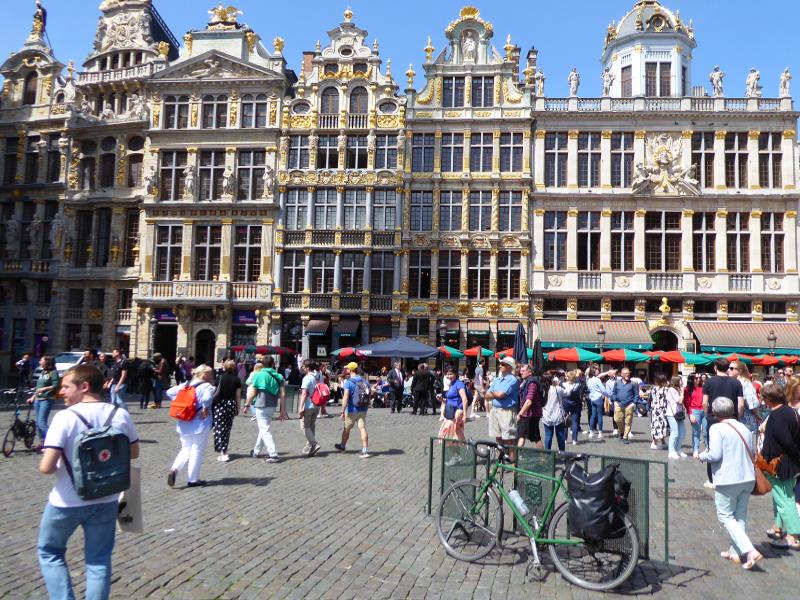 A functional day today, all on good main-road-cycle-paths, through Brussels and across the great linguistic divide. And all in perfect weather: sunny but not glaring, warm but not hot, breezy but not windy.

I glided along canalsides from my Gent hostel with a continental buffet breakfast inside me, with a Dutch twist, in the shape of chocolate. The shape being little squares.

Soon I was on the N9, the old main road now superseded by a parallel motorway. Such roads are often good for cycling, being direct and wide and well-surfaced but less used. Well, this one – thanks to the bike-friendly infra prevalent in Flanders – is a cracker.

I revelled in the ride to Brussels along this old main road, the N9: a well-separated or segregated path all the way, with priority at all crossing points. It’s noisy and busy of course, but safe-feeling and easy and a sheer delight to ride on a nice day like this.

Brussels came as an excitingly multicultural – and sometimes a tad shabby – change from the antiseptic feeling resorts of the North Sea coast. Getting to the Grand’ Place was fairly easy and not too hectic, and I had time en route to call in to a local Lidl to forage for provisions among the multi-ethnic clientele, some from as far away as Yorkshire.

Ah, the Grand’ Place. The country’s geographical centre may be a few miles from here, but this is Belgium’s heart. One suffering from AF and arteriosclerosis, if the quixotic tourists clogging it up are anything to go by.

And it is indeed a grand place, as my very East-Yorkshire grandad Jack might have said. It was full of tourists, and costumed players evidently waiting to perform in some re-enactment, astoundingly scenic and majestic as I know from many previous visits… and was rather hot and shadeless. I found a square nearby with a more shady opportunity for my picnic lunch.

Out of Brussels I followed the N4, which also had a good, mostly segregated, cycle opportunity along its length. At Overijse I stopped to enjoy my hunting and gathering from the Lidl earlier on, and snacked happily by the church and then by the pond: much more villagey feeling than the map circumstances suggest.

Immediately south of the village of Tombeek (after a longish climb, in contrast to flat-as-a-pannekoek landscapes hitherto) I crossed a major boundary: the political and linguistic divide between Flanders and Wallonia, Dutch and French, hard-nosed industrial and quality-of-life.

I was crossing into the Other Belgium. Instantly, the language changed: posters and signs and public information was in French. Casual encounters were now made routinely in French, whereas just the other side of the line they’d been in, well, obviously, English.

I rode to my Airbnb for the evening, just south of Wavre, and sat in the sunny garden to the chirp of birds, writing up my journal and savouring the wine I’d sourced from Lidl. It was very pleasant to be outside. Which was just as well, seeing as I was locked out of my Airbnb.

Eventually the owner phoned me back to let me know where to find the key, and I could get in. I wallowed in a bath, and felt very happy indeed. This place is just a handful of kilometres from that geographical centre of Belgium, and it feels like a halfway in all sorts of respects.