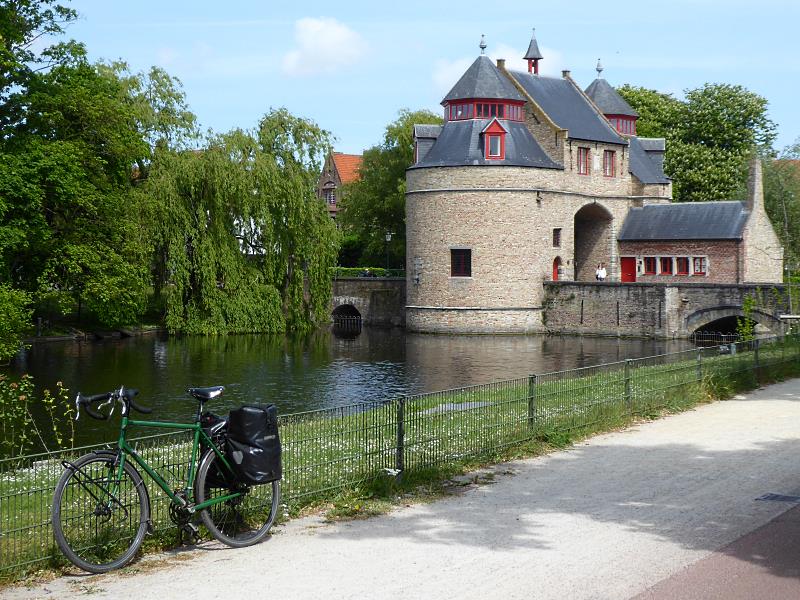 It was too early to explore De Panne’s adventure park, Plopsaland, as I left. In a cartoonishly Belgian touch, it’s named after a gnome called Plop. Not a real gnome, obviously, but a character from a children’s TV series. I wonder what effect this sort of thing has on shaping national character. Belgium was, after all, the home of the Smurfs, weird blue dwarfs with an unfathomable success in novelty singles during my childhood. Made me what I am today.

So I set off east along the seafront, propelled by a tailwind that scooted me along all day as if on an e-bike. Which was confirmed by the fact that all the cyclists coming the other way, into the headwind, were on an e-bike.

De Panne is the last of a chain of resorts, all with vast blocks of flats looking blankly over the North Sea, and expansive tiled promenades running along the lemony sand lined by restaurants, bars and bike hire places.

No bucket and spade beach shops here. It’s all a bit cheerless if you’re expecting a British-style donkey rides or end-of-the-pier entertainment. There was an amusement arcade called Funland which looked anything but.

But the prom path was smooth and clean, and sand-free, thanks to the grain-sweeping machines being driven up and down, about the only accompaniment I had this sunny morning.

At Koksijde I admired the beach huts, many decorated by their owners with a startling range of illustrative styles, from New Age Poster to mildly pornographic. Several of them owed a lot to Belgian surrealists such as René Magritte and Paul Delvaux, in which case the bailiffs may be round soon.

In fact, there are plenty of artworks along the beach, many with a surreal quality, or else inspired by cartoon characters from the country’s great tradition of comic strips.

At Nieuwpoort I snacked by the beach, feeling like a sandwich packaging tester trialling new materials in a windtunnel, and reached the end of my seaside leg at Oostende. It’s a name I remember as significant in the days when ferries were more important for travel between Britain and the continent, and the huge rail station hinted at its heyday.

The resort’s seafront feels a lot more like a seafront resort, with souvenir and tat shops, arcades, and laughing young people pedalling erratically round on multi-person carts. The preferred mode of transport in De Panne was more likely to be Zimmer frame. I didn’t see anyone on the beach making a sandcastle, though in the strong winds that would have been a doomed construction project.

From Oostende, for the rest of the day, it was essentially canal towpath. In Flanders this doesn’t mean an muddy, unmade track through weeds alongside a narrow, much-locked waterway. It means a wide, car-free, smooth, continuous tarmac road parallel to a broad shipping channel. There was a steady stream of cyclists both ways, ranging from the Strava-watching roadie to sit-up-and-beg shoppers; no wonder, it’s gloriously stress-free experience.

I skirted Bruges. I didn’t need to stop and explore; I’ve been many times before, and I’ll be staying here on the way back. But I did glimpse the grace and calm of the backstreets, quietened by the cycle priority that makes cars guests.

A couple of detours around construction works on the towpath, which annoyingly didn’t have any diversion signs, provided some sort of break from the endless smooth waterside riding. But the anonymous little villages I went through, stopping to consult my free phone app for a route back to the canal every two minutes, made me appreciate the ease of the towpath all the more.

The long, steady, calm, enjoyable day’s cycling finished at Gent, another fine Flemish city I’ve visited before. I was staying at Treck Hostel, a sociable and delightful place on a canal path which had a gently lively bar. I sat in the sun with a couple of small Jupilers before getting another bargain fast-food dinner in the Turkish neighbourhood behind and relaxed with that rare but much-appreciated hostel luxury: a dorm to myself.