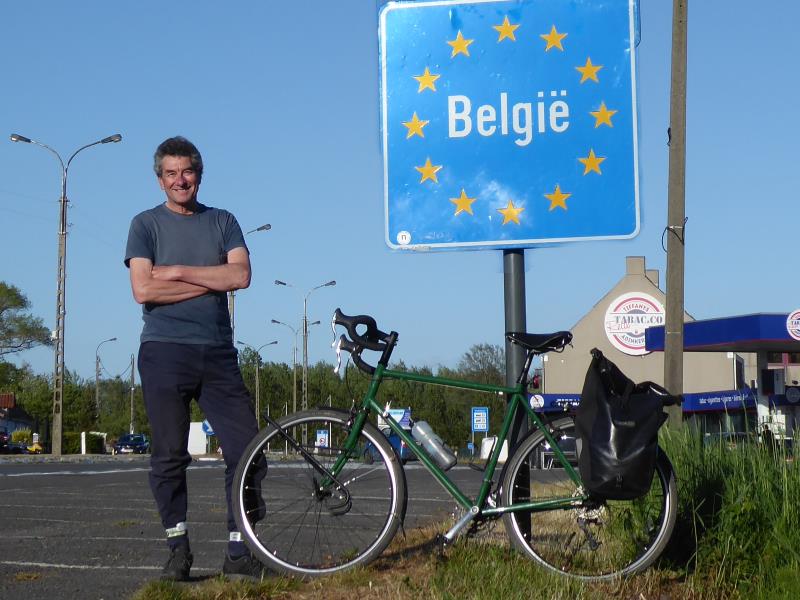 Ah, Belgium. Where beer, chips and chocolate are culture. And three countries for the price of one – the Dutch-, French-, and German-speaking ones. Which may explain why it feels so expensive. But I’ve been here many times, always enjoyed myself hugely, and now I’m doing the place properly with an End to End. Which means cycling the 250-odd miles from west to east, from De Panne to Krewinkel, through Flanders, Wallonia, and, er, the German bit at the end.

My trip will take me through the three territories, so I’ll get a chance to find out how they see each other. As little as possible, I suspect.

So, monsieur, how do Wallonia and Flanders get along?
–Why, as brothers, of course!
So relations are friendly?
–No, we are brothers. You choose your friends.

Anyway, the Dover–Dunkirk ferry was almost deserted. (It’s operated by DFDS, not fire-happy P&O. Hmm; whether it’s Brexit or global warming to blame, it seems sharks have arrived on Britain’s shores.) I rolled off after a smooth crossing looking forward to the twelve-mile breeze to the Belgian border…

…only to realise that the ferry terminal, contrary to my rather casual map research, was an additional dozen miles away from Dunkirk centre. Oh.

Fortunately I had a generous tailwind, fine sunny weather, and enough time in hand, so I could enjoy the extra miles as I fizzed along decent paths and cycle lanes to, through, and out of Dunkirk itself.

From the eastern edge of the town I took the splendid Vélomaritime path, which goes all the way west along the French coast to St Malo. But I was heading east, of course, to the Belgian border where the path finishes. It’s good, a mix of smooth concrete, fine firm gravel, and tarmac – and all car-free, along or on the old railway.

There’s no obvious border post-Schengen, of course. The only way I could tell at first was the different top-level domain suffix on shop website addresses. The former customs post is now a sweetshop. There’s one historic marker, though: a small white stone dated 1819 with F on one side, and on the other… ah, of course, N for Netherlands: it didn’t become Belgium until 1830.

(In case you’re wondering about the two pictures above, the sunny picture was on was on my way in, the rainy picture on my way out a week later. I know Belgian coastal weather can be changeable but no, it didn’t change that much in the time it took me to walk to the other side of the stone.)

It was only a couple of miles into De Panne, Belgium’s westernmost place, the leftest of the beach resorts along its North Sea coast. But it was already pushing eight o’clock, and by the time I checked into my Airbnb (not cheap, but the least punishing of the accommodation options) and went for a seafront stroll, it was already too late to eat or drink. All those pricey promenade restaurants and bars were closing down.

We may have been in Flanders and the firmly Dutch part of the country, but the shrugs and sorry-not-sorry apologies (désolée, on est fermé, monsieur…) were definitely Gallic.

I was a bit downhearted. The beach, while clean and clear, with nice blue skies and nice honey sand and bathing huts all mysteriously labelled PAULA, seemed characterless, and the rows of anonymous modern buildings lining the promenade looked dull and boring. And I was hungry and thirsty.

But, wandering the town centre with hope fading like the light, I stumbled on a Turkish kebab place. Hooray! Kebabs on the continent are a class above the greasy British imitations, and I happily troughed through a huge and tasty five-euro pita kebab, washed down with a couple of small Jupilers. I’d arrived. The adventure had started. I ambled back to my accomm happy.