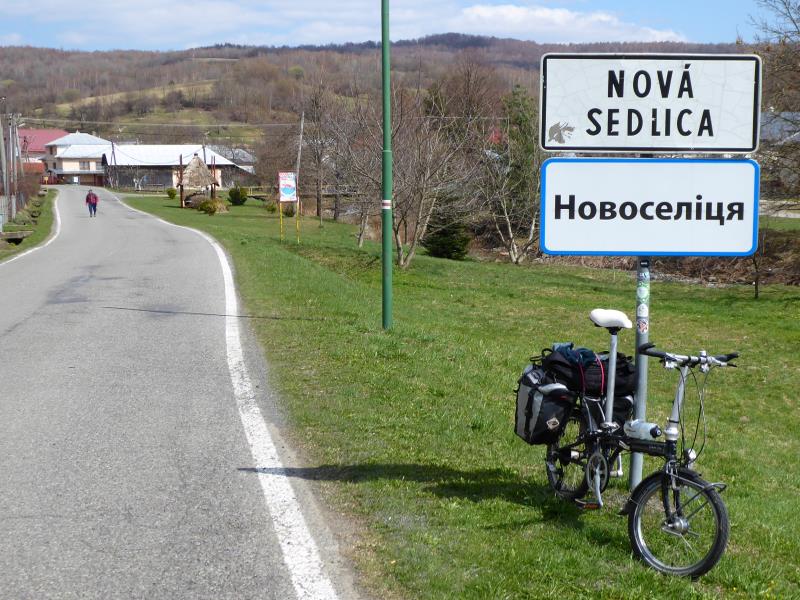 The final day of the Slovakian End to End proved perhaps the most enjoyable cycle-touring of the lot. Especially for fans of wooden churches, such as Eastern Slovakian Orthodox adherents, termites, those with an aversion to nails, and now, cycle bloggers.

Indeed, I saw three fine full-size examples in situ today, as well as several models. My ride today to Slovakia’s easternmost point coincided with one of their many themed cycle routes, the Cycling Icon Trail – not a reference to the country’s genial champion rider Peter Sagan, but a circuit round its remote right-hand side taking in some of its most charmingly ligneous places of worship.

The weather was fine all day, despite gloomy app forecasts of cloud and wind. I started with a downhill down a lane from my rural hotel back to the main road out of Snina, which I still can’t help singing to a Supertramp theme. I don’t know why. I don’t even like Supertramp.

I picked up a few supplies from a village potraviny and was soon on the quiet back road that heads out nowhere except the few remaining settlements before the tarmac, and the country, runs out on the slopes up to the Ukrainian border.

It was lovely cycling. Just birdsong, very little traffic, on quiet country lanes winding their flat way along valley floors with generous hills either side.

After my first wooden church stop in Jalová, where I had a quick snack with a view over the village, came perhaps the biggest climb of the entire two weeks, up to a reservoir and over a range of hills to the village of Príslop. Not exactly mountainous, despite the dramatic cutting at the summit; just rather hilly. It still felt all rather Caledonian.

In Príslop there was a picture-perfect picnic place down below the church, with an all-wooden covered picnic table and freshwater spring. I hesitantly put some in my water bottle, but needn’t have worried. Just as I was leaving, a woman turned up in a car armed with five big plastic canisters which she filled up with the stuff.

There was a lot of downhill here. I was really enjoying this.

The second wooden church came in the village of Topoľa, and I had a second chance to see it in the next village, Ulič. In the centre is an outdoor mini-museum of models of a dozen or so of the region’s best examples, though most were destroyed by fire or war, or moved to (full-size) outdoor museums elsewhere. Several still remain in other parts of Slovakia, and in the neighbouring areas of Poland, but the handful still standing round here are all a delight to see.

I had an ice-cream and energy drink while admiring the models, and pondered why wooden churches – which traditionally are constructed solely with joints, and no ironmongery at all – are so appealing. Hmm. Maybe if you’re a devout Orthodox Christian, you like the natural qualities of a tree, but aren’t so keen on nails, for obvious reasons.

I don’t suppose, with their rather limited shelf-life and tindery combustibility, wooden churches appeal to insurance companies: all today’s examples date only from the 1700s, as rebuilds of earlier casualties. But I like them a lot, even though I’m not a particular fan of, say, sheds.

Anyway, I was getting to the end of my trip, and wanted to savour every last metre. I was going slow, and stopping frequently to take it all in. I saw my last complete wooden church, in Uličské Krivé (still used for regular services), and trundled alongside a river for the last approach to Nová Sedlica, the omega of my Slovakian traverse.

The village is fairly typical for the region. There’s a guesthouse or two, a local bar, a riverside, a grocery, a bus service, a picnic spot, a few information boards about hikes and rides in the area. Strange to think that, on the other side of those hills, a war is going on. There was no clue here.

I was pleased to see a DIY bike-maintenance station too, with pump and tools for roadside tweaks. But my bike didn’t need any. My Dahon Speed TR touring folder, or is it folding tourer, has done me pround on this End to End. Two weeks of generally easy riding, about forty miles a day. No punctures, no mechanicals, no strange noises or funny wobbles. Enough gears. Ample luggage capacity. And when it had to fold up, like to go inside the cramped lift of a former Soviet hotel and even more cramped room, it could.

I cycled as far east as you can reasonably go in Nová Sedlica, along a lane to a guesthouse and project centre with a few information boards outside about the National Park. The road sign says no traffic, and I was pleased to interpret this as being the End of the Line, the End of the End to End. I took some ceremonial snaps and trundled back to the village for a beer.

I’ve enjoyed this quiet, modest, but modern and sensibly-Europeanised country a lot, and its pleasant, mostly young population. I’ve often got by in German, or in extremis, in Google-assisted Slovak. I’ve particularly enjoyed the cheap but excellent beer – nowhere in the world does booze have a better price/quality ratio, except perhaps neighbouring Czechia – and the very reasonably priced accomm.

I’ve ridden along some terrific bike paths, part of their very promising work-in-progress of national cycle routes, and through some very nice hilly scenery on flat or gentle gradients on quiet lanes; the surfaces have been no worse then Britain’s. I even survived the total shutdown of Easter, except for one day where breakfast, lunch and dinner were each a bag of crisps.

In short, I’ve seen Slovakia from End to End, and from most sides. At leisure. I feel I know the place.

En route, I went past places called Mád, Lazy and Lúčky; perhaps the same applies to me.