The longest, and best, day of the tour so far. It was Palm Sunday, start of Semana Santa, and the faithful were walking through Plasencia’s main square with fronds (pic). Our search for meaning in life was a little different at this point, but it was successful: we did indeed find a cafe open serving excellent coffee and churros. 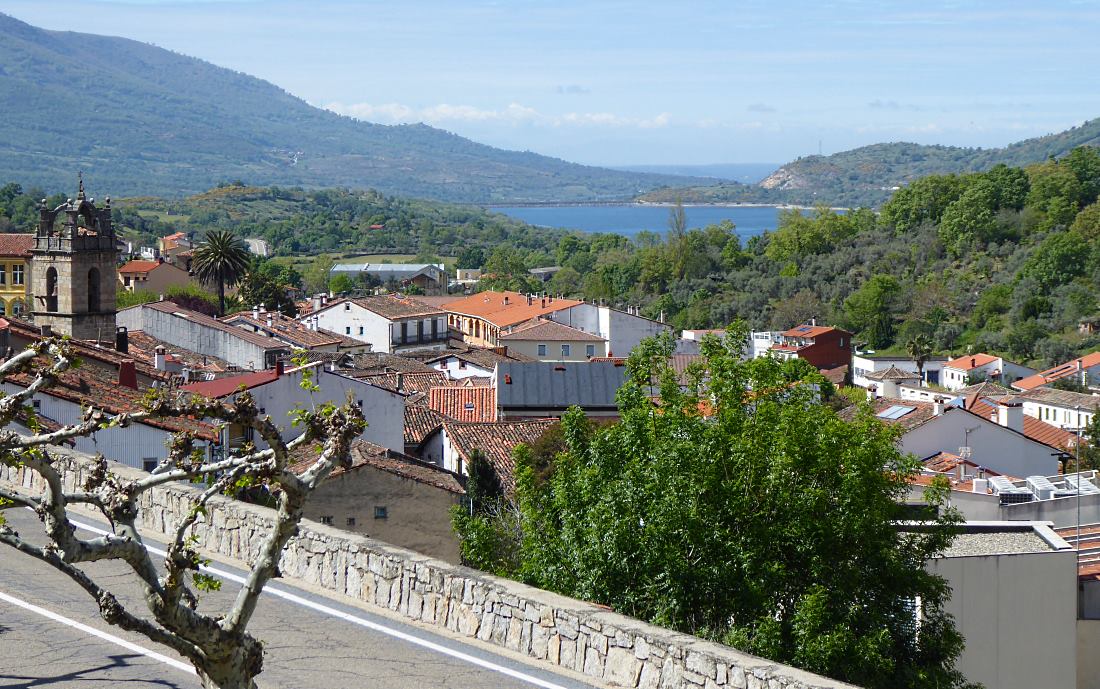 After a misty start, the sun burnt off the haze and we had a hot, sunny morning of zooming along the N630. We hairpinned up the alps-like mountainside thermal spa resort of Baños de Montemayor (pic), complete with residents wandering around in bath robes. Compared to where I live in York, where residents wander round Sainsbury in their pyjamas.

We didn’t, of course, come to this ‘Baños’ twenty years ago on our World Bath Tour. (Or any other, such as the one in Ecuador I visited in 2014). On that grand tour we restricted ourselves to places specifically called ‘Bath’, or twinned with the Somerset spring town. Or which we fancied cycling to.

Lunch was in the central square and the shade at Béhar (pic), a ridgetop town with locals ambling around still holding palm fronds and olive-tree branches. We ambled around holding ice creams. 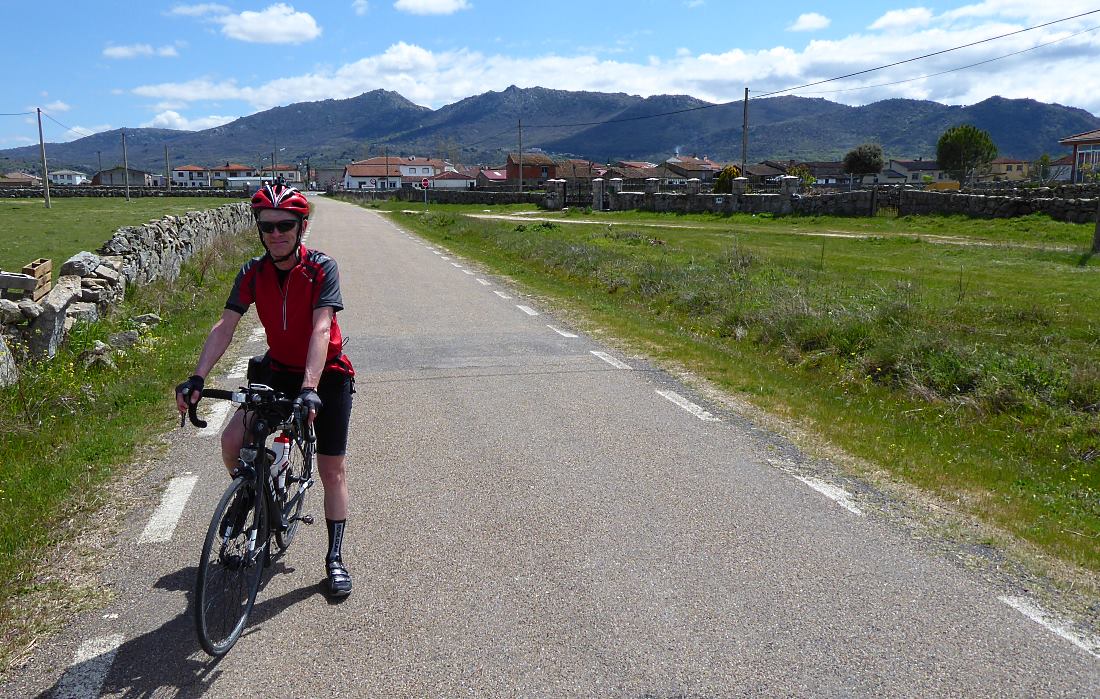 After Béhar we left the N630 to go on fifty miles of parallel back roads up to Salamanca. It was a splendid change of pace – literally, for the first few miles of climb – through sleepy villages with zero traffic: we had the lanes to ourselves (pic). 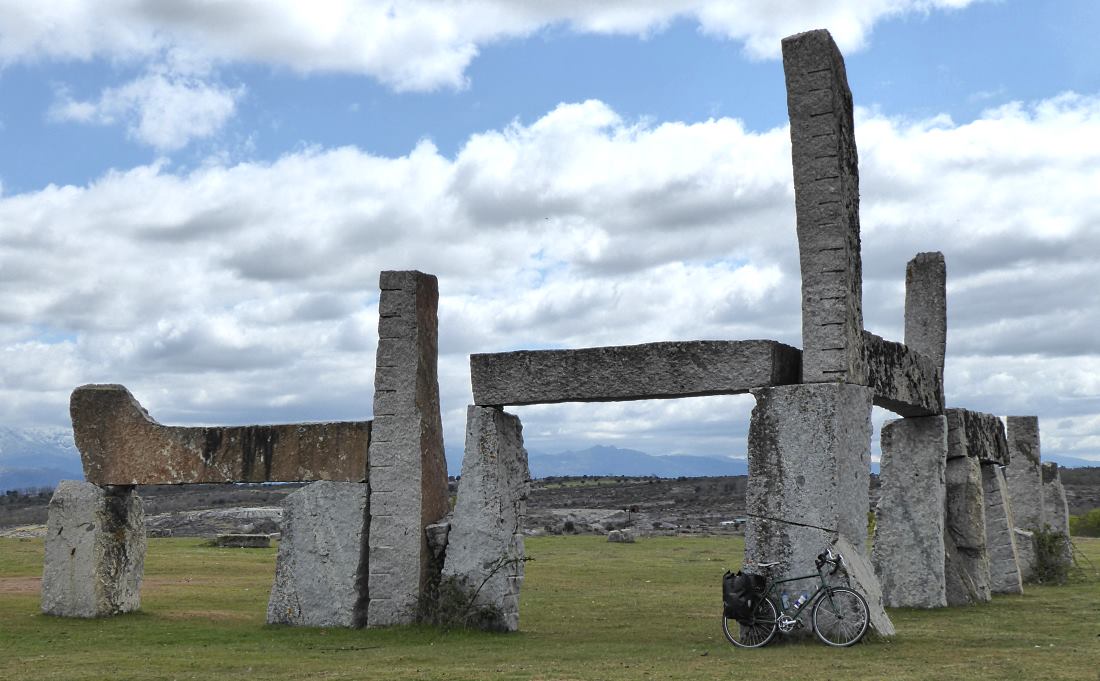 In the village of Los Santos we passed this poor imitation of Stonehenge (pic). Nothing like the original: no gift shops selling twenty quid tea towels, no restaurant with four-quid coffees, no sniffy information staff telling you to not to park your bike there.

Presumably the back road route we cycled was a Roman Road (pic), to judge by its no-nonsense straightness, by the aggers often visible on either side, and by the fact that it’s called ‘the Roman Road’.

With an excellent surface of fresh tarmac – and still hardly any traffic – it made for delightful, fast cycling as we approached Salamanca.

Well, we weren’t quite so fast on the climb en route up to 1100m, but we were pretty brisk down the other side. 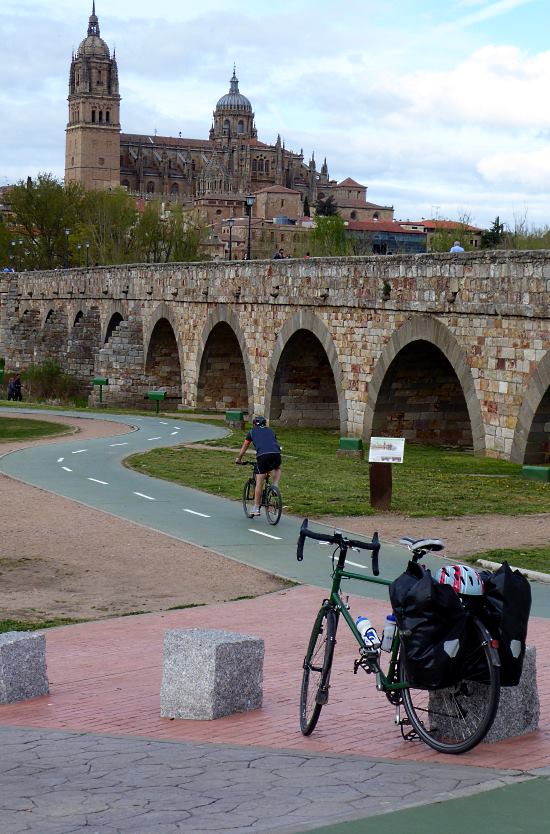 After a welcoming few km of cycle path taking us through the modern outskirts, we crossed into the historic centre over the Roman Bridge (pic).

I was very, very happy to be back in Salamanca, perhaps my favourite place in Spain, where I did a Spanish course a few years back.

I didn’t come away being able to translate Cervantes, but I got pretty good at ordering food and drink.