Stretching the best part of a mile from Piccadilly Circus to the edge of Hyde Park, Piccadilly is an imposing procession of upmarket stores, hotels and organisations. 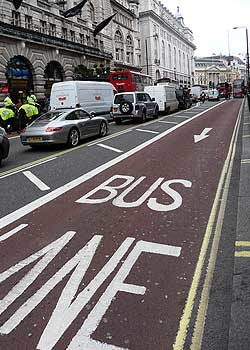 But if you’re heading for Fortnum & Mason’s, the Royal Academy or the Ritz by bike, beware the one-way system that means you can only go eastwards on the eastern half.

(There is a bus lane going the other way and cyclists do use it, but really it’s buses-only, and there’s no convenient parallel route thanks to one-way impermeability.) 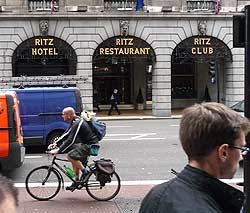 And if you are popping in for tea at the Ritz, the friendly doorman in the top hat will direct you to safe hotel bike parking round the side. (No, I didn’t actually go for tea – you’ll see why below.) 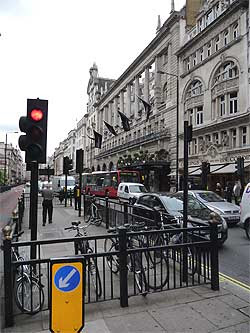 As with virtually every other Monopoly street in central London, there’s not enough bike parking, as if nobody believes anyone could possibly be visiting the Royal Academy or shopping at Fortnum’s by bike. Railings are pressed into service a lot, even when there are racks (as here).

Piccadilly is not a pleasant cycle. Its straightness and perceived width invites traffic to go fast. It’s busy and hectic and not always logical, and its western end dives down into an underpass, which isn’t very polite.

The street is, you suspect, like some of the people you see shopping in Burlington Arcade’s superposh boutiques: rich and elegant, but ill-mannered and not very well brought up. 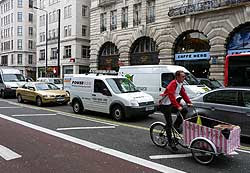 If you’re heading on west to Hyde Park or the Albert Hall, use the crossing and enjoy the car-free route underneath Wellington Arch, home of London’s most hurried crossing.

Monopoly’s Piccadilly costs £280. What could this buy you there? You could get a decent hamper from Fortnum & Mason’s. Not the best, obviously – the ‘Dinner Party’ one is £300, while their top edition is £500 – but you could snap up a ‘Mayfair’ hamper for £250 and still have almost enough left over for tea at the Ritz (£37 per person).