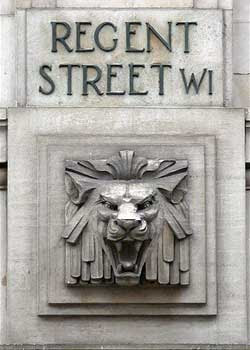 Every single building in Regent St‘s mightily grand three-quarters of a mile is at least Grade II listed. They’re clearly keen to not to spoil the magnificent early-19th century streetscape by putting in, say, cycle parking.

The street runs north (one-way to begin with) from Carlton House (down near St James’s Park) up past Piccadilly Circus, and crosses over Oxford St up to the BBC rocket-launcher at Broadcasting House in Langham Place. You’re then only a peach-stone’s throw from a picnic in Regent’s Park. It’s a useful but often hectic cycle. You grapple with buses, taxis and cars desperate to get to that red light 50m away as fast as possible.

The street boasts such upmarket names as Café Royal, Hamley’s, Dickins and Jones, and the Apple store. It’s something of a shopper’s parasite. Er, paradise. Every Christmas, the focus is on Regent St’s famous illuminations, or if you’re using a cheap digital camera like mine, on the back of someone’s head in front of you. 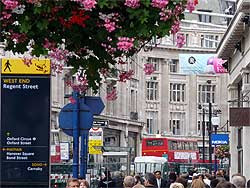 Regent St has its own website, run by the Regent Street Association, with tips on how to spend the most money possible. Curiously, its ‘Frequently Asked Questions’ section omits ‘Why isn’t there any effing cycle parking’. No doubt the answer would be, We’re fed up of telling people – there’s no demand. 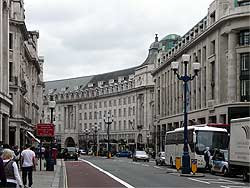 Monopoly’s Regent St costs £300. What could this buy you there? It won’t quite get you the cheapest iPhone (£342.50) from the Apple Store, which is a shame, as you can get nifty little apps for it that enable you to report potholes or post amusing pictures of bad cycle facilities to Twitter.