We wondered what the best waterworks-based cycle experience would be. Cycling past Bazalgette’s Cathedral of Sewage, perhaps, on the Greenway? But the Greenway’s out in remote east London, and rather dull. There’s little look at except the broken glass shards in the middle of the path, little to do except mend your punctures en route, and little to report except the youths who stole your phone while you did it.

Biking along the path of the New River in Islington? But there’s not much to see from the saddle. Visiting the offices of Thames Water? Ermm, probably not. 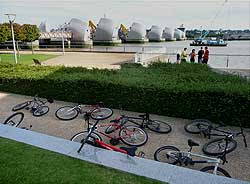 So we decided on a slightly different sort of Water Works: the Thames Barrier (all pics), whose vast metal sluicegates first protected the capital from tidal surges in 1983.

Southwark Cyclists organised a visit last year and we were given a talk full of genuinely fascinating facts and figures. All of which I’ve forgotten, but the upshot is that it’s a good job it was built, or else I’d be able to canoe to the shops several times a year. And I live on the first floor. 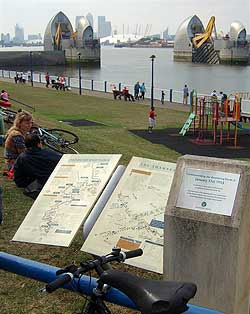 We also walked through the barrier’s service tunnel to the other side – not open to the public of course – and noted that toting a folder down there would give you another way of cycling across the Thames, a theoretical addition to the crossings listed and described in detail in my series earlier this year. (Obviously, there’s no way across the top.)

The Barrier has a visitor centre with cafe on the south side (right), a couple of miles beyond Greenwich on the glorious riverside cycle path that runs all along the south bank from central London to as far out as Dartford. It’s a lovely day trip. 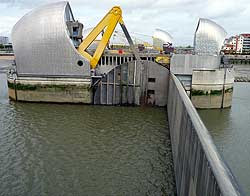 On the north side (above right), there’s a park with an unprepossessing entrance just south of Victoria Dock and near London City Airport, but the cafe is good and stylish and it’s another enjoyable biking destination.

Monopoly’s Water Works costs £150. What could this buy you there? Probably best put the money towards your water bill. Should cover at least a month or so.