The sun blocker I bought for the trip is working wonders. I put it on this morning at Penzance hostel as I set off. Immediately it clouded over, and rained heavily all day. 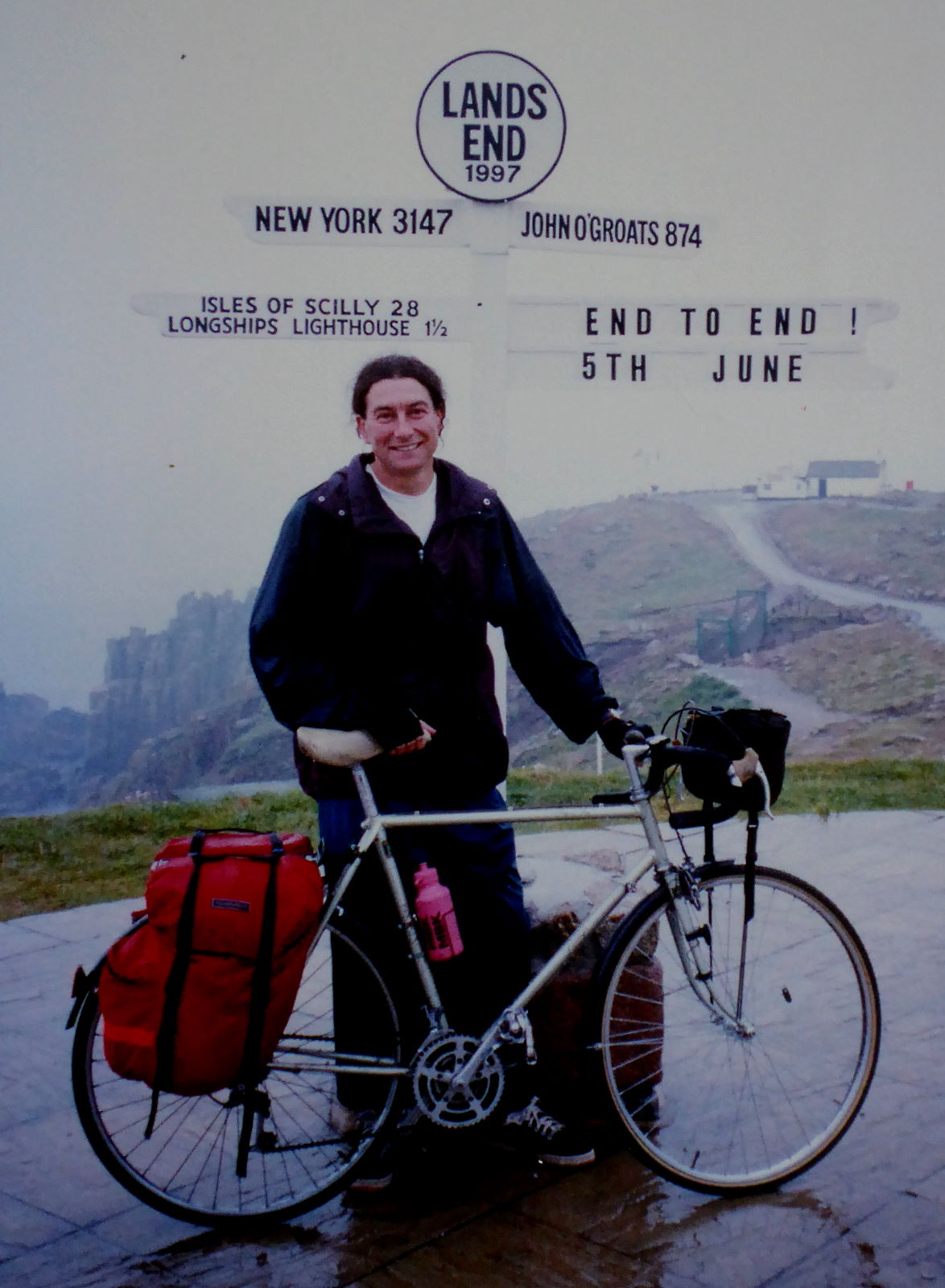 I swished through ten miles of puddles to get to Land’s End for the ceremonial start of my trip. The visitor centre at the end of the peninsula is cheesy, in a Kwik Save Budget Cheddar sense. I had a quick shufti at the museum of End to Enders, but mostly I just wanted to get my souvenir snap (pic) and get going into the downpour.

It was an exciting feeling, setting off to cycle the length of Britain. A major undertaking, but all I’d done to set it up was, er, take three weeks off work and get the train here. I certainly hadn’t done any training or fitness work.

Or research. Or route planning.

I had a Collins Road Atlas though, and I thought I’d tear out pages as I go, to save weight.

At St Just I stopped for breakfast at Warren’s, a bakery recommended by my guidebook. I bought a Saffron Tea Treat for 90p. This proved to be a squidgy bun the size of a pillow, crammed with raisins rather than saffron. It was a genuine local speciality, though, as the middle-aged lady in the shop confirmed, with tales of it as a childhood sports day treat.

I scoffed it at the roadside in the rain. The only sport possible today would be kayaking. Along the A3071.

By St Ives I was soaked through. I stopped for a coffee at a 1970s throwback pub in the harbour and borrowed a towel, but only ended up making the towel as wet as me. With the rain getting even harder I developed a new interest in modern art, and spent two hours in the Tate, because it wasn’t raining in there. I stroked my chin and nodded sagely at the Bridget Rileys and listened thoughtfully to melancholic music by Gavin Bryars.

I also took a tour. At one point I commented approvingly on a piece of white minimalist metal sculpture, only to be informed by the guide that it was a radiator. He waited for everyone to titter before turning it back and explaining that it was ALSO meant to be a work of art, so I was right all along.

After St Ives it was a long wet afternoon of hacking up the north coast through zero-vis mist and fog. At St Agnes I thought I might have a chance of getting local fish for tea, but the man told me it all came from Iceland. I still don’t know if he meant the shop or the country. 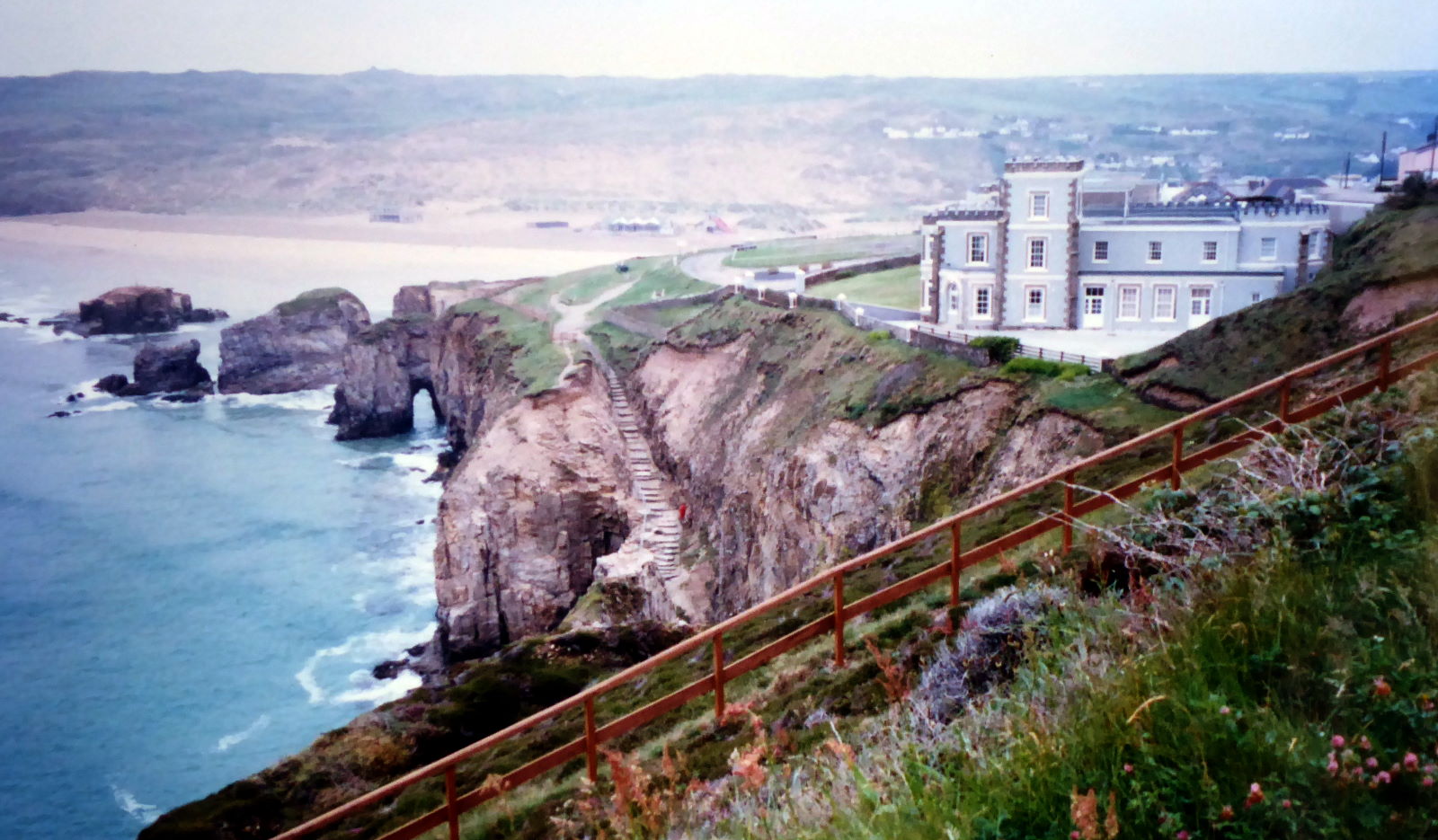 I dripped my way into Perranporth (pic), and looked forward to drying out at the hostel. But first I wanted to eat, and eat local, according to the self-imposed demands of my trip. I tried another fish shop, but they said it all came from London. They could only guess at the provenance; the smart money was on a sea of some kind.

But I succeeded eventually. In a convenience store I found some St Ives ham, and a Cornish pasty from Bodmin. I got myself some chips – well, at the very least, they’d been fried locally. In a Spar I sourced some strawberries from Helston, clotted cream from Redruth, bread from Plymouth, and ‘Cornish mushrooms’, which sounded like a euphemism for something, but at least that was breakfast sorted for tomorrow. Ham rating: Kenneth Williams.

At the hostel, I was downhearted to find the central heating had been turned off for the ‘summer’. There was no drying room, the dorms were freezing cold, and I was wet through. I took refuge in a pub on the harbour, the Seiner’s Arms. A seine is a fishing net, I learned from the historical notes displayed on the wall, along with several fishing terms new to me: huer (lookout man), cowl rooz (cast nets) and jowsters (fish hawkers). Must be interesting to play Scrabble with a Cornish sailor.

The pub itself was a Beefeater-steakhouse-style joint with piped music and nautical decor, all ship’s wheels and copper kettles, built on the site of an old pilchard curing cellar. Right now I was hoping for a cure of my own, for hypothermia. I self-medicated with a pint of Trelawney’s Pride, sweet and a bit watery, but with some lightly oaky body thanks to its wooden cask. Net rating: Fowler shoots, he scores!