It looked very hilly through the window of the 1557 from Bath, not always in the way I expected. We passed St Austell’s bizarre clay-trail spoil heaps, bleached and conical, Mount-Fuji-like, as if sketched by Hokusai in his experimental early woodblock series Thirty-Six Views of Cornish Piles of Crap. I wondered what Austell was the patron saint of; fly-tippers, perhaps, or hazardous waste.

Outside Redruth, the guard announced tonight’s winning lottery numbers. I didn’t win. He finished by saying ‘Eng kyaw’. Must be Cornish.

As I wheeled my bike out the station, Penzance – the most terminal of railway terminuses – felt a very long way even from my ‘West Country’ home. I’d thought we were nearly there when we passed through the remote-sounding Liskeard; that had been an hour and a half ago. 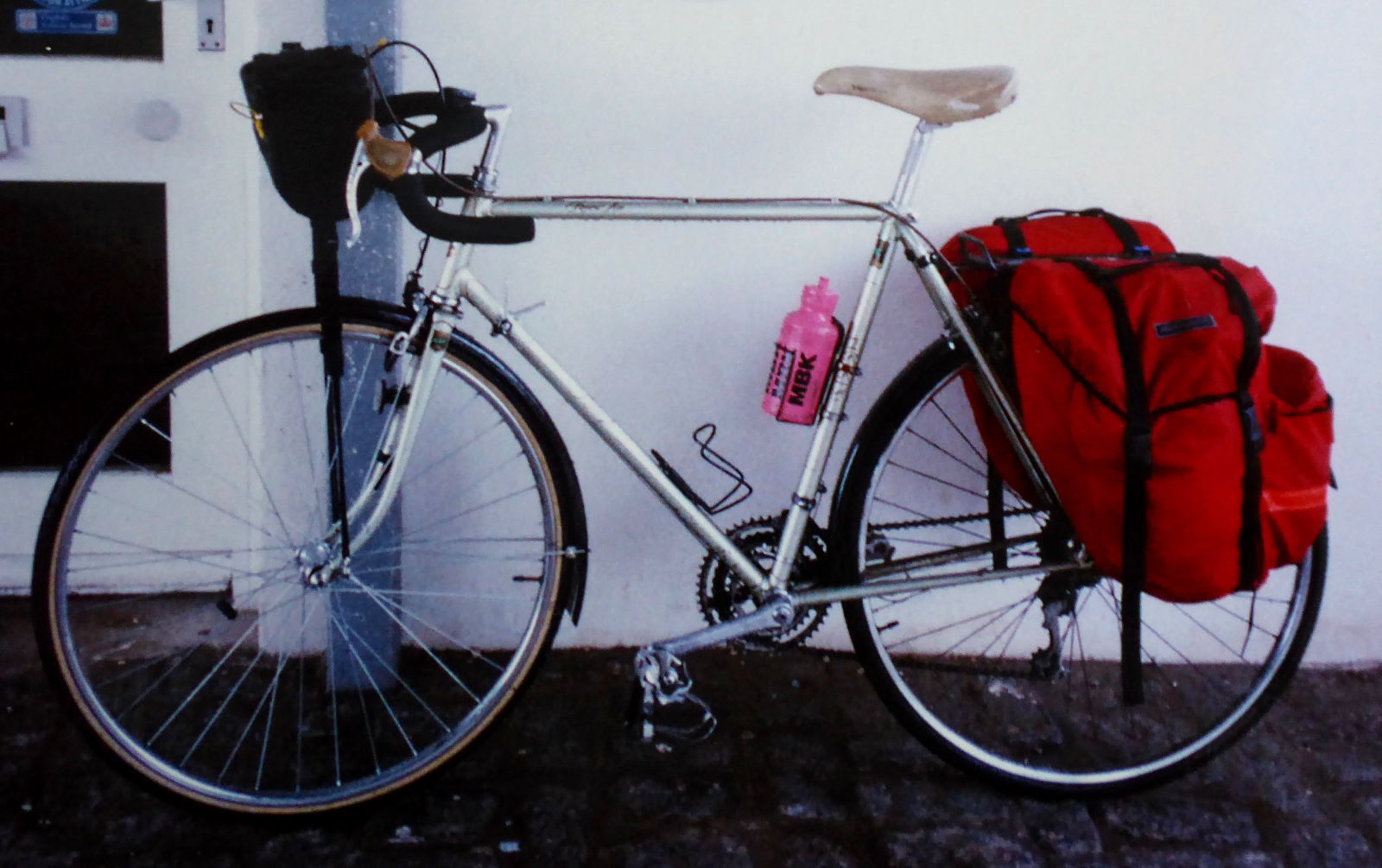 My second-hand, vintage, metallic green Raleigh Record Ace (pic) had shared the guard’s van as far as Exeter with a pile of boxes full of chicks. Typical: everything I do says cheep.

I’d talked to other cyclists who’d done the End to End. The ones who had enjoyed it most hadn’t pounded for a hundred miles a day on A roads to do it in a week. They’d taken their time, exploring the history and scenery, and had some sort of theme for their trip. One had visited cathedral cities en route. Another, football grounds. Someone else had eaten, drunk, and stayed, only at pubs called the Red Lion.

The food and drink angle was what interested me. This, I decided, would be the aspect of Britain I’d focus on over the coming three weeks – I was going to take my time too. Wherever possible, I would try to eat only locally sourced food, and try out any local specialities en route. Cheddar. Bath buns. Yorkshire pudding. Deep fried Mars bar.

And, of course local beers. And whisky. I’m a great believer in researching things first-hand, and not just looking things up on the internet.

My total food miles for the journey would, I hoped, be less than my total bike miles, helping me to save the planet single-handed.

It didn’t get off to a good start in Penzance tonight though. After checking in to the hostel I wandered the centre but nowhere was open, not even the chip shops. A pub offered ‘Cornish Curry’, which I didn’t fancy: it sounded not so much fusion as confusion. The convenience store only had fish which, like me, came from Hull, and pasties which, like me, had been transported that day from Bath. It looked like it would prove trickier getting away from national distribution networks than I hoped.

I hoped for more success finding local beer. The pub I chose for my last pints as a non-End-to-Ender was the Sir Humphry Davy, named for the local boy made good. His contribution to chemistry was enormous – he isolated, or discovered, elements such as potassium, sodium, calcium, strontium, barium, magnesium, boron, chlorine and iodine – and he devised the miner’s safety lamp, which had the convenient features of powerful illumination, and not sparking explosions. He was also a supporter of women’s rights, and keen on recreational drugs, so seems to have been way ahead of his time.

Those 19th-century mines were terrible places, dark, cramped, noisy, dangerous, and full of desperate men with no other prospects. All things which came to mind as I entered the pub. There were stern posters warning against underage drinking and drug dealing. Which was also appropriate, because Humph was a pioneer here again: he discovered the intoxicating effects of nitrous oxide, and gave it the nickname ‘laughing gas’. Well, after a hard day in the lab, you’re entitled to relax a bit.

Success on the local food and drink front! There was beer from St Austell ales. That was local enough. Top of the range bitter Hicks was smooth, warm-tasting, slippery and sweet, a touch watery, hoppy enough. Lamp rating: Four candles. I then had a XXXX Mild, fizzy, Coke-coloured, sweet, a tad flabby, with a treacly aftertaste. Lamp rating: My front bike light with fading batteries.

Not the perfect start to my culinary trip, but it would do. I ambled back to my hostel happy and even the snorers didn’t stop me enjoying a long deep sleep. Tomorrow we’d get down to business.

I’ve never had much of a head for business.