Famous for its gentleman’s clubs, Pall Mall is a third of a mile of grand buildings running from near Trafalgar Square in the east to St James’s Palace in the west (bottom right). 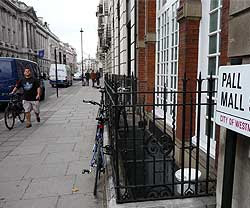 It’s one way westwards – meaning an irritating walk along the pavement if you’re heading eastwards (right) – and when you are heading the right way, it can be an unpleasant joust with pulses of fast-moving big traffic switching lanes around you, especially in the split right off up Regent St. 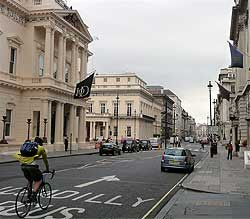 Parking’s a bit rubbish too, and all those gents evidently visiting their clubs by bicycle must end up chaining them to the railings. I once worked briefly at the Institute of Directors, in a building that used to be a gent’s club, and if that’s anything to go by they can be pokier inside than their imposing exteriors suggest. 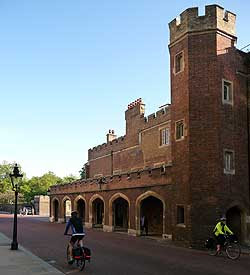 Pall Mall is also a brand of cigarette, which does suggest a kind of Smoking Tour of London by Bike. This could be my next series; perhaps a smoker could help me. We could go to (an) Embassy, then Kent, Marlboro (-ugh St), Mayfair, Pall Mall, Parliament, Strand, and finally via King’s (College Hospital) to Richmond (Cemetery).

Monopoly’s Pall Mall costs £140. What could this buy you there? The only club I could find membership fee details for online was the Oxford and Cambridge club, and that sum would buy you ten weeks’ membership. Or about one round of drinks while you’re there.