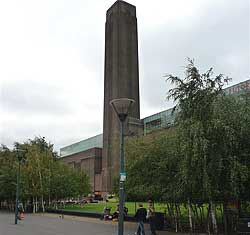 When Charles Darrow didn’t invent Monopoly in the 1930s, he can’t have imagined that in future your electricity company would also try to sell you gas, telephony, insurance and broadband internet. (We get our electricity from something called Eon, which hitherto I thought was a famous French transvestite, which shows you why I’d never cut it in the world of commerce.) 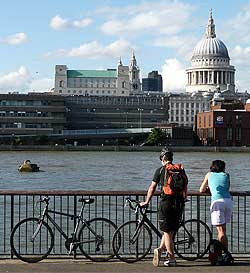 So, in the spirit of reinvention, we’ve chosen Tate Modern (above) as our Electric Company. Originally the site of Bankside Power Station, opposite St Paul’s (right) on the south bank, it closed in 1981 – to be reopened in 2000 as a big modern-art gallery. (Well, ‘modern’ in the sense of ‘after 1900’.) 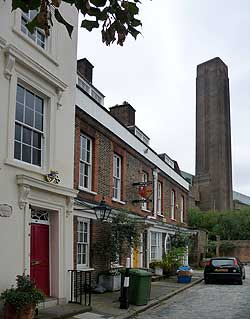 Tate Modern has temporary paid-for exhibitions, but most of it is free. Big stuff (usually the headline temporary exhibit) goes in the massive Turbine Hall, and often seems only loosely describable as ‘art’: at certain ‘exhibitions’ we’ve spent happy hours sliding down flumes and exploring circus-style adventure playgrounds and didn’t know we were being all clever and artistic. 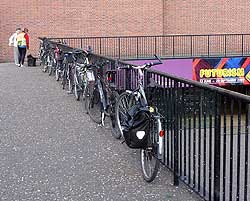 And Tate Modern is an excellent place to visit by bike, right on the riverside path that you can cycle (pretty much all the way) from Vauxhall to Tower Bridge. It seems OK to park on the railings right outside the entrance now (right, more convenient than the covered bike shed next to it): for a while earlier this year they put up notices saying it wasn’t allowed. That seemed to coincide with Barack Obama’s visit to London, a link I can’t quite fathom. 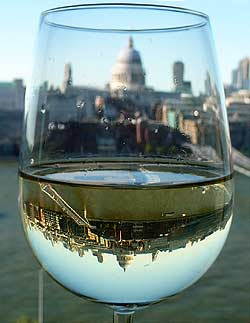 You can wander round the galleries and talk bollocks about the exhibits confidently in a loud voice, having ensured first that what you’re commenting on really is a work of art and not a lift or cleaner’s cupboard or something.

But even better is to visit the bar (right) on the top floor, which gives sweeping views of the river. And of someone trying to nick your bike if you’ve locked it to the railings down there.

Monopoly’s Electric Company costs £150. What could this buy you there? About ten bottles of wine in the seventh-floor bar – hence about ten visits with a friend, or five with a really good friend, or three with my brother.