I like cycling up Whitehall. It’s the nearest I’ll ever get to political power.

The half-mile of broad tarmac runs from Parliament Square up to Trafalgar Square, and its austere and imposing big buildings – appropriately, all light-grey – include several government departments and ministries (Admiralty, DoE, DEFRA, MoD, Cabinet Office, Health, Pensions, FCO, Treasury etc). Bike access from Westminster Bridge is easier than it was thanks to a recent right-turn filter that saves you going round all four sides of Parliament Square.

It’s always busy with buses and taxis. At the north end this can be a squeeze. Here it funnels up to the statue of Charles I, whose horse’s bum is the notional centre-point of London. You may well find it quicker to get off, mount the curious double-kerb pavement, and walk the last few yards up towards Nelson’s Column. 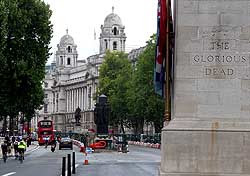 Towards the bottom end is the Cenotaph (right) bearing the sombre inscription to THE GLORIOUS DEAD, not a particularly encouraging message if you’re dodging the heavy traffic: I don’t want to be glorious just yet, thanks.

Though in fact the biggest danger to cyclists comes from the tourists taking pictures of the Horse Guards: po-faced, bearskin-hatted, horse-mounted chaps in Toytown uniforms halfway up Whitehall. The snappers do that thing of framing the picture, then suddenly stepping backwards three paces into the road in front of you. If I ever have an accident in such circumstances and sustain head injuries, no doubt some people will say it was my fault for not wearing a bearskin. 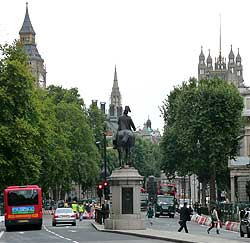 Cycle parking is notoriously absent here, because of the constant terrorist threat from bombs concealed in bike frames. The no-parking policy has been so successful that plotters have had to switch tactics and use less effective, lower-impact methods, such as attempting to blow up airliners. 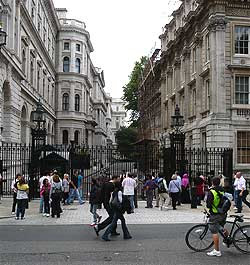 Downing Street runs off Whitehall. Until 1989 you could walk or cycle down it, right up to the coppers guarding the door of No. 10, where the Prime Minister lives. (I once went inside, to interview Norma Major. It’s surprisingly cramped and complicated inside, with lots of twisting stairs and connecting doors and half-levels. As for Mrs M, she was quite charming, bless her.) Now of course Downing St is gated off with rifle-toting guards (right) who would probably shoot your tyres out if you tried to ride past them.

Monopoly’s Whitehall costs £140. What could this buy you there? You can take a group of 32 people round Banqueting House, the magnificent building halfway up Whitehall. It includes the only surviving old bits of Whitehall. Or, if you’re a civil service department up for a meaningless award, £140 will just about buy one of your feckless web editors a place at the awards dinner here. Or, if you’re cheapskate like me, get a brief contract working for a civil service department as a web editor, win a meaningless award for a project someone else did the real work on, and see Banqueting House for free by coming here for the awards dinner. Admire the Rubens ceiling paintings, and ponder on the events surrounding the execution of Charles I here in 1649, perhaps making some fanciful link to our present-day monarchy.