With heavy rain forecast and time in hand – but also strong tailwinds – I wasn’t sure whether to get some wet miles in, or sit out the deluge for a day. Eventually – after about five seconds actually – the prospect of 24 more hours in Stranraer, and inevitable mania in consequence, was enough to persuade me to cycle on.

I went for cheap distance by cycling up the A77. It was miserable stuff: lashing rain, HGVs hurtling past throwing sheets of puddlewater at me, and some long grinding climbs through landscapes shrouded in wet mist. At least the tailwind propelled me quickly up the coast, though you couldn’t actually tell which side the sea was on, it was such vile weather. 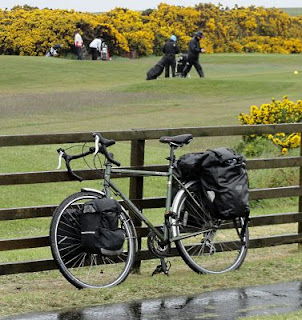 I rode through Turnberry, where some wet golfers splodged their way through some links course (picture). I couldn’t understand what they were doing, out there in the rain. No doubt they looked at me similarly.

South of Ayr, I got more free propulsion from the celebrated Electric Brae, an optical illusion that makes you think you’re freewheeling uphill. Here it is (picture) as you approach from the south; it’s middle bit of the line you can see running from top left to bottom right. And here it is looking back ‘down’ – actually, it’s downhill towards the camera. (I’ve blogged in more detail about this before.) It’s a remarkably convincing trick for the cyclist (picture), beaten only perhaps by Sustrans mesmerising us into thinking that stretches of rocky bridleway are a ‘National Cycle Route’.

I got to Ayr about half past one and decided I’d had enough of being soaked for one day. Especially when I found a single room in a budget hotel for £19 in the town centre. 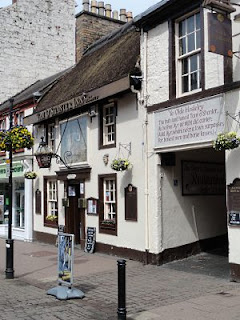 With the sun out in the afternoon I could explore the town, which has at least two famous sons. Poet Robert Burns used to frequent this pub (picture) and praised Ayr for its ‘honest men and bonie lasses’. Looking at the frankly incomprehensible nonsense he churned out, you can’t help think most of it was written here, shortly before closing time. 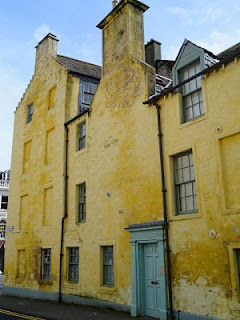 And round the corner is the birthplace (picture) of John Loudon McAdam, inventor of the road. Comparing my experiences on unmade bridleways and farm tracks to tarmac roads on this trip so far, I’m afraid Burns vs McAdam is no contest.