With most of my stuff in the tent in Stranraer, I could enjoy a single-pannier day, biking light down to the Mull of Galloway and back, to start the Scottish and final leg of the trip. Without camping stuff, clothes, Argos catalogues etc, the bike felt ever so light and twitchy.

The Mull of Galloway is the extreme southern tip of Scotland (picture). It has a lighthouse and a pleasant cafe and a great many cows, and was lively with visitors this Bank Holiday Sunday. From inside the cafe, on a clear day, you can see to the end of the queue. 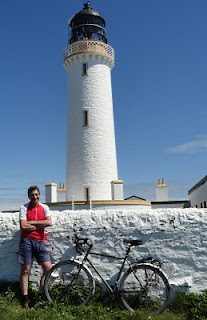 It’s rather more scenically impressive than Land’s End, and feels more ultima-thule-ish. It’s also more enjoyable, perhaps because End to End cyclists are poundshop-cheap at Land’s End, but here at MoG I felt a bit of a celebrity, giving my press conference in front of the lighthouse (picture). 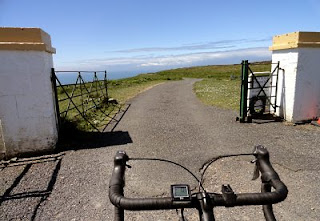 The official start of the final leg came about noon from the gates of the lighthouse compound (picture). From the direction you look in the photo, John o’Groat’s is directly behind you. 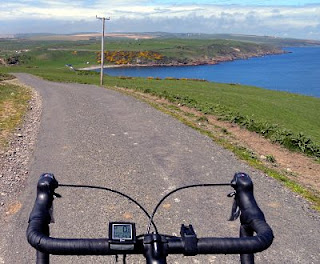 The afternoon was gloriously sunny and the scenery was delightful – lots of this sort of thing (picture). Of course it’s not exactly the Hebrides, but then, where is? 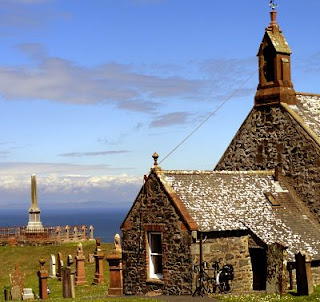 I went through Kirkmaiden (picture), the southernmost settlement pre-1707, and then the traditional counter-endpoint of Scotland to John o’Groats. According to rather dodgy old song, anyway. In fact, the southernmost post office and general store are in Drummore next door, but they were closed. 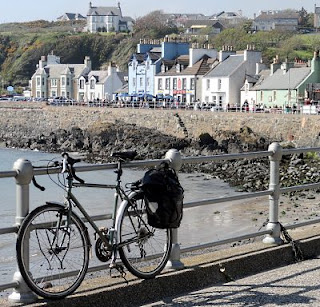 Some lovely lanes later I was in Portpatrick (picture), a touristy but pleasant harbour town west of Stranraer, vibrant enough to have a fine ruined clifftop castle, gastropubs, and pavement cafes with al fresco musical entertainment. Stranraer may be shabbier and have far less in the way of London-price ice-cream parlours, but at least it doesn’t have backing-track singers doing Dexys Midnight Runners covers in the main street.