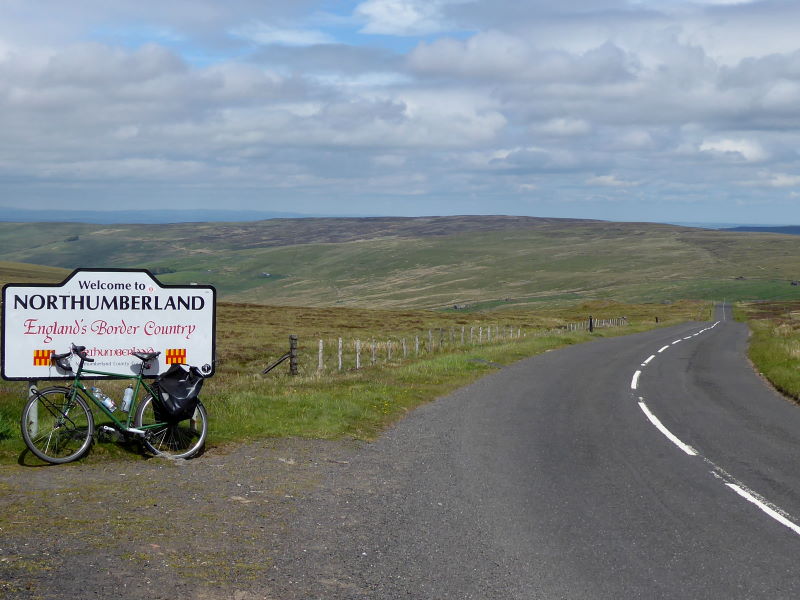 Dales, moortops, bits of the C2C, England’s third-highest road and the very centre of Britain (maybe): there was plenty of variety today, as well as breathtaking climbs and descents.

Haltwhistle, further along the Newcastle–Carlise rail line from Hexham (which may give you a clue as to how I had a slap-up breakfast and still got there by 8.30am), styles itself as the ‘Centre of Britain’. This is based on the somewhat arbitrary basis of its being halfway east–west along Hadrian’s Wall, and halfway north–south between the Lizard and, um, the Orkneys.

It’s debatable exactly where the mathematical centroid is, in other words, the point on which the island of Britain could be notionally balanced: the Ordnance Survey reckons it’s near Dunsop Bridge in what is now Lancashire, which I visited on a previous ride.

It also has a talking footpump that tells you the town’s history in a local accent (‘if you look down between the Chinese takeaway and chip shop, you can see ancient remains…’), three car-free bridges over the river, and a plaque commemorating the hanging of a woman in 1519 for the crime of marrying a Scotsman, so it’s well worth a visit.

Anyway, I took NCN68 south, the Pennine Cycle Way, along the railtrail that was the line to Alston up until the 1980s, a victim of Long Beeching. The trail is tarmac for the first two miles, then decent gravel, but there’s a bit of a problem with Lambley Viaduct. It leaps over the South Tyne in spectacular fashion, and cyclists and pedestrians can enjoy superb, car-free, views from the top.

What they can’t enjoy is to continue south across the other side, because it’s now a private home, and a fence bars your progress. You could just about lug a light bike down the steps and along the footpath to Lambley village, but with panniers I preferred to return back across the viaduct and take the cumbersome signposted detour to regain the railtrail further down.

Splendidly scenic, untrafficked, sometimes steep but mostly ridgy-flat lanes took me to Alston, where I stocked up on marked-down sushi from the Co-op for lunch.

Ah, I stayed here with friends in 2001 or so, cycling the Coast to Coast. We observed rival chip vans engage in some sort of trade war outside the pub at closing time, after being unsuccessfully chatted up by some local lasses in the pub. That was more a comment on how few people passed through than a comment on us, or them. Anyway, they’re probably grandmothers now.

Rather than take the Sustrans route down to the valley bottom south to Garrigill (and briefly join the C2C route) I took the B6277 which not only preserved a lot of altitude (it goes on to be one of England’s highest roads) but was also stunning and very, very quiet.

Indeed, England’s highest six roads are all round here. I fought my way up and over Dowgang Hush, at 599m No 5 in the list, and plunged down to Nenthead.

I spurned the chance to visit Killhope Cross a mile beyond (at 626m the joint No 1 in some listings), but struggled on instead up to Black Hill, at 609m No 3, where I had my sushi lunch sheltering from the feisty wind in the lee of a drystone wall. All characteristically Pennine – austere, raw, gritty – but then you can’t expect too much of supermarket sushi.

I peeled off the Coast to Coast route and headed north up West Allendale, on some fabulous downhill with excellent views, and then the gradual climb over the top (past another Black Hill, in fact) to East Allendale, and a glorious hurtle downhill with sensational views all the way to the small town of Allendale itself.

I sat on the bench in the shade in the central square and dreamt of an ice-cream, when hey presto, the ice cream van from Alston – perhaps fleeing the crossfire of a chip-van war – turned up. Not exactly fairtrade organic sustainably sourced, but by gum I enjoyed it.

With a brisk westerly helping me home, I blitzed a series of quiet back lanes taking me mainly downhill (past the racecourse, one of England’s more splendidly set, in a natural amphitheatre) to Hexham. I met up with Tim, who had been engaged in other research today, for a debrief, and a continued search for a decent pint, with only limited success.

e2e.bike > Other > Route research > Hexham 3: Pennines mightier than the sward