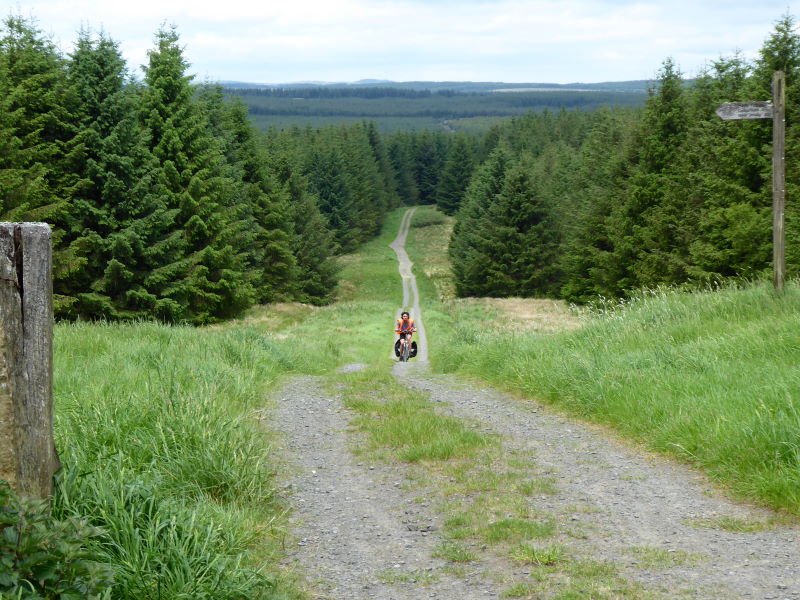 Hadrian’s Wall has many things in common with the Great Wall of China, such as not being visible from the Moon. It was certainly visible from our circuit today though, on quiet narrow lanes, in, over and through some big Northumbrian landscapes.

From Hexham we struck north past the old Roman fort at Chesters, and alongside some lumpy bits of ground that showed where the Wall once was.

We carried on up to Wark, with its engagingly basic bridge over the North Tyne.

Resurfacing works meant my intended route was impassable, but some laney alternatives – clambering up and down the hills past rarely-visited farms, and with sweeping views at their tops – got us to the east-west Roman Road bounding over the moorlands just north of the Wall.

It was easy to imagine life in ancient times here, with fearsomely tattooed, primitive, indigenous tribesmen would violently protect what they saw as their exclusive territory. Especially when we were sworn at by impatient drivers sent down the single-track road diversion from the roadworks who wanted to muscle past us.

At the western end of the Roman Road – with those diverted drivers thankfully siphoned off – we turned south down NCN68.

I felt like a cocktail at the end, by which I mean, thoroughly shaken. The tarmac surface suggested by the OS map is in fact a jolting forest road for half-a-dozen kilometres: great for loosening nuts and bolts and teeth, less good for Tim’s small-wheeled folder. Still, there was plenty to enjoy scenically, particularly for fans of post-desolation forestry and logging technique.

We lunched just before the welcome reappearance of the tarmac, screened by trees from the headwind we’d had so far. From here it was tailwind, and smooth lanes, and pretty awesome Hadrian’s-Wall scenery, all sweeping views and sheep: essentially, NCN72 back to Hexham.

One of the very best bits of the Wall is just above the Sill, a spiffy new cafe/hostel/visitor centre that has good cycle parking for up to, er, six cyclists, complete with bike tools and a pump. There’s some of the original barrier, and views of rugged ridges, tarns and hillsides.

Vindolanda, the magnificent Wall museum and fort remains, is just down the lane. Tim explored that, though I had a sudoku to finish, and sat happily in the sun outside, spotting my X-wings, swordfish, and even an X-Y wing.

From here was a delightful scoot, downhill much of the way and with a helpful breeze: back to Hexham, on the almost car-free Stanegate, a straight and smooth lane with views all the time.