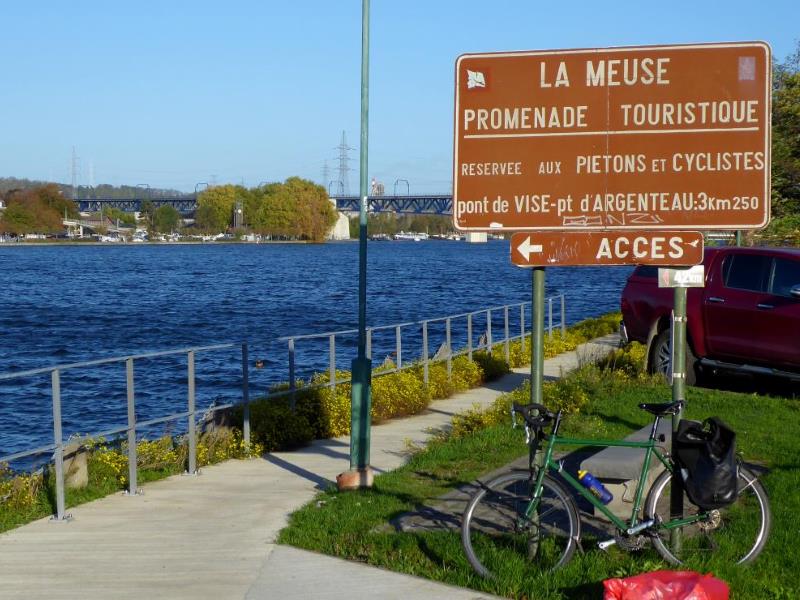 I rode like the wind today. Not surprising, as it was a hefty southwesterly, and I was heading north-east. The w-assist powered me up the banks of the Meuse into the Netherlands which, unlike Belgium, was not closed for All Saints’ Day today.

Riding along the river round Liège (which I’m researching for an upcoming magazine article) is great for fans of architecture, particularly exposed pipework and industrial silos. The built environment along the towpath was evidently inspired by the Pompidou Centre and acromegaly, interspersed with low-slung anonymous factories shaped like Ikea furniture. There were piles of raw materials looking very raw: sand and white pebbles like wrong-scale Sahara dunes or Swiss alps.

But it was sunny and pleasant and I whizzed along, over the border and into the Netherlands. No need for border signs: you know when you change country by the suddenly improved cycle provision.

I got to Maastricht and wheeled slowly through the cobbled centre, then out along main roads, serviced by good-to-excellent bike paths of course.

Mostly it was straight, as straight as a Roman Road laid out by a straight bloke with a precision ruler.

After a long stretch of straight lanes, there was some more straight, then a section which didn’t deviate either way, then a curve-free bit, followed by a rectilinear path that led to a route whose projection onto a horizontal plane perfectly fitted an equation of the form y=mx+c.

I reached Roermond at twoish. I walked round the historic centre enjoying the lively non-holiday atmosphere, buzzing with pavement cafes and bars, which seemed to represent 90% of the local economy. No cars of course – just peds and bikes and a few urgent e-bikers delivering fast food – and rather than car horns, the only sound outside nature was that of the carillon bells.

I now had a choice. Either I turned round and cycled back sixty miles into a brisk headwind; or I had a cheap friendly kebab and beer in the cheap streets away from the touristy centre before getting a train back. Perhaps you can guess which I did.