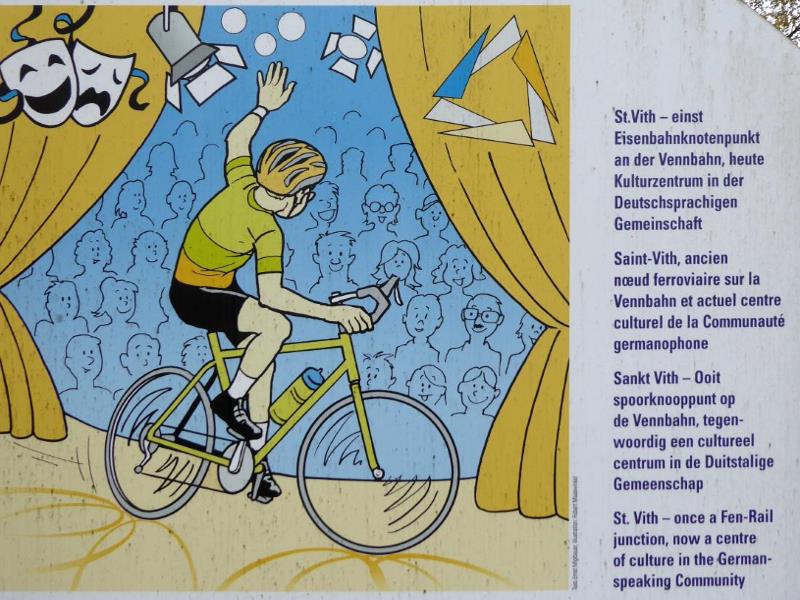 A short day today: just two dozen miles or so of riding, finishing the Vennbahn from St Vith to Troisvierges just inside Luxembourg. This part of the route, unlike the previous 55 miles, mixes quiet streamside lanes, tarmac paths across farmland, and the odd gravel road with the railtrail sections, almost – but not quite – like a Sustrans path in England.

I’d enjoyed the luxury of a dorm to myself last night, so could catch up on sleep in a snore-free environment. By nine I was on my bike, rippling through the foggy autumnal morning, crunching through leaf litter and flexing my gloved fingers to keep the blood going.

The Luxembourg border was discreetly signed, and I read information panels on the path with interest. Apparently petrol tourism is a problem: Belgium’s thrifty motorists drive over the border to enjoy Luxembourg’s cheaper fuel, causing congestion and pollution, and also robbing Belgium of tax revenue.

Ups, downs, lanes and paths, and the odd tunnel we had to cycle round because bats live there. The Vennbahn finishes at Troisvierges train station, where I caught a very large and very empty train with enough cycle space for a peloton to Liège, back in Belgium.

This was also familiar from my End to End: Calatrava’s sweeping station building at Guillemins, the Meuse’s riverside bike paths, but especially the hostel and the nearby supermarkets with their enticing shelves of marked-down food, and inexpensive super-quality Belgian beers.