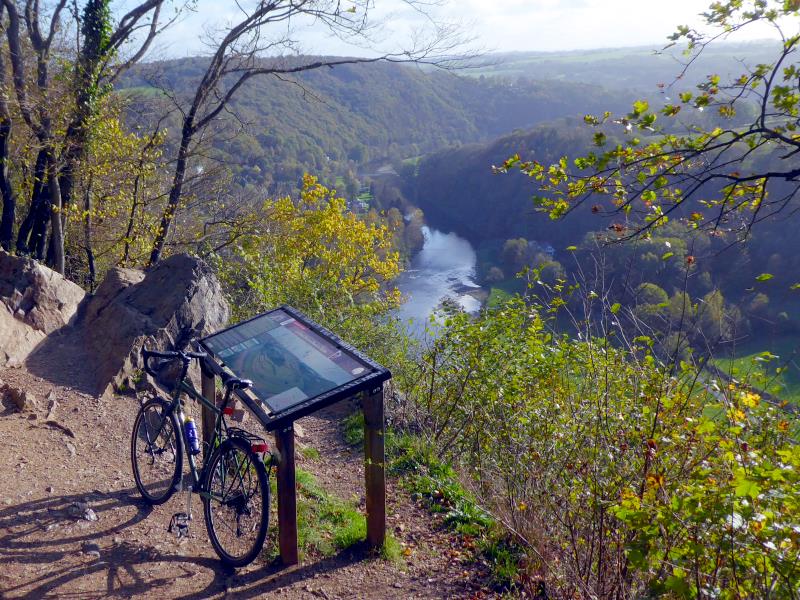 Liège–Bastogne–Liège is a notoriously tough one-day annual cycle race. It’s a classic of the calendar, particularly the bit of the calendar just before the end of spring when it still might be horribly cold, wet and snowy. It’s nicknamed La Doyenne, ‘the old lady’. No wonder it’s sometimes also nicknamed Neige–Bastogne–Neige.

Cycling the 260km of the fairly consistent modern course in a day is of course not a challenge I shrank from. Because I simply ignored it. Instead I decided to come up with my own, much shorter, pleasant and easy micro-version, doable in half a day from Liège. And, of course, taking in a couple of the route’s many notorious short-but-cumulatively-horrible climbs.

So I rode south along the Ourthe riverside route down to Aywaille and back, enjoying – yes, enjoying – two of the classic ascents of LBL: La Roche aux faucons, outside Esneux, and La Redoute, outside Aywaille. It proved a fine decision on a fine day, on which the threatened stiff winds failed to show up.

It started with a calm, cool run down the river to Méry, where it got warm, and so did I – especially as I climbed the kilometre or so of 1 in 10 up out from the village. At first I was underwhelmed – this could be a country lane anywhere, with trees blocking all views. But then I got to the viewpoint for the Roche aux faucons, ‘Falcon Rock’. The riders of LBL whizz past here seeing nothing but back wheels, but I could stop and push my bike the few metres up a path through trees to a majestic viewpoint.

This was wonderful, giving a clifftop view directly down over a great bend in the Ourthe as it circuits through lush green hills. It’s all very reminiscent of the view from Yat Rock at Symond’s Yat in Wales, where I was earlier this year while cycling the Wye. And it was glorious weather for it, all deep blue skies and dark greens, like someone was nudging the saturation balance in Photoshop.

I zoomed back downhill to Méry and followed the riverside I’d just been looking down on. A lesson: don’t feel smug when you look down on something, because you might be there yourself before long. I should be on Thought for the Day.

The long stretch of riverside paths, most completely car-free and falt, took me through the touristy village of Esneux and its cafes, and eventually to Rivage, where I had a biscuit.

A few kilometres of pretty quiet mainish road took me to Aywaille, which had some decent leisure riverside paths.

The climb to La Redoute rises up from the village’s eastern edge. Ventoux or Iseran this ain’t. It’s a winding country lane that huffs and puffs its way up a green hillside full of quizzical cows – no more challenging than many thin yellow lines on OS maps of Wales or southwest England, but in the context of LBL it’s crucial. The mile-ish of 1-in-10ish comes near the end, 230km in to the huge day that’s already seen many such climbs, and often proves decisive for the winner.

Like any good continental cycling climb, it has exciting messages written on the road by fans with spray paint. Rather mysteriously, the name ‘Phil’ is written about two hundred times. There are slogans: ‘Watch Women Cycling’; ‘Pushing Dreams’. And countless names, some recognisable, many not.

There’s a monument at the summit marking the Austrian War. As England wasn’t involved I didn’t have to feel guilty. The view back down over the wary cows to the luminous hills and distant forests of the Ardennes could almost be Hertfordshire or the Welsh Marches. It was all very agreeable.

I zoomed back down to Aywaille (pronounced ‘A-Y’) and enjoyed a Karmeliet Tripel in a local taverne, Le Victory, before my train back to Liège. Not LBL but LAL: Liège– Aywaille–Liège. And not La Doyenne, but La Moyenne (‘average’). But that’ll do me.