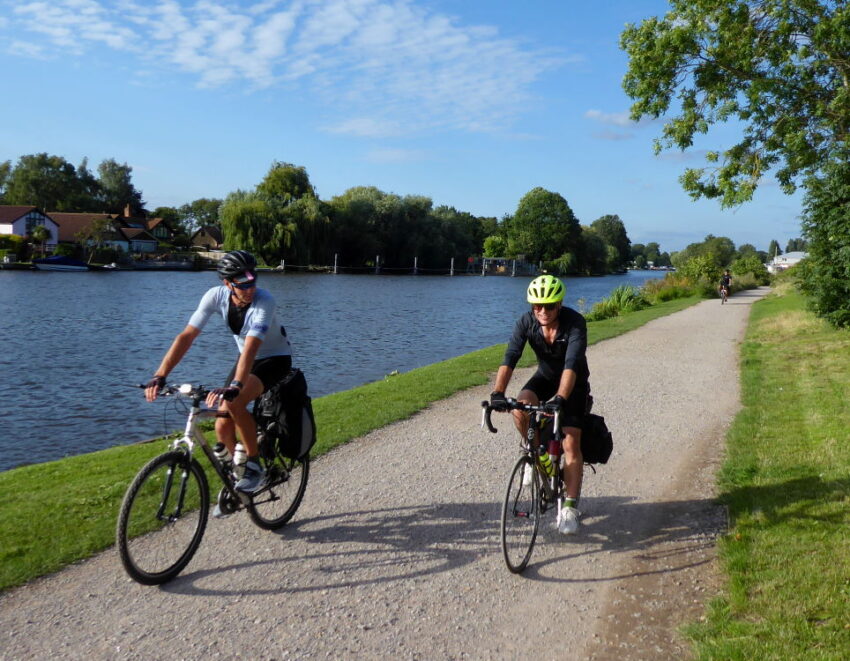 In the Top 10 of world river cycle paths, the Thames comes about 86th. Because most of it isn’t cyclable.

However, the stretches between Staines and Putney, and a few miles round Greenwich, are fabulous. For these bits, and for some canals and cycleways round the centre of London, I was serving as unofficial guide on a three-day bike tour to a group of my brother’s friends.

It proved a very sociable and entertaining trip. We met lots of new people, such as bouncers and security guards. Fortunately for us, the CCTV images were too indistinct to bring charges… Nah, only joking. All was above board.

Anyway, the first day of the trip involved canals, parks, Buckingham Palace, a possible sighting of a former Prime Minister, no sightings of parakeets, and a hotel that could have come right out of a Mediterranean resort. Because it was a building site.

The group morning rendezvous was at King’s Cross, and we cycled west along a sunny Regent’s Canal towpath, crossed Hyde Park on Dutch-style segregated cycle paths, and stopped for refreshment at the cafe overlooking the Serpentine. John entertained us all with his impressions, and the police let us off with a caution.

I was travelling with plenty of luggage capacity, four panniers in all: two for clothes, tools, maps, electronics and snacks, and two to store empties.

We rode past Buckingham Palace. I’m always full of admiration of the British system when I pass it, mainly at how state benefits can support the unemployable. Thanks to the recent segregrated cycleways, this was all traffic- and hassle-free, right past the Houses of Parliament and pretty much as far as Waterloo. We took a train to Putney: riding there would have involved stretches of road, used a cumbersome and often non-river route, and eaten up time that could be more profitably spent at a riverside pub.

From Putney to Shepperton was 15 miles of virtually uninterrupted, virtually all traffic-free riverside riding. En route we possibly saw a smiling Theresa May walking along the river bank. No doubt she was smiling in the knowledge that, having been PM between David Cameron and Boris Johnson, she couldn’t possibly be the worst leader we’ve ever had. We passed Kew Gardens, where there was no sign or sound of the famous parakeets.

Actually it wasn’t quite ‘uninterrupted’ riding. We interrupted it to have a beer or two and sandwich at a pub in Richmond. The sandwich tasted like a million dollars, which was roughly what it cost.

Gentle, flat, delightful riverside took us easily to a sunny Hampton Court, and on to Shepperton and our hotel. We were very impressed to see so many staff all hard at work. Unfortunately they were builders, busy refurbishing the bar and restaurant area. Here’s a tip for businesses who omit to describe issues on their website while still charging normal full price for their services: beware of groups of blokes from the north with a background in the car trade, because they’re probably very, very good at negotiating discounts.

Still, we had a fine evening stroll to a nearby pub on the riverside, enjoying some very good quality food, craft beer and wine on an outside table overlooking the water. I like cycle-touring.