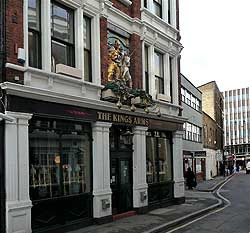 Where is it? The King’s Arms, a pub at 65 Newcomen St, just off Borough, a bit south of London Bridge.

What’s quirky about it? Its coat of arms is the only surviving bit of the original, medieval London Bridge, the one that was always falling down or burning up. 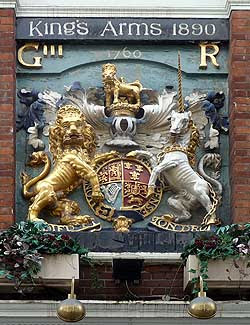 The arms come from the bridge’s southern gatehouse, and were added on to the medieval bridge in the 1728. (Presumably that ‘1760 GIIIR’ stuff is a later addition.) That bridge was replaced by a new one in the 19th century, which was in turn taken up brick by brick and shipped to Arizona, and replaced with the concrete bore we know and do not sing about today.

Why bike there? Borough Market; Southwark Cathedral; the bike-friendly and historical George Inn just down the road.