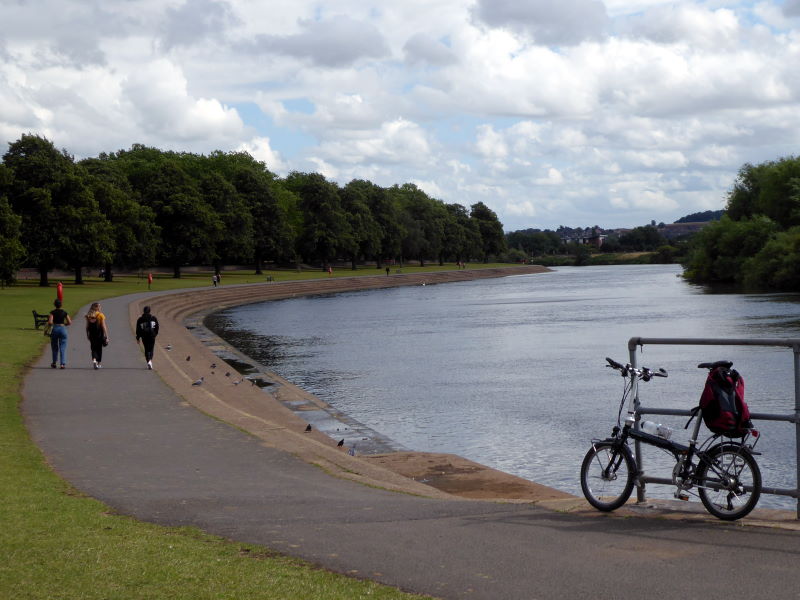 ‘A journey of a thousand miles’, Lao Tzu said, ‘begins with a single malt. But a pint will do.’

Medieval pilgrims en route to the Holy Lands would, it’s said, start off with an ale or two at Ye Olde Trip to Jerusalem, a pub that’s been refreshing travellers since 1189.

(It claims to be the oldest in Britain, but so do many pubs. One of the most convincing candidates is the Bingley Arms outside Leeds, which I dropped in on recently.)

I was not on a sacred journey, unless you count visiting Trent Bridge yesterday to see the cricket. (England were struggling against India.) In the morning today, I’d been out to research a cycle cafe – Velo Verde in Screveton, a few miles northeast.

(It’s a corker: everything you’d want a bike cafe to be, from coffee and cake in the expansive outdoor table area, to regular cycling events, to staff T-shirts with DOMESTIQUE on the back. Nice gag.)

But I was back in the centre, and about to set off on a journey-of-discovery of sorts – riding along Nottingham’s newish segregated N3 cycleway, and its recent Big Track route – so the preparatory pint at Ye Olde Trip to Jerusalem seemed appropriate.

That N3 runs out west from the castle rock (into whose face some cave-like snugs of YOTtJ are hewn) about a mile along Castle Boulevard. It’s a pretty good example of the genre, with cyclist priority baked in to many junctions, and sensible routing round bus shelters. By British standards, anyway.

Today I also rode the Big Track, a ten-mile leisure circuit that runs entirely offroad from the centre out west along the Beeston Canal, returning alongside the Trent and taking you past Trent Bridge.

It’s a very good route. The canal towpath is all sealed and smooth enough, though you wouldn’t want to skate it, even with skates. At the western limit the path turns back to join the Trent on a new-looking path of smooth fine gravel. It’s rarely wide enough to ride alongside someone though, so there’s little chance of having an intimate conversation. Or an argument, so, swings and roundabouts.

After a couple of miles of Trentside stuff, which is very rural and calm, you’re back in the city. Stretches of tarmac alongside roads soon become the wide, smooth, delightful last leg alongside ghat-like steps. Nobody was out bathing today, though.

It was very peaceful here. Even at Trent Bridge, which wasn’t good news: the crowd silence was a giveaway that England were still struggling.

Unlike Joe Root and co, however, I’d had a good day.

Anyway, I finished my journey between Ye Olde Trip and the start of the N3 at the entrance to The Park Estate, a Victorian residential development with many listed buildings and some delightful quirks (such as a curious tunnel).

The Park Estate is privately run, and not on Google Street View. And vehicle entry is not possible for non-residents.

Which means Airbnbs are sensationally cheap, as most people can’t face the prospect of leaving the car ten minutes away and hauling a wheelie case half a mile.

No problem for cycle bloggers with a folding bike and a thirst, of course…